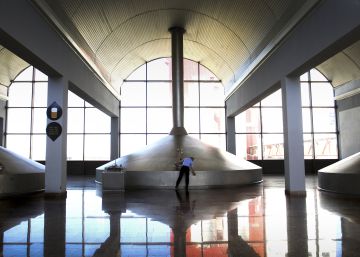 One of the latest initiatives of Mahou-San Miguel, the leading brewer in Spain, has been Solana, an online store where, in addition to the firm's beers, it sells socks, briefs, umbrellas, backpacks, key chains or aprons. That a beer company sells socks or that the store is called Solana might seem like occurrences, but in reality they say a lot about a company that, in the hands of the founding family since 1890, enjoy enviable health and moves to strengthen its position in Spain and increase its presence abroad.

Brígida Solana was called the matriarch of the family and founder of the company in 1890. She named her husband, Casimiro Mahou, who had passed away a few years before, without seeing her dream of setting up a brewery come true. The descendants of Brígida and their five children are still at the helm of the company, which in 2018, with the incorporations of San Miguel (2000), Alhambra (2007), Solán de Cabras (2011) or the most recent participation in the US Founders and Avery, the Barcelona nomad and Bilbao La Salve, in addition to the Waters of the Orotava Valley (Tenerife) billed almost 1,300 million euros, 3% more than a year earlier, and obtained a profit of 124.4 million , 2.6% less.

The members of the sixth and seventh generation of the Mahou family, through the equity companies Las Tejoneras (50%), Sociedad Gala de Inversiones (27.15%) and IPL Gala Internacional (22.69%) own the company 100% and obviously occupy all the positions of the board of directors, chaired by José Antonio Mahou Herráiz. Successive descendants have been incorporated into the council, to ensure generational relief.

It would be most normal to think about disagreements between the different family branches that coexist in the council, but company sources say they are minimal. "Moreover, all decisions (acquisitions and other strategic movements) are taken unanimously," said sources. Unanimity, of course, can delay the decision. "There are dynamics of dialogue until the agreement is reached," said sources.

However, this unanimity requirement has not prevented the company from moving much in recent years, to gain international presence and to renew the product range, orienting the focus towards the artisan sector and the premiumization (special beers, more expensive, that help to grow in value if the volume stagnates). As Celia Rodríguez, a beer specialist at the consulting firm Nielsen, comments, beer consumption in Spain in 2018 barely grew 1.5%, while the business did 5.2%. That is, the increase in turnover was due in large part to the increase in prices.

In this regard, Mahou has taken overseas positions in recent years. After a cautious start, he now owns 90% of the American brewer Founders and 70% of Avery, also in the US. It has a distribution business in Chile (Mahou Andean) and beer manufacturing in India (Mahou India), although in both cases the results are still negative, especially in India. It also remains to be seen how it works the agreement reached in September with Ab InBev, the largest brewer in the world, to produce and distribute some of its brands in Spain, such as Budweiser or Corona. The alliance implies that Mahou will have to distribute among its clients the brands of the Belgian giant, which means placing the competition in the same bars and shelves as the own brands. As for exports, Mahou-San Miguel sells about 13% of its volume outside of Spain. Given the stagnation of consumption in Spain, the strategy is to increase the external item by at least up to 20%.

Perhaps some inner hole is more significant. With a 32% share of total beer production in Spain, according to data from the Cerveceros de España guild, Mahou's presence is very important in the center, especially in Madrid, but other brands are expanding with more zeal for the rest of the country, gaining market share. However, it has also extended the networks in the national market, with the purchase of San Miguel, Alhambra, or investments in Nomad, La Salve, or Brutus, the latter with a clear orientation for the craft or artisan segment, a of the most pronounced trends of recent years.

“The market is going towards the premiumization, towards the diversification of the portfolio, looking for new varieties for new moments of consumption, beyond the traditional appetizer ”, explains Rodríguez, de Nielsen. Mahou has responded to this trend with acquisitions and new products, such as Mahou Barrica or Maestra, San Miguel Magna, Alhambra, Casimiro Mahou ... The goal is that innovations, varieties with less than five years in the market , more expensive in general, suppose 10% of sales in 2020. However, you can not lose sight of their traditional versions, because, as Rodriguez explains, an economic slowdown would be noticed before in the premiums, apart from the possibility that excessive premiumization ends up on fewer occasions of consumption.

Despite all the corporate operations and investments, such as the plant in Alovera (Guadalajara), which has taken close to 120 million in the last decade, the group has barely any debt. At the end of the year 2018, it does not reach 100 million euros, including the bonds that are charged to customers for the packaging and that must be returned. It is the company's policy to "keep a low debt profile", and the Mahou take it to the letter. The company boasts "the virtue of financial prudence," which does not exclude recourse to debt if an operation makes it necessary. "We were already in debt in 2000, with the acquisition of San Miguel, but fast payment was chosen," company sources recall, but in general "it is preferred to address growth with own resources." That prudence has served to build muscle and keep voluntary reserves for more than 1,200 million.