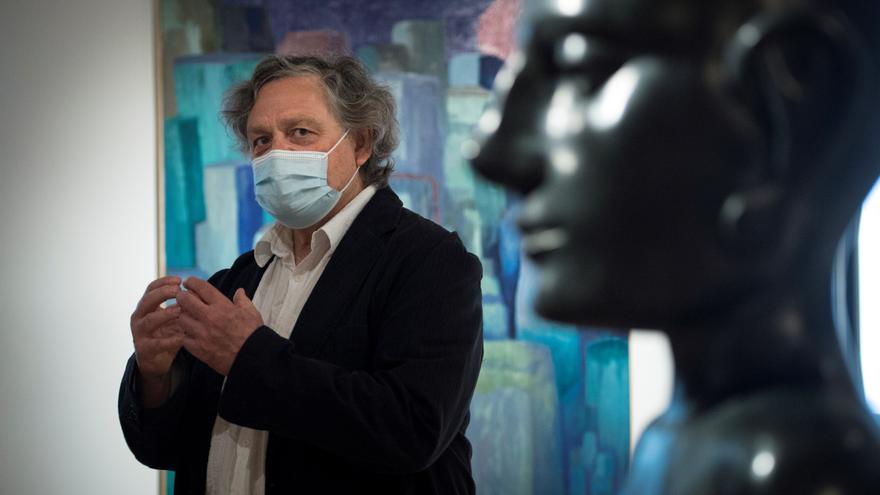 Madrid, Jun 1 (EFE) .- The magical realism on which Jaroslav Róna's work is based lands in Madrid in an exhibition at the Centro Sefarad-Israel, in which the Czech painter and sculptor presents the product of his dreams, Photographs or stories that you have read or have been told.

Róna, a descendant of Czech Jews, is considered one of the most original Central European artists today, and his varied artistic production can be seen in the exhibition hall of that center from this Tuesday until July 30, under the title "Jaroslav Róna: Paintings and Sculptures ".

Curated by Lucie Rónová, the exhibition integrates sculptures such as the miniature of her iconic "Giraffe", 10 meters high, red and bronze, the "Ge-man", an alien accompanied by his dog, also an alien and both made in bronze, and "Seated Lioness".

Among the paintings are: "Bolshevism according to Churchill", "Franz Kafka in Triestre", "The guardians of hygiene" and "The strange story of JB", among others.

Róna paints in oil on canvas and sculpts in bronze, but also in granite. He admits that he likes to move "in a slightly transformed reality," as he tells EFE, and his works are the result of dreams, photographs or stories that he has read or been told.

"If I have to pigeonhole myself in an expression, it would be magical realism, although it is close to surrealism as well," which avoids his traditional decorations.

His main theme is devils and he represents them with a pleasant appearance, to show that within themselves they can contain evil.

His paintings allude to death, war, archaic myths and nature, some of them covered with a particular humor, as is the case of "The strange story of the artist JB", in which he alludes to the legend of the pilot German Joseph Bois, who fell during World War II in a remote part of Russia where a strange nation protected him by covering him with grease and blankets.

He also creates from religious themes, some related to the Old Testament. However, as his family was not a believer, throughout his life he had to "find the way around this question; I am currently a believer, but not traditional. I would tell you that I believe in the energy of life ”, he explains.

Róna's family had to go into hiding during World War II in Slovakia and Hungary. He would study at the Institute of Plastic Arts in Prague: “There they taught us to use a single type of artistic figure, for commissions of socialism. The classes were totally focused on the human figure and a feeling of aversion towards them was formed in me ”, he comments.

His desire to liberate art from communist ideology led him to found the group "The Stubborn ('Tvrdohlaví' in Czech)" and from that moment on he deviated from the trends of the time and began to paint mainly animals. "The first were dinosaurs and their bones," explains the artist.

His relationship with the figure of Franz Kafka led him to sculpt a monument in his memory in the Jewish quarter of Prague, to participate in the film "Amérika", based on a novel by the writer, and to paint "Franz Kafka in Trieste", a painting in which he represents a dream of the writer in which an angel with a sword pursues him on his visit to the city.

In addition to being inspired by writers such as Kafka, Orwell or Allan Poe, his work has been influenced by his travels.

"When I went to Mexico and saw the figures of Xipe Totéc (Mesoamerican god), I decided to make a statue of a robot in granite that would hold the skull of the last human" ("Victory of the robots") referring to the triumph of technique and at the end of humanity, says Róna.