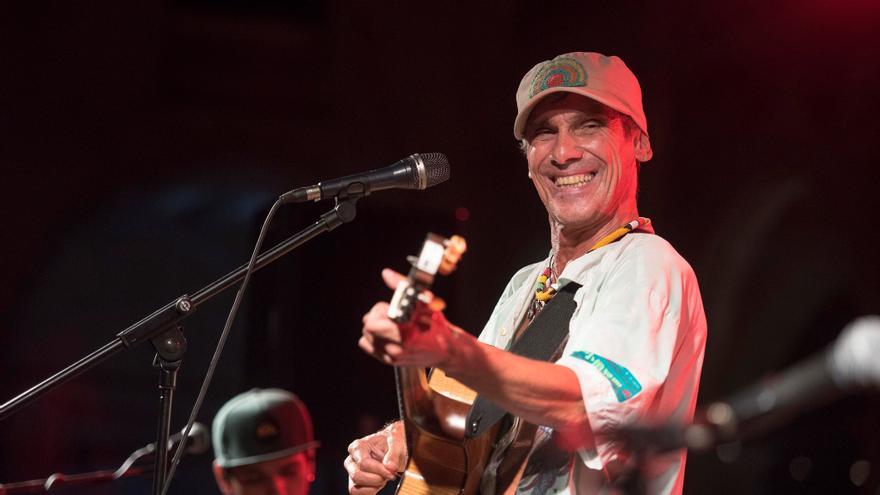 With two handfuls of sand and a leather scrotum, Latinos conquered the world in their sound dimension. The maracas, the rattle of the indigenous orchestras, would mark the rhythm of the 1940s. With this, Latin jazz would make people shake their hips to the beat of the sound of a poisonous snake.

The writer Alejo Carpentier knew it well when he appeared at Ramón Chao's house with some maracas that he gave to little Manu. It was there that he began everything for one of the most combative artists of recent times who would soon take to the streets with the poison of music running down his spine.

Hot Pans and Los Carayos will be the embryo of what came later with Mano Negra, the colorful band that mixed original music and magical realism in equal parts. Because, if there was an inspiration for Mano Negra, that was, without a doubt, Gabriel García Márquez. Driven by his literature, Manu Chao will travel with his band to the corners of the deepest Colombia. It is told by Peter Culshaw, the Indiana Jones of world music, in the biography of Manu Chao that has just been published in Spanish by Libros del Kultrum.

Mano Negra broke up in 1995. From that moment on, Manu Chao He plays the role of singer-songwriter with his guitar, touring the roads that go from Finisterre to the Urals passing through Chiapas. He sings for Los Chunguitos and for Bob Marley, he carries his voice to the most needy corners and sleeps in any way and position. He smokes weed and experiments with peyote and ayahuasca.

Manu Chao is a free spirit who never reads the restaurant menu. So that. He prefers to read his friend García Márquez, whom he met as a child in Paris. "You were a headache when you were four years old and you still are," the Colombian Nobel told him when he saw him arrive aboard the cargo ship named Melquíades in homage to the gypsy sorcerer from "One Hundred Years of Solitude"; a nautical caravan where the Mano Negra shared the stage with Philippe Decouflé's dance company and Philippe Genty's puppets.

After this adventure, Manu Chao will continue living the passages of “One Hundred Years of Solitude”. This time he will do it riding on a train that he himself starts rolling along the abandoned tracks of Colombia; a steaming machine that transports a large ice sculpture, a nod to the magical moment in which José Arcadio Buendía discovers the miracle of ice. To close the circle, the train tour ended in Aracataca, birthplace of the Nobel.

From Santa Marta to Bogotá, Manu Chao's group offered their free show: a circus of music and fire, bathed in the tongue of a mechanical dragon. Peter Culshaw tells it in his book and Ramón Chao also told it in another book, almost thirty years ago. It was titled "A train of ice and fire" and was published in the editorial that the magazine El Europeo set up with El Canto de la Crew, a group led by Alberto García-Alix and which Manu Chao approached during his stay in Madrid in the middle of the from the 90s

The photos that Alberto took of Manu on the outskirts of Madrid remain from those days. They are black and white photos where the musician looks at the camera with the poison in the eyes of the one who knows that, with two maracas, he can conquer the world. There is no other way.