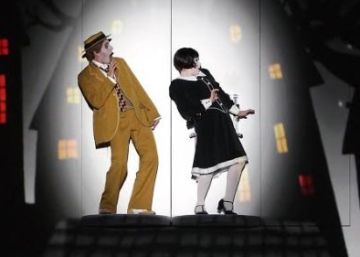 The magic Flute It is the second title in the current season that the Teatro Real retakes, with production included, from its wardrobe. The other has been L’elissir d’amore (Donizetti) in the beach vision of Damiano Michieletto. In the case of the Mozartian flute, in celebrated scenic setting of the Australian Barrie Kosky and Suzanne Andrade. You have to have a lot of confidence to come back four years later. But the bet is winning, this production can with everything, it can be seen countless times and you can even come with children (separate ticket prices), and always excited. On the other hand, ingenious scenic productions, loaded with good taste and entertaining as rarely happens in opera do not abound. So the result proves them right and people get excited, tickets are sold out and everyone leaves Real with a smile from ear to ear.

It is known the scenic plot proposed by Andrada and Kosky, a silent film production on which singers are embedded, honoring key figures of the moment, Papageno as Buster Keaton, Pamina as Louise Brooks, etc. But there is more, it is a bet as ambitious as it is foolish to capture in two dimensions the fantastic universe of this opera. And the visual references extend to the cartoon, pop or those star visions of the magic lantern, with special mention for the visual animator Paul Barritt.

It is noteworthy that all the spoken text has been reduced to the slightest expression and put on screen by way of the labels of the old silent cinema, with an accompaniment of pianoforte by Ashok Gupta, which touches fragments of a couple of Mozart’s fantasies.

To achieve success, the synchronization of singers almost embedded in the plane must be perfect. And as it is, the public is amazed. It is therefore grateful for the remarkable achievement of singing admirably and measuring every inch or gesture to the centimeter.

The musical part is much more than enough, with Bolton daring with an orchestra adjusted to time criteria and risking some mismatch that the quality of the show forgives without restrictions. The vocal cast keeps some singers from four years ago, along with novelties that reach an outstanding global coral and filling. Difficult to highlight names in work so compact and memorable. The effort of the soprano Rocío Pérez who has taken his turn to replace Albina Shagimuratova in the charismatic role of Queen of the Night is appreciated. It is forced to name the other four main roles, Andrea Mastroni as Sarastro, a bass with velvet bass; Anett Fritsch, like Pamina, solid in the vocal; Stanislas de Barbeyrac as a determined Tamino and with a good timbre; and Andreas Wolf’s Papageno with more than convincing benefits.

I can not stop reviewing a message that, perhaps, the candy of the show leave a little side. At the end of the opera, when the Queen of the night and her accomplices are defeated and the light and reason overcome, the projection also abysses and the final choir, together with the protagonist couple, already sings on the three-dimensional curtain. That is, the two-dimensionality kept the opera itself trapped and it is the final victory of this one that reaches the thickness of the theater. Great message after two and a half hours of scenic virguerías to deny that third dimension.

Portrait of the universal painter