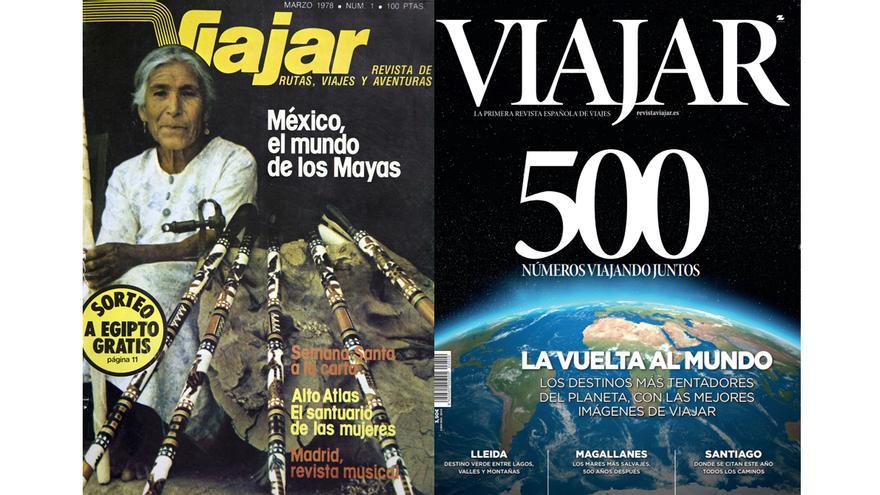 The 500th issue of the magazine 'Viajar', edited by Prensa Ibérica, the same publishing group as this newspaper, hits newsstands next Monday, May 17. The dean of travel magazines published her number 1 now 43 years ago. His story is linked to a mythical publication of the Transition: 'Cuadernos para el Diálogo'. At the end of 1977, the magazine 'Cuadernos para el Diálogo', which had played a key role in the opposition to Francoism and the impulse to the Transition, suffered in its accounts the economic erosion caused to the general information weeklies by the first newspapers free and democratic, El País, first, and Diario 16, later. In that situation, the publishing company of 'Cuadernos para el Dialogo' considered publishing what would be the first Spanish travel magazine: 'Viajar'. It was the time of bus tours in Spain and Europe, honeymoon trips to the Canary Islands and Mallorca and the first charter flights to London to go shopping. The passports issued during the Franco regime, which prohibited travel to the USSR "and its satellite countries" were still circulating. Spain was stretching and the Spanish began to travel.

The writer and journalist Luis Carandell and Javier Gómez Navarro, manager of the publishing company of 'Cuadernos para el Diálogo'. they were in charge of giving birth to the 'Travel' project. “Luis was the ideal person to direct this magazine”, wrote in 'Viajar', years later, Gómez Navarro. He had lived as a correspondent in Egypt, Russia, and Japan; He was entertaining, fun, cultured and scholarly, and was able to generate an immediate group of loyal contributors who were the lifeblood of the early years of publication.

In 1978, the same year that Spaniards were preparing to vote for the Constitution, the first issue of 'Viajar' appeared on newsstands, with an image of a Mexican indigenous on the cover, signed by photographer Catalá Roca. For the first time, the Spanish had a Spanish magazine that talked about travel and that it did so with a special passion: the passion that has infected the teams that have been succeeding in the writing of 'Viajar'.

In 1981, the FITUR fair was born, an idea promoted by the 'Viajar' staff that crystallized in a project approved by the Secretary of State for Tourism, the National Foreign Tourism Offices in Spain and the newly born Madrid Fair Institution, Ifema . That same year, 1981, the newspaper became part of Grupo Zeta.

Since its inception, 'Viajar' has distinguished itself for the quality of its texts and images. Also for the literary quality of his regular collaborators. In 1980 the magazine incorporated the monthly sections of Jesús Torbado and Manuel Leguineche. Later, Javier Reverte and Luis Pancorbo would arrive. In July 1996, journalist Mariano López, who is still in charge of the publication, assumed the direction of the magazine.

For many journalists, 'Viajar' has been their main school in the exciting journey of travel journalism; and it has always had, and has, top-notch photographers. César Lucas was its director of photography for more than two decades.

In 2005, the magazine launched its digital edition. Today the web www.revistaviajar.es It has more than one million unique users and two million followers on social networks: it is the travel magazine in Spanish with the most followers on Facebook worldwide.

In 2016, 'Viajar' inaugurated a new form of reader participation in the magazine's dreams: the 'Viajar' Expeditions. The first of them, in December 2016, was destined for South Africa and the Victoria Falls, a trip organized by Value South Africa with the extraordinary participation of Javier Reverte. The second Expedition, with B the travel Brand, went to the Serengeti and the Ngorongoro crater, in Tanzania. Organized and marketed by B the travel Brand Experience, the 'Viajar' Expeditions have continued in 2018 and 2019 and have had such wonderful destinations as Tibet, Myanmar (ancient Burma), the Amazon, Machu Picchu and Antarctica. This year, 2021, the 'Traveling' Expeditions will return, which will schedule two spectacular nature destinations for the last quarter.

Participants in one of the 'Travel' Expeditions, in Machu Picchu.

In June 2018, the magazine's 40 years were celebrated with the delivery of the 'Travel' awards to four great travelers: Sebastián Álvaro, Cristina Spínola, Javier Reverte and Pedro Duque. Sebastián Álvaro recalled that when the magazine was born in 1978, the word 'adventurer' was understood only in the second meaning offered by the dictionary: man without trade or profession. “'Viajar' –said Sebastián Álvaro- was one of the magazines that helped the country to reconcile itself with adventure in the best sense of the word: the space of time that we stole from death. Adventure is passionate life ”.

On April 18, 2019, 'Viajar' becomes part of the Prensa Ibérica group, a new house in which it has reached 500 numbers, and which will be commemorated in the Fitur 2021 edition, from May 19 to 23. From his new home 'Viajar', the first Spanish travel magazine, he continues to bet on adventures, dreams and the magic of knowing new places.