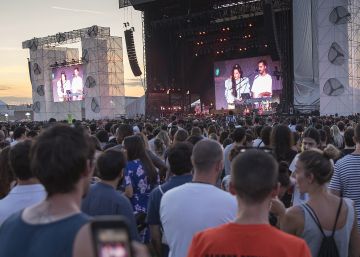 Mad Cool has already had contacts with other cities in Castilla y León and Andalucía, which have shown their interest in hosting a festival that was born in the capital in 2016 with the aim of “creating a brand in Madrid”, as announced by its organizers and authorities that year, and “consolidate a great event that would serve as a transversal axis between tourism, culture and the economy.”

However, now Mad Cool (which owes its name to the conjunction of the words Madrid and cool, which in English means cool) studies jumping to another Spanish city before “the lack of stability in the enclosure.” “The expansion of Ifema forces us to get out of there after the 2020 edition and we need a global agreement, with stability over time, to work with full guarantees and make Mad Cool the great festival of reference that Madrid had always wanted” , say sources of the organization. The alternatives offered by the Madrid City Council, according to the same sources, are “unviable” spaces, being “smaller, worse communicated and without good services”.

From the Madrid Consistory, the main public body on which the festival depends and the choice of the venue, it is emphasized that there is “a commitment to Mad Cool”, which receives a public grant of one million euros – “the highest for a promoter cultural culture ”, they stress—, but that the options are what there are. “The will of the City Council is that Mad Cool does not leave Madrid, but our public cultural policy does not only focus on major festivals,” he says. Andrea Levy, Delegate of Culture, Tourism and Sports.

For two years the macro festival has been held at the Valdebebas-Ifema site, with a capacity for 80,000 people, although in Last year’s edition was limited to 50,000 attendees per day after the 2018 capacity issues. The expansion of Ifema, which will begin in October and will add 50,000 square meters of surface for exhibitions and meetings, includes the construction of two new pavilions, a service building, a convention center and three parking areas, which will force the transfer of the Festival grounds to another place.

This would be the third change of Mad Cool’s location since birth. The first two editions were held at the Caja Mágica, in the multipurpose stadium in the San Fermín neighborhood. In 2018, it moved to the Valdebebas site, a space of 196,000 square meters that will be discontinued as of this year’s edition. The options that are being considered for 2021 would, according to Mad Cool sources, turn the contest into “another thing that has nothing to do with the current festival”.

The same sources assure that they are “out of time” to guarantee a competitive cartel by 2021. The delay in the confirmation of an appropriate venue to house the Mad Cool affects the hiring of the large headliners, which are closed with more than one year in advance and are subject to all types of clauses and guarantees. Information about the enclosure and infrastructure is one of the most basic. “What we are requesting is a continuity support for the festival. Today they do not assure us and we cannot continue with the project, investing and risking, if we do not see a support from public organizations, ”say the sources.

After many failed projects, Madrid managed to place itself on the map of the great festivals of Europe with the Mad Cool. Thanks to the private initiative and the support of the promoter Live Nation, the global giant in the concert sector, The macro festival became an alternative to the most important events in Spain such as Primavera Sound, Sónar, the Benicàssim International Festival (FIB) and Bilbao BBK Live. This year it has some of the most prominent headliners on the international scene like Taylor Swift, Billie Eilish and Kings of Leon. In previous editions, Neil Young, Pearl Jam, Dua Lipa, Foo Fighters, Depeche Mode, The Cure or Arctic Monkeys passed. British magazine New Musical Express He considers it one of the ten best contests in the world.

In addition to being the largest festival in Madrid, Mad Cool is an international reference with more than 663,000 attendees in four years, of which 200,000 come from 100 different countries, and with 1,200 accredited media. Beyond holding concerts by great foreign and national artists, Mad Cool is an economic giant, the largest in terms of turnover in live music in Madrid. With an annual budget of 20 million euros, the official figures, prepared by the consultancy Price Waterhouse Cooper, show that the event has generated an economic impact in the city of more than 174 million euros and has created 14,200 jobs in its four editions held so far. According to the festival, for every euro it receives from public administrations it generates 50 in Madrid. In addition, in its four editions it has caused a tax collection to the institutions of more than 34 million euros.

Cuba’s problems must be resolved among Cubans

Juan Diego Flórez, satisfied by the return to the activity of the lyric