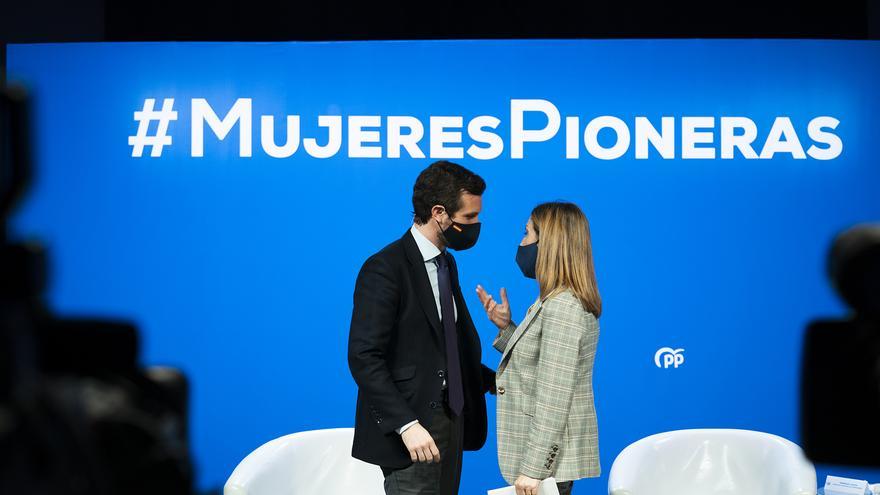 Trying to recover the electorate that fled in the last years from the PP to Vox, Pablo Casado wanted in his first months at the head of the party temporize with the discourse of the extreme right on matters such as immigration or equality and took a stand against feminism, whom he accused of “confronting” women “with the other half of the world” or to “collectivize by sex.” After a succession of electoral setbacks and urged by some party barons who were trying to pull him towards the center, he decided to rectify.

Despite having broken in Congress with the extreme right in the motion of censure presented by Santiago Abascal, Casado does not manage to take off in the polls, while Vox registered an exponential growth both in polls and in the last elections held in Catalonia where he swept to PP: Abascal’s formation tripled the popular in seats . Faced with that scenario, the leader of the popular decided to change strategy: improvised the umpteenth turn to the center in search of the more moderate electorate and, among the issues from which he wanted to clearly differentiate himself from Vox, he included feminism and, more specifically, the recognition and fight against sexist violence that systematically questions and denies extreme right.

Married now declares herself a “liberal” feminist, celebrates 8M and joins the sanitary cords of the rest of the political parties against the anti-feminist initiatives that Vox registers and defends in Parliament. But it is precisely in the Cortes where the leader of the PP is seeing the real staging of this sought-after approach to feminism difficult, due to the continuous macho attacks that deputies and senators of his party launch against the progressive government and, especially, against its ministers.

This last week two of them, the Minister of Labor, Yolanda Díaz, and the Minister of Equality, Irene Montero, suffered in parliament that machismo that survives in some popular leaders who do not make an effort to hide it in their public appearances. During the Labor Commission that took place in Congress on Monday, the PP deputy for Cantabria Diego Movellán assured during a Diaz appearance that “The women” of Unidos Podemos “only rise through the ranks if they hold on tight to a ponytail”.

Trying to criticize the situation of the workers before the policies of the PSOE Government and United We Can, Movellán launched the following reflection addressing Yolanda Díaz: “He talks a lot about equality in his party and his own leader has made it clear to us that women within You only rise through the ranks if you hold on tight to a ponytail, which is what you are like Rapunzel’s story for. Madam Minister, that the workers of this country do worse with you, we were already clear about it, the unemployed also do worse when you govern. “

When it was his turn to reply, Díaz demanded an immediate rectification: “I wanted to begin by asking the PP spokesman to rectify his words. I think they are inappropriate for this House and show a clear exercise of machismo. Mr. Movellán, of course, I ask you that he rectifies his words. ”The deputy for Cantabria then clarified:“ I have no problem in withdrawing it because all Spaniards know how their party and appointments work. ”Finally, the minister considered that“ citizens “deserve” a better opposition, they deserve a better PP. “” And I’m sure you are capable of doing it. Women do not deserve this treatment, “he settled.

A day later, on Tuesday, the target of the PP’s macho attacks was the Minister of Equality Irene Montero. During the control session of the Government in the Senate, popular senator Ana Camíns gave the minister a message for the second vice president and candidate of United We Can to the Community of Madrid, Pablo Iglesias, who is her sentimental partner: “Tell him that in Madrid we are waiting anxiously for you at the polls, you will realize that Madrid is not a Netflix series. And also tell him that every insult he dedicates to Mrs. Ayuso we are going to hang on our lapel like a medal, because we are very proud of a woman who has managed to be president of the Community on her own merits and not because she is absolutely nobody’s wife. ”

It was not the first time that Montero was a victim of those macho assertions by the popular ranks in the Upper House. In October during another session of control to the Government in the Senate, the PP senator María Adelaida Pedrosa, asked the Minister of Equality about the “gender aggravation” that a judge of the National Court cited in the rationale in which he asked the Supreme Court to investigate the second vice president, Pablo Iglesias, in the framework of the so-called ‘Dina case’. “Are you going to continue defending the vice president in the savage machismo that he is carrying out?” He asked.

“Put into practice what you defend, do not give in to a male chauvinist,” he added. Pedrosa he insisted during his speech on making personal allusions to Montero: “It is a scandal that you, as Minister of Equality, remain silent. From woman to woman, if you want to look me in the face, are you ashamed of sharing your life with a macho man or are you going to remain silent? Are you a submissive woman an alpha male? “

At that time the president of the Senate interrupted the debate to call the senator “to the question.” “Avoid making personal allusions,” he told her. Despite the warning, Pedrosa maintained the tone and repeated the questions several times, which caused mixed comments between the different groups and the intervention, again, of the president.

“The first thing, I get into bed with whoever I want,” Irene Montero replied, who concluded: “They need to call the government and the whole world macho because it is the only strategy to whitewash that they govern with the extreme right that denies sexist violence and structural inequalities. ” His arguments were reminiscent of those used a year ago by the then PP spokesperson in Congress, Cayetana Álvarez de Toledo, who described Montero as “the most humiliated woman in Spanish politics.”

To all these statements are added the constant interruptions, shouts, insults and allusions to their clothes that the ministers and deputies of the left receive in Congress by the PP and Vox benches. Attacks also occur on social media. In October, Ana Vázquez, PP deputy for Ourense, was also dispatched on Twitter against Minister Irene Montero, who had posted a news item referring to the Gürtel ruling which was accompanied by the word “corruPPtos.” “I’m talking about P … the heels !!”, the ‘popular’ parliamentarian typed.

All this contrasts with the attitude favorable to feminism that Casado’s leadership now tries to represent, clearly marking distances with the denial of sexist violence and contrary to the equality of the extreme right. On March 8, Casado vindicated the “liberal feminism” that according to him his party embodies.

“We do not feel uncomfortable with them saying that we are a party that deals with feminism if that is the fight against inequality, but that we do it with people’s freedom at the center,” the PP leader remarked then, to clarify , however, that his “concept of real equality of opportunities is that women do not confront men but neither do men confront women”.

Casado said that he has been talking about feminism for 20 years from New Generations, the youth organization of the party that he led in Madrid. He also made a request to all the leaders of his party. “Let’s not allow ourselves to be labeled by the left, so that it says that we do not defend the cause of women, that it is ridiculous to say that you do not defend the cause of half of humanity. But neither are we going to allow ourselves to be taught lessons by others who think that we have supposedly succumbed to political correctness when we have the pertinent readings done, and even the writings and speeches that define us all as political facts. ”

Without mentioning it directly, Casado was referring to Vox, the party thanks to which the PP continues to govern in Andalusia and Murcia and with which he does not rule out agreeing again in Madrid if, as the polls venture, his support is essential for Isabel Díaz Ayuso maintain the Government of the Community.

Despite this dependence on the extreme right, on February 23 the PP also joined the rest of the political forces to leave Vox alone in defense of an initiative against the Gender Violence Law. Most parties refused to respond to the extreme right during the debate in Congress, preferring to use their time to show a unanimous reaction by reading the names of the 1,081 women killed by gender-based violence since 2003, when the data began to be officially collected.

Although PP and Ciudadanos did intervene to respond to Vox and did not join the reaction of the left and nationalism, the popular also showed their opposition to the proposal of those of Abascal and participated in the applause that accompanied the reading of the names of the victims of sexist violence and to the final ovation after the vote in which it was found that the far-right party was left alone in its position. The day left unpublished images, such as that of the PP spokesperson in Congress, Cuca Gamarra, applauding the deputies of EH Bildu or the CUP when they read the names of the victims.