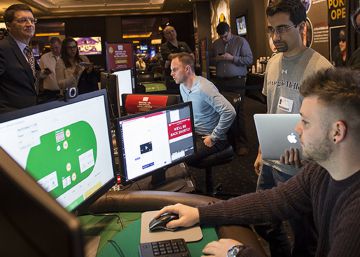 Artificial intelligence and its uses are at the center of the debate of the scientific community. Many voices of the sector have risen to warn of the dangers of its application in the battlefield. That there are scientists, engineers and inventors developing technologies that serve to kill evokes the Pandora's box that was uncovered in the Manhattan Project, when the best scientists of their generation gave birth to the atomic bomb. That episode, the use of science to kill on an unimaginable scale, was a monumental trauma among the physicists of the time. Some specialists in artificial intelligence do not want the same thing to happen after creating autonomous killing machines and launch initiatives to prevent it.

The scientist's company has two contracts of 10 million in total with the Pentagon. His university, the Carnegie Mellon, a project of 72 million

In full debate, Magazine Science today publishes an artificial intelligence experiment applied to poker. But the most interesting part is in the last lines of the article, in the section of acknowledgments. The work, which unveils a new program capable of defeating five poker champions at once, has the support of the US Army Bureau of Investigation. And also partially funded by Facebook, the social network with more than 2 billion users. Why do they want a machine that wins at poker?

Few human activities summarize so well the difficulty of managing the lack of information such as poker (with the permission of the mus, of course). Without knowing the cards of the rivals, the player must make decisions based on his own hand and on the scant information that others give him, deliberately or not. Not in vain, put poker face It is the best metaphor to express that ability to handle the secret without giving a clue to the rest of those involved.

This scenario, called imperfect information, represents an immense challenge for a machine: when it plays chess or the ladies against a human knows what is on the board, it does not decide blindly. In 2017, the Libratus machine has overcome this challenge, but in the simplest version: playing one against one in front of a human. The zero-sum games, in which the gain of one is the loss of the other, are reasonably simple to pose for a machine when it competes against a single rival. But if we put five humans on the table, all confirmed poker champions, achieving victory is much more complex.

Sandholm, which developed an algorithm to organize transplants in the US, created a company to commercialize its achievements in the military field

That is the challenge that the team of researchers that created Libratus, which belongs to the Carnegie Mellon University and which collaborates with the artificial intelligence division of Facebook. And they have achieved it, as they publish in the magazine Science: "In this article we describe Pluribus, an artificial intelligence capable of defeating elite human professionals in poker Texas Hold'em no limit for six players, the most played poker format in the world. " Pluribus Learn to win from scratch, playing against five versions of itself, without any indication or knowledge of human games. And it develops its own winning strategies, regardless of the knowledge accumulated by humans.

"The ability to beat five other players in such a complicated game opens up new opportunities to use artificial intelligence to solve a wide variety of real-world problems," says the lead author of this achievement. Tuomas Sandholm, that in 2017 he defeated poker professionals in games of two with his program Libratus. Sandholm, which has spent almost two decades dedicated to getting machines to win poker, has developed something with important applications such as deciding how to organize organ donation and transplant in the US.

After the success of Libratus, at the end of 2017, Sandholm and his pupil Noam Brown the awards and awards rained down. A machine capable of improving humans by managing scenarios in which information is missing is an achievement. At that time, Sandholm created the company Strategy Robot, to market government and security applications to the technological developments of his laboratory: military strategy and tactics, war games, intelligence, diplomacy, cybersecurity, etc. And with its company Strategic Machine commercializes civil applications: negotiation management, banking investments, political campaigns, electrical market, etc.

In poker, you face a scenario of imperfect information: when you play chess or check against a human you know what's on the board

Subsequently, Strategy Robot signed a contract with the Pentagon, as he advanced Wired, worth almost nine million euros, through the Innovation Unit for Defense, created by the Pentagon to work with Silicon Valley. It also has another contract of almost one million in force, through DARPA (Defense Advanced Research Projects Agency), to apply these imperfect information games to military decision making. In the development of Pluribus, the new machine that Sandholm and Brown present in the magazine Science, has collaborated the Office of Investigations of the Army, whose purpose is to finance research in the academic environment.

For this research, they have also counted on the support of Facebook. Brown is doing his university doctorate in the artificial intelligence division of the social network. The company of Mark Zuckerberg paid 50,000 euros to 15 professional poker champions, who were divided according to their merits, so that they played 10,000 hands for twelve days against the machine. It has also received funding from the National Science Foundation of the United States.

In a press release, the university clarifies that Pluribus it is based on the technology developed in Sandholm's laboratory. "It also includes a specific poker code, written as a collaboration between Carnegie Mellon and Facebook for this study, which will not be used in defense applications." He adds: "For any other type of use, the parties have agreed that they can use the code as they wish." This machine will not have military applications, they say, but Sandholm's company develops the achievements of its laboratory for the Pentagon, in this same field of knowledge.

Facebook paid 50,000 euros to fifteen professional poker champions and will be able to use the program "as they wish"

In March, the US Army committed 72 million dollars (64 million euros) for an artificial intelligence project that serves to "investigate and discover capabilities that significantly improve the effectiveness of the mission throughout the Army by increasing soldiers, optimizing operations, improving preparedness and reducing casualties." The consortium is led by Carnegie Mellon.

"I do not know what specific uses may interest Facebook and the Army," admits the expert in artificial intelligence Nuria Oliver, "but I understand what it is to apply this development to decision making and the prediction of human behavior". Oliver, a doctor in this field from MIT and a member of the Royal Academy of Engineering, points out that this technology can generate ethical problems in the field of human autonomy, since being able to predict behaviors can also induce actions, "what it would be a potential violation of autonomy. " In addition, it raises doubts from the point of view of the transparency of its use and in the objective of minimizing the negative impact: "not being maleficent".

A month and a half ago, It was also published in the magazine Science another achievement of artificial intelligence against human experts. In that case, it was in a video game to shoot your enemy, the Quake III Arena, that combines strategy, action and lack of information in some moments in which it does not know what the rival does. That achievement was signed by DeepMind, the Google company dedicated to artificial intelligence. But DeepMind has committed to avoid the use of artificial intelligence to develop autonomous weapons, like numerous academics and other companies in this field. Sandholm believes that concerns over the military use of these technologies are exaggerated, as they will keep the US safe. "I think artificial intelligence is going to make the world a much safer place," the scientist said. Wired in January. Shortly before, Google had to cancel its participation in the Maven project, a collaboration with the Pentagon, for a revolt of their own employees, who refused to improve the vision of Army drones, which would facilitate their deadly role. Again, science and technology before his demons.

One of the keys to this public achievement Science was to get Pluribus to enormously simplify the immeasurable amount of information and possible decisions that are launched in such a complex game. The success of this artificial intelligence is just the opposite of that DeepBlue that defeated Garry Kasparov. Instead of having everything in mind when deciding the move, it is about simplifying the variables to intuitively focus on the winning moves.

For example, Pluribus does not try to anticipate what will happen until the end of the game, because it incorporates a search algorithm that deliberately limits its look to the future. In addition, the researchers discovered that, of all the options that rival players have in mind, the machine was enough to take into account only five to win. The capacity for abstraction of Pluribus manifests itself in two more aspects: the amounts wagered and the different plays. For example, the machine does not care if the bet is 200 or 201, and your bets are focused on a few limited options.

In the same way, to avoid having to study each of the infinite combinations of letters separately, Pluribus groups them together: a staircase up to ten and a staircase up to nine are, for the machine, strategically the same. "Informational abstraction drastically reduces the complexity of the game, but it can eliminate subtle differences that are important for superhuman performance." Therefore, during the actual game against humans, Pluribus only uses it to reason about situations in future betting rounds, never in the current betting round, "the study details. This machine, for the moment, focuses on its own strategies and does not seek to exploit trends in its opponents, the study says. Combined, these advances made it possible to run Pluribus using very little processing and memory capacity, the equivalent of less than $ 150 in computing resources in the cloud, according to Facebook.

Libratus, the previous version of the program, learned to bluff alone. One of the most interesting aspects of Pluribus is its ability to put poker face. He does not have a bodily expression that can reveal his play, but professionals do learn to recognize patterns in the game of others: how they bet when they have good cards, how they react when challenged, etc. "His greatest strength is his ability to use mixed strategies," said Darren Elías, a professional player who holds the record of titles won in the World Poker Tour. "That's just what humans are trying to do, it's a matter of execution for humans: doing this in a perfectly random way and doing it consistently – most people just can not," the player says. Pluribus calculates how he would act with each possible hand and then decides a balanced strategy with all those possibilities: an algorithmic bluff to disconcert his rivals.