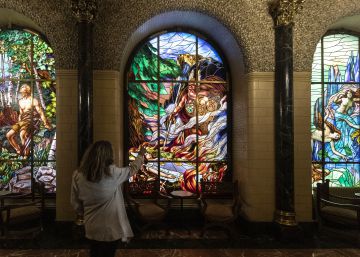 Between gray brown with the marquetry worn by the passage of time and obvious cracks in its walls. This is how the facade of the Barcelona Lyceum after the fire that destroyed his soul in 1994. The flames did not reach his face, which already accused the passage of time. It had not been restored since 1918, when, precisely, the intervention that was done covered much of its original appearance. Now, to celebrate the 20th anniversary of the reopening del Liceo after that terrible fire, the theater shows a new face, rejuvenated. A rehabilitation that has included a hidden treasure for more than 80 years, the stained glass windows that illustrate one of Wagner's great works in the lobby of the Circle of the Lyceum and that can now be seen - although inverted - from the street of Sant Pau. Yes inside the theater today the technology of a Turandot with virtual reality glasses, its exterior appearance will be sober and classic.

"The best restoration is the one you barely notice," explained architect Xavier Fabré this afternoon, who has carried out the intervention. The Lyceum had pending the restoration of the facade for years and had been set aside to recover better financial health. Finally, this spring began the works that have involved an investment of about 800,000 euros, borne in part by the Consortium of the administrations that manage it and for the proceeds from the theater that has organized different social events -especially dinner- to fundraising. The theater seems to have already completely ruled out the intervention that the artist Frederic Amat devised, according to sources from the Lyceum, and that neither had the placet of the consistory.

The one that officially opens tonight is the fourth facade of the theater: "It was inaugurated with some precipitation in 1847 and its facade was a terracotta surface. The fire of 1861 damaged it and did not intervene in it until 1874 when the architect of the theater, Oriol Mestres, remade it with stucco imitating the stone of Montjuïc ", explained Fabré, who has also intervened in the recovery of other heritage works, such as some of the pavilions of the historic site of Sant Pau. The Lyceum was made on the impulse of the Catalan bourgeoisie that also did not have large sums of money to invest in a large facade of a theater that, on the other hand, was still a building in the middle of the already motley Rambla and lacking a Great avenue or plaza that would give special visibility.

In 1918 it was reformed again with a rather mediocre result, in Fabré's opinion: "The stucco lines were modified, also the columns and painted with little cream and pastel colors. Now, what has been done has been to ring that last reform to recover the appearance it looked in 1874. We have returned the original stucco imitating the stone of Montjuïc and also the color, "he added. The marquetry of windows and balconies has also been removed and has been uniformed in a green tone. The great novelty of the intervention is lighting. According to what occasions and celebrations, the facade of the Liceo will have different colors due to the effect of the led lights.

The rehabilitation has also included the theater side of Sant Pau street that lacked elements that defined its architecture. Although the great novelty are the stained glass windows of the Círculo del Liceo that overlook that street and that since 1930 were boarded up by wooden gates. They could only be seen by the members of the Circle who chose the Wagnerian work, so in keeping with the spirit and operatic tastes of the time in Barcelona, ​​of the Ring of the Nibelungo to capture them in four large stained glass windows that were made by Oleguer Junyent in 1903 and 1904. The four scenes, the theft of the gold of the Ring, the punishment of the heroine Brunilda, the birth of Siegfried and his death, have regained life on the outside, because they were not seen, but also on the inside: "Between the effect of the heating of coal of the last century and the smoke of the cigarettes of the partners of the Circle, Brunilda seemed to have a beard, "Fabré has ironized to summarize that the crystals were very damaged and, above all, dirty.