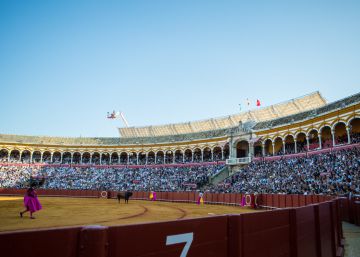 The bullfighting festival returns to do the paseo; The doors of Las Ventas have been opened, and with them those of Castellón, Alicante and Badajoz, and fairs are announced in Burgos, Soria, Santander, Segovia, Zamora …

When the darkness of the pandemic slowly clears up, vaccines reduce the role of the virus and masks take the first step to become museum pieces, the bullfighting party gets on the festive bandwagon, outlines a smile and faces the present with cheerful optimism. The capacity of the squares is expanded, sanitary measures are made more flexible, there is talk of bulls again and posters sprout up everywhere in a terrain that seemed deserted.

The show has received a medical discharge, has overcome a long convalescence and, with a revived countenance, everything returns to the way it was before.

Well … almost like before. That is the image of euphoria, after a very hard year for those who live from bullfighting, but it is not clear that it responds to the harsh reality.

The facts are stubborn; and this was confirmed a few days ago in this newspaper Simón Casas, president of ANOET, the association of the great bullring businessmen: the first fairs have been an economic ruin. “I believe that society remains impacted psychologically and economically, and this problem will not be solved in two days,” he added.

Are spectators expressing a fatigue that has become visible with the pandemic?

But there is more. The bulls intend to return as if nothing had happened, in a vain attempt to erase the past, and move on as always, with the inertia of tradition and the all-encompassing power of the bullfighters.

And it does not seem that this is possible. It is known that the bullfighting festival already suffered from serious internal pathologies before the arrival of the virus. Then the pandemic aggravated them and has left its aftermath, and all require a calm analysis and the remedy of urgent measures in a last minute attempt to recover all the capital lost in a year of total closure.

The first of them is an unprecedented economic crisis, which affects the pockets of a public that today, perhaps, does not have among its priorities the return to a bullring.

The second, why not, the distrust and fear that the virus has spread to all corners, and that slows down the spirit when going to a social gathering, especially among adult citizens, who are the majority of those who attend. to a bullfighting celebration.

And a third: what does the bullfighting festival offer in 2021 that awakens the need to recover customs from the past? What has changed? What are the novelties of the show?

Has any bullfighting sector seriously wondered what happened at the last San Isidro Fair held in Vistalegre? Why didn’t some posters full of figures arouse the slightest interest at the box office? Was it just a high price issue?

Why has the public failed in Granada? Why the bullfight of Adolfo Martín that opened last Thursday the Castellón fair It did not gather more than about 2,000 people of the 4,000 that allowed the capacity, nor was the Badajoz square filled the same afternoon, in which Antonio Ferrera cut off two ears and a tail?

Something serious is happening despite the fact that the sector and the media prefer to ignore this detail.

There is some message that the public emits that must be deciphered to find urgent solutions.

Is the growing social detachment towards the bullfighting party greater than you think? Are spectators expressing a fatigue that has become visible with the pandemic? Has the habit of going to the bulls been lost?

The fairs smell of millionaire losses; if there is no solution, the party does not hold

Could it be that the economic crisis and pandemic prevention are joined by an outdated model based, among other issues, on the mimetic repetition of bulls and bullfighters that do not bring the slightest surprise to the show?

Don’t bullfighters see the bored faces of the spectators who come to the festivities? But if it seems that they are at a funeral …

Does bullfighting have a plan to revitalize the sector, make it known, attract customers and retain them?

Has anyone thought of speeding up the show so that it doesn’t last forever? Has no figure ever realized that most of the afternoons the crutch tasks cannot be as long as they are insufferable?

Any sporting or artistic manifestation is subject to constant changes to attract the attention of its potential audience. Why doesn’t bullfighting work like any modern culture industry?

Why don’t so many veteran bullfighters who have already said it all retired at once and dress up in lights to pick up the death throes of an art that they are selfishly sacrificing themselves?

When will someone raise their voice and stop the unhealthy proliferation of cattle irons to the liking of the figures?

Victorino Martín Sr. said that “the show without emotion is useless”, and that “the wild animal must show fierceness, chaste and aggressiveness”, precisely what does not happen today in the vast majority of celebrations.

Whoever thinks that the end of the bullfighting pandemic is near is wrong. The end of the long desert that began with the arrival of the virus is not seen despite the euphoria that the announcement of new celebrations can bring.

The public sends a message to the bullfighters, and there is a danger that they, once again, hide their heads under the wing and prefer the storm to pass rather than take the problem by the horns and face it with courage.

The first fairs have been an economic ruin; those that are celebrated these days smell of millionaire losses. If there is no prompt solution, the party does not hold; And it won’t be because of the virus.