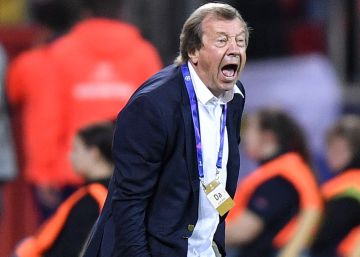 Year 1990. In a central Moscow hotel a twenty-year-old American breaker and adventurer who answers the name Dale Mudholland waits impatiently and distressed for a call that can make him the first western footballer to play in a Soviet Union club. During the wait, attracted by his figure, managers of some of the most important clubs invite him to sign for the Spartak in Moscow, the Zenit of Leningrad, now of St. Petersburg, or the Dynamo of Kiev. But Mudholland has chosen: the Moscow Lokomotiv, the rival that Atlético de Madrid faces on Tuesday (21.00, Movistar Champions League). The senior official of Moscow is also seen by the hotel attracted by the curiosity and intrigue that wakes up that American boy of voluminous hairstyle to Patrick Swayze.

The openness that Mijhail Gorbachev has brought to the country, driven through Glasnost and Perestroika, is about to culminate Mudholland's dream, driven by himself after being inspired by Arnold Hammer, American finance magnate and pioneer in establishing Commercial relations with Moscow. After a long bureaucratic wait of more than a year, the Soviet and US sports authorities reach an exchange agreement. An American footballer in the iron curtain metropolis and a Soviet, Alex Golovnyax, headed to Florida to play at the Orlando Lions. The expected telephone connection occurs. Yuri Semin, at that time in his first stage as coach of the rail guild club, is willing to give him a test that will end up giving him a two-year contract.

Almost thirty years later, Semin (72 years old) completes his fourth stage on the bench of the Lokomotiv. The fan says that the coach's face should appear next to the red star that looks on the front of the steam locomotive at the gates of the stadium, a symbol of the club. Semin has been, in addition to coach, player and president of Lokomotiv. In the mid-90s he saved the bankruptcy entity after acquiring shares that he still retains. As a leader, he began an expansion policy aimed at attracting fans through a direct relationship with the club based on the concept of family. As a coach, the only three leagues won (2002, 2004 and 2018) since the disappearance of the USSR that showcased in the showcases of the stadium were under his technical direction. The first conquest, that of 2002, meant ending a long hegemony of the CSKA. The title was propagated as the triumph of a humble and familiar club against the economic and influential power of the great Muscovites, the CSKA and the Spartak.

“We are like Atlético, we believe in ourselves and we go with everything as far as we can. The victory in Leverkusen is an example of this, we bet a lot for ourselves, even if the rest does not do it, ”says Iván López, a physiotherapist at Lokomotiv, recruited from the rojiblanco club itself for more than three seasons. "Semin is a key and very important character for Lokomotiv," says López.

“The most dangerous of Atlético is Simeone. He leads the team with great passion, just like our coach, ”says the Croatian central Corluka. “We also resemble Atlético in that we are a backlash team that is not very interested in possession. I think we are a better team than two years ago when they eliminated us from the Europa League. We are more together and the incorporations of the Howedes plant and the media Krychowiak and João Mario have strengthened us, ”warns López, who warns that the duel comes at the ideal time:“ We are very filmed, this is the time when Russian teams can give more war in European competitions. ”

Semin himself, despite the casualties of the twins Miranchuk and Anton, also issued a warning. "We are very excited, we have made two fantastic last matches," said the coach of the current leader of the Russian league. "They are fine, and they not only hurt the backlash, but also the ball, like Atlético," says Paulino Granero, physical trainer of the CSKA and the Russian national team. “They have a good goalkeeper, Guilherme, who has replaced Akinfeev in the national team. The midfielder Barinov is a 22-year-old boy who gives them balance and is international. Krychowiak is giving them goals and Smolov, also an international, is a solvent striker, ”concludes Barn about a team that could be called Atlético de Moscow.