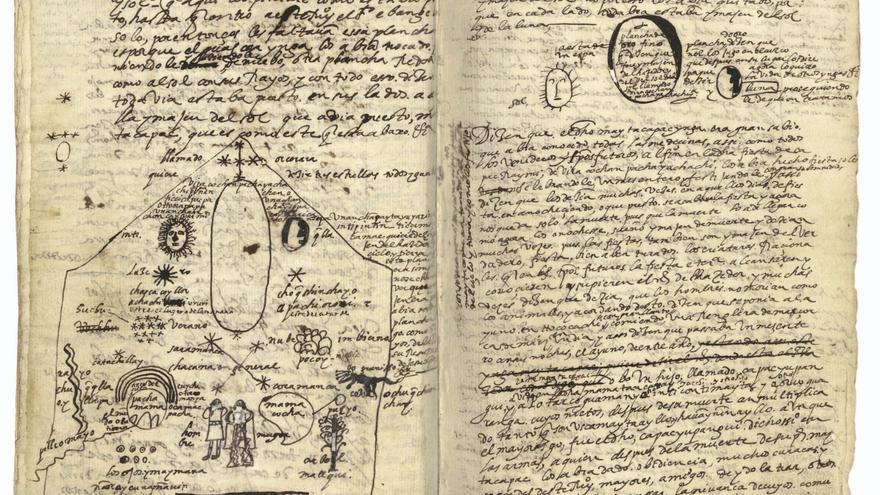 “Peru was the political and administrative entity of South America, and it also became a center of the literate culture of the subcontinent,” explained the curator of the exhibition, Alonso Ruiz Rosas, during the opening of the exhibition at the Instituto Cervantes , where it will remain until December 5.

The sample includes more than one hundred volumes and original manuscripts that claim the importance of literate culture during the almost three centuries of the Viceroyalty of Peru. This institution was created by Carlos V in 1542 as a political and administrative entity, and it also came to understand the current republics of Bolivia, Argentina, Ecuador, Chile, Paraguay, Uruguay, Panama and Colombia.

“This exhibition could not be more timely to resume the shared effort between both cultures,” said Claudio de la Puente, ambassador of Peru in Spain on the exhibition, emphasizing that “the greatness of Peru is nourished by its ancestral roots and also of its link with Spanish culture ”.

Organized by Cervantes, the Inca Garcilaso Cultural Center (Peru) and the National Library, the exhibition will be presented in Lima in 2022 within the framework of the IX International Congress of the Spanish Language, as part of a series of activities that according to the ambassador will be will last until 2024.

In a journey through the Peruvian bibliographic production during almost the three centuries of the Viceroyalty, the exhibition shows the importance of Peru as the heart of the literate culture. In a chronological and thematic trajectory, the exhibition covers from the different pre-Hispanic cultures to the emancipation of these countries from the Spanish empire.

The creation of the first American University in Lima, (Universidad de San Marcos) in 1551 or the first printing press in South America, also in the capital and with “the printing monopoly until 1700”, according to the commissioner, are only some of the evidence “of the exceptional bibliographic heritage that this sample offers”.

“This exhibition wants to show how the literate culture is one of the fundamental bases that allows the independence of the countries of South America”, has highlighted the also curator of the exhibition, Marta Ortiz, about the exhibition, which she defines as “a dialogue between pre-Hispanic and Spanish culture ”.

“The Incas and the Pre-Hispanic World” begins a journey that portrays from the meeting between the leader Athahualpa and Pizarro to the different Inca genealogies, and which leads to chronicles by different authors who recorded the arrival of the Spanish empire in the Americas, whose Prints date from 1534 and include the sections “Conquest and follow-up of the viceroyalty” and “Chroniclers and soldiers”.

Texts of confessional catechisms for priests are grouped together in the section “Evangelization, university and printing”, of which the curator highlights the trilingual nature of these texts: “the curious thing about the first printed in Lima is that they are in Quechua, Aymara and Spanish , attending to the end that the priests could evangelize ”.

The “most aesthetic” part of the exhibition can be appreciated thanks to the illustrations that accompany the texts of the sections “The letters assumed” and “The beautiful letters”, which show how “Western alphabetic writing is assumed by mestizo and indigenous people to express their own identity ”, and also literary texts and poems.

Clarinda and Amarilis, two central authors in the Viceroyalty make up an essential part of “The beautiful letters”, while the Huarochiri Manuscript becomes a fundamental piece of “the letters assumed”, in addition to the texts of Garcilaso de la Vega, belonging to to the first generation of mestizos in Peru.

The sections “Holiness”, “Indian Law”, “Philosophy and Sciences” and also “Enlightenment”, “Bourbon reforms and emancipation”, “Resurrected unpublished” and “From the end of the Viceroyalty to the Republic of Peru” make up the legal evolution of the Peru, which according to the commissioner leads to “the thinking that indigenous elites make up from the literate culture to achieve independence from the Hispanic empire.”

“The history of miscegenation had a cultural heritage that defines the way of being of Peru and also of the Spanish”, has highlighted the director of Cervantes, Luis García Montero, who has pointed out the importance of “recognizing the raw moments and also the possibilities of culture and future that have been opening up over the centuries ”.

For the director of the National Library, Ana Santos, the exhibition highlights “the beautiful culture of miscegenation between two peoples”, in addition to claiming the importance of “the permanence of the written word as the basis of a history and a common heritage” . EFE