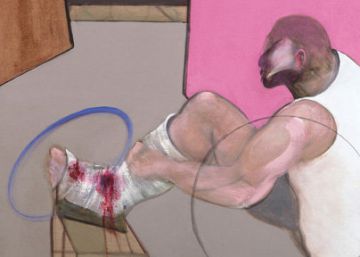 Present in the collections of the largest museums in the world and protagonist of countless retrospectives since his death in 1992, the work of Francis Bacon It seems to have been examined from all possible angles. The Pompidou Center now opposes that place common through a new exhibition that reads its production from an unexpected point of view: the powerful influence of literature on the conception of works. “Great poets are formidable triggers of images. His words are indispensable to me, they stimulate me and open the doors of the imaginary to me ”, says a Bacon phrase collected in the sample.

The idea of ​​the exhibition, conceived by the curator Didier Ottinger, who was already in charge of the recent monographs on David Hockney and René Magritte in the Parisian museum, consists in discovering a painter other than the known, more cerebral and literate, in whose work Not everything was entangled and biographical tear. Not that of the trembling flesh of its deformed models and the decomposed faces of Velazquian potatoes, but that of scholarly references hidden in abstruse paragraphs of the works of Esquilo, Nietzsche, T. S. Eliot, Joseph Conrad, Georges Bataille and Michel Leiris. Bacon translated those phrases into atmospheres and pictorial motifs, a common thread of the exhibition Bacon with all its lyrics, which can be seen in the Pompidou until next January 20th.

If literature was one of the main sources of inspiration in his work, Bacon abhorred the idea of ​​narration, which he considered antithetical to his discipline, preferring the poetic image or philosophical notion to the crude idea of ​​the story. “I want to avoid at all costs that, when I see my paintings, it is believed that I wanted to tell a story. For me, narration is a way of killing painting, a confession of helplessness, ”he said on another occasion. In his personal library, which today is kept at Trinity College in his native Dublin, there are more than 1,300 references, according to an inventory made in his London workshop in the late nineties. Many of them learned them by heart. They became the magma from which his work arose.

The scenery of the sample is unusual. The visitor goes inside six dark cubicles, in which the voice of well-known French actors is heard, such as Mathieu Amalric or Jean-Marc Barr, who recite fragments of six of the books that inspired Bacon. To the side, a showcase guards the volume from which those lines arise, extracted from the gigantic library of the artist. After that dramatized reading, you can inspect the trail of those literary images in a selection of pictures hung around.

The exhibition dispenses with cartels and other crutches, so the search for these correspondences is arduous and confusing. For example, the triptych dedicated to George Dyer, the suicide lover of Bacon, hides a very discreet reference to a lock that appears cited in a poem by Eliot, whose fragmented language also inspired paintings conceived as if they were collages. In other cases, the resemblance is more evident. Leiris' texts on bullfighting find a reflection in his Study of a bull (1991), painted a few months before passing away. Another permanent anchoring point is the Nietzschian tension between the Apollonian beauty and the Dionysian excess, which will then resume Bataille's prose presenting a conflict between vital energy and overwhelming destruction. Those opposing forces expand throughout the length and breadth of 60 paintings where unpublished shades of yellow, orange and pink abound.

The sample serves to revalue the late production of Bacon, which for decades has been considered less innovative and interesting. It is dedicated to the last two decades of its production and starts symbolically in 1971, when Dyer dies in a hotel room in Paris only two days before the inauguration of the grand exhibition at the Grand Palais, which will be his definitive consecration. According to Ottinger, that double event marks the beginning of a new stage "in the work and worldview" of Bacon. “It is the first time he faces the whole of his production. It is a capital moment in which he reflects on what he has achieved and what he will do from that moment, ”says Ottinger. In the photos of the time, Bacon poses erect and proud: he is the second living painter who exhibits in the place, after Picasso. Although there is a shadow of pain in his gaze among such glory.