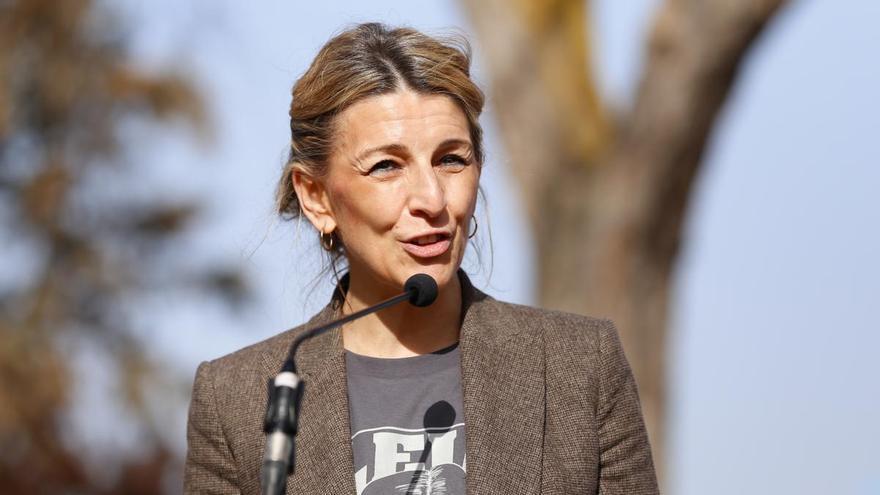 The First Vice President of the Government and Minister of Labor, Yolanda Díaz, plans to start a process of "listening" to civil society next spring. The objective is to outline a "country project" that can bring together the greatest possible number of sensitivities for its subsequent transformation into a political initiative with government options. Díaz is still reluctant to confirm that she is going to aspire to lead this new platform and, for the moment, she combines her work in the Executive with the preparation of a calendar of public events and meetings that she intends to extend for several months, throughout this year.

Without a specific date for the start of this contact with different social agents, the vice-president's entourage has told elDiario.es that this "listening" process will include "open" events, accessible to all citizens, which They will consist of meetings with representatives of different labor sectors, professional associations, associations or unions. It is a question, sources close to Díaz insist, of collecting her demands and concerns, her priorities and interests, to subsequently turn them into a political program that can materialize from the institutions.

Although these same sources insist that the "priority agenda" of the vice president is her work in the Government, they also recognize that in the coming months her idea is to "listen more than speak" in the different thematic or sectoral events that may be shaping that idea of ​​a country that can unify all the sensibilities that are located to the left of the PSOE, but that also broadens the bases of that electorate with greater transversality that can achieve broader social support. Díaz plans to travel throughout the country for her conception of a "decentralized" and "diverse" State with the recognition of the different territorial, cultural and linguistic realities.

The idea is that this "listening" process that her team always said would start before the summer but that last Tuesday the vice president herself, in an interview on TVE, he limited to next spring, be "open" and in which "many people" can participate. Díaz wants the confederal parties –Unidas Podemos, En Comú Podem or Galicia En Común– to also participate in this initiative, although from his team they emphasize that the leading role will fall more on civil society than on those formations or on the role they may have. the Minister of Labor herself or in her hypothetical future leadership. In the vice president's team they don't even want to hear about issues that have to do with electoral confluences, for example.

In recent weeks, the vice president's environment points out, "the darkest part of politics" has been seen. They thus refer to the scenario marked by the tension that, in recent weeks, has materialized in the opening of the PP channel. Or the panorama that was glimpsed at the beginning of the month in the vote on the labor reform, one of the projects for which the Minister of Labor has worked the most in recent years, which was approved by a single vote, thanks to the error of one of the popular deputies, Alberto Casero, and without the support of the usual partners of the Government.

Faced with all of this, Díaz's intention with this listening process that he will launch in the spring is "to make politics something useful", that it be centered "on things to eat" and that it move away from "noise" and "politicking" that, according to his environment, is deepening the discredit of politicians and a mistaken perception of public management by citizens.

The latest electoral processes, point out from the vice president's team, have shown that voters prefer politicians to talk about "content" and "tangible" measures. An example could be what happened in Castilla y León, where the candidacies of the so-called Empty Spain registered an unprecedented growth of support against the traditional parties.

The environment of the Minister of Labor avoids specifying what this "country project" will later materialize in, whether it will be a new political party, an alliance of existing ones or specific candidacies in the different territories with a common thread throughout the State. The sources consulted point out that, once this "listening" to social or union groups is over, "the most appropriate instruments" will be sought to transform the concerns of all of them into a concrete proposal.

"In the spring I launch myself into a listening project," Diaz herself assured on Tuesday, on TVE. "I am going to tour my country with a single vocation, which is to reduce the democratic gap between citizenship and politics," she added. She also wanted to make it clear that she is not a "candidate" to lead any political project, although she stressed that "logically that work" that she will carry out in the different acts that are convened from next spring, "of legitimization and generation of projects, measures and a lot of hope in the citizenry, must culminate in an electoral process".

Apart from this political project that is about to be finalized in the coming months, Díaz continues to lead the members of United We Can in the Council of Ministers, and coordinates the parliamentary group, but with respect to Podemos, the formation headed by the Minister of Rights Social, Ione Belarra, operates as a person outside the organization. For the moment, the germ of this new platform was the act of political women which starred the vice-president in November in Valencia together with Mónica Oltra, Mónica García, Ada Colau and Fátima Hamed. "It's the beginning of something wonderful," she sentenced then.