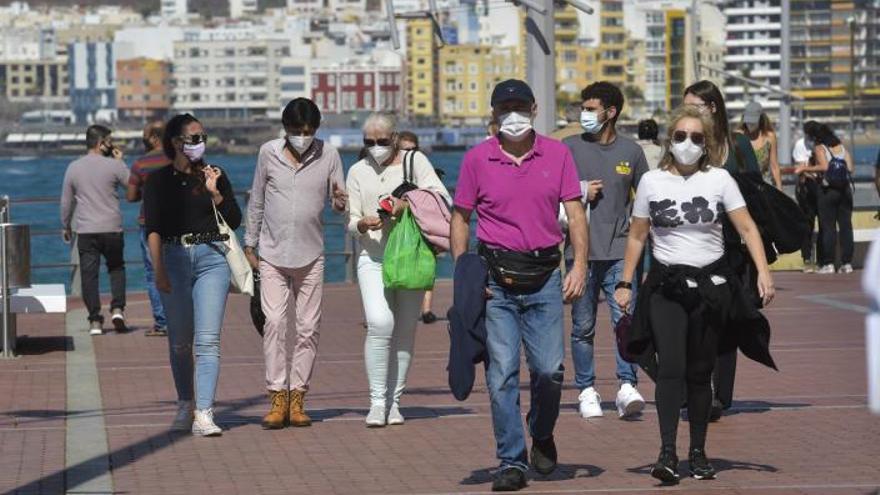 Gran Canaria, Tenerife and Fuerteventura go to level 3 alert for covid after closing a week in which 1,345 SARS-CoV-2 infections have been registered in the region. This is 67 more than seven days ago, when a total of 1,278 were recorded, which in turn translates into an increase of 5.2%. Since the beginning of the pandemic, 44,843 cases of coronavirus have been detected in the Archipelago, 218 of them notified yesterday by the Ministry of Health.

Since last midnight, the degree of restrictions in the territory of Gran Canaria, Tenerife and Majorero has risen, as decided by the regional Executive in the last Governing Council given the epidemiological evolution of the virus in the Canary Islands. Thus, while La Palma, La Gomera and El Hierro are still at level 1; Y Lanzarote and La Graciosa remain in the 2; the other three islands have gone from the reinforced level 2 they were in until yesterday, to a level 3 that, however, has some new features compared to last time.

Among the measures that the Government agreed to modify is the opening of gyms to 33% of their capacity, always maintaining a safety distance of two meters and with the mandatory use of a mask at all times. Also, at all levels, Restaurants are allowed to extend their opening hours until midnight only for the delivery of food at home, although the pick-up service at the premises is exempt from this option.

On the other hand, Level 3 maintains a curfew between 10 p.m. and 6 a.m.; as well as The entry and exit of people from Gran Canaria, Tenerife and Fuerteventura is restricted, except for justified cause that occurs for any of the reasons contemplated in article 6 of Royal Decree 926/2020 of October 25.

It also establishes the cclosing the interiors of the restaurants that can only be served abroad, where the capacity cannot exceed 50% and diners cannot be more than four per table. Likewise, the activity must cease before 10 pm –except for home delivery–. On the terraces or other outdoor spaces dependent on the establishment, those activities that encourage not maintaining interpersonal safety distance or not wearing masks, such as dances or karaoke, are prohibited, among others.

In addition, at level 3 alert for covid, the permanence of people in spaces for public and private use, whether closed or outdoors, is limited to four, except cohabitants. And in places of worship, as well as funerals and wakes, you cannot exceed 33% of the stipulated capacity of people who can attend; nor can mass events be held subject to prior authorization.

The new scenario begins just a few days before the start of Holy Week, when extraordinary measures will come into force throughout the Archipelago –between March 26 and April 9–. Until yesterday when Health reported three other deaths from the virus, the region had a total of 4,412 people infected with Covid-19. Most of them, specifically 4,052, receive medical follow-up in their homes. However, 360 have required hospital admission: 72 in intensive care units and 288 on the floor. In contrast, 393,784 citizens have overcome the disease so far as a health crisis.

By islands, Tenerife It added 87 more coronavirus cases last day, so its accumulated numbers become 18,899 and its assets 2,315. It is the territory with the highest number of people affected by SARS-CoV-2, concentrating 52.5% of those in the entire autonomous community. In Gran canaria 96 more positive diagnoses were recorded yesterday than on Saturday, so that its overall count stands at 18,463. On the island, 1,711 people are infected, which is 38.7% of those in the region.

LanzaroteFor its part, it has accumulated 4,566 cases since the beginning of the pandemic, after registering seven more in the last 24 hours. There are 81 assets there. In more than 200 it exceeds Fuerteventura, where the citizens infected with Covid-19 are 283, after the island counted 27 more positive pictures that raise its global figure to 1,946.

La Palma added another contagion that places at 447 the global count of the island in which there are 13 people still affected by the virus. On the contrary, neither in El Hierro and La Gomera did not detect new cases of coronavirus, so that in the first territory the accumulated remain at 300 and the active at four. On the island of Gomera, the positive diagnoses registered since the beginning of the pandemic are 222, although there are five cases that are still ongoing.

As reported by Health, the cumulative incidence at seven days in the Canary Islands stands at 66.22 cases per 100,000 inhabitants, while at 14 it is at 131.02 cases. Until yesterday, in the Archipelago a total of 933,110 PCR tests had been carried out in the Islands, of which 3,093 correspond to Saturday.

The Ministry of Health, through the Directorate of the Canary Islands Health Service, regulates the limitation of inter-island mobility established in the specific and temporary measures for the containment of Covid-19 for Easter. The resolution, which is expected to be published today in the BOC, determines that all passengers traveling between islands, between March 26 and April 9, must submit a responsible statement proving the reason for the trip. For those movements that are not adequately justified, travelers from six years of age must present a negative active diagnostic test (PDIA) carried out 72 hours prior to arrival at the destination. This limitation will be in effect from 00:00 hours on March 26 to 24:00 hours on April 9 and affects inter-island movements by air or sea, regardless of the alert level of the island and the place of habitual residence. . The limitation does not affect travel between the islands of La Graciosa and Lanzarote for residents of the former. Nor to trips with origin or destination abroad or in the rest of the national territory, which will be governed by its specific regulations. | LP / DLP