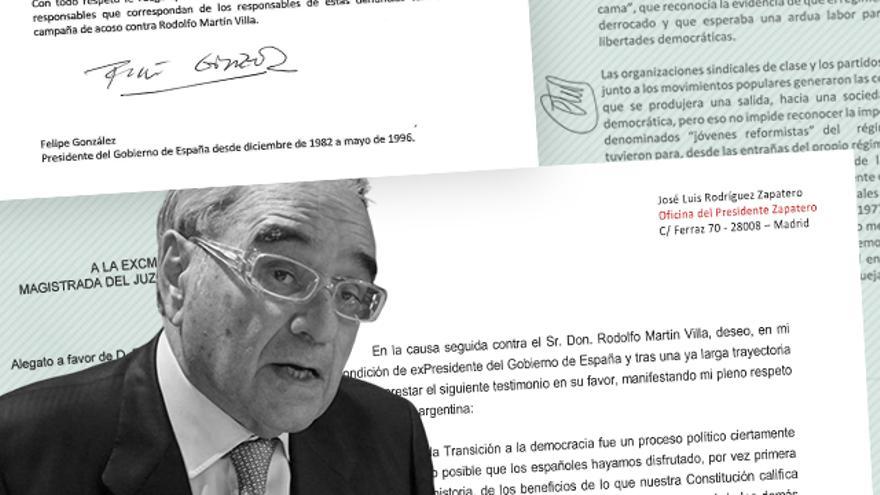 Former Minister Rodolfo Martín Villa has presented several letters of support to him for his statement before the Argentine judge María Servini. Among them, that of the former secretary general of CCOO Antonio Gutiérrez, who entitled his writing “Now I do thank Martín Villa.” In it, he exempts him from responsibility for the murders investigated and states that charging him with such crimes “is not only a sarcastic and unsustainable misrepresentation of his career, but of the entire Transition to Democracy process.”

To the attention of

NOW I DO THANK MARTIN-VILLA

At the end of February 1976 I was arrested at the gates of the Michelin factory in Lasarte, hitting San Sebastián. He was a worker for the multinational company in the Valladolid factory and the management had just decreed the lockout due to the strike that we had started ten before, demanding compliance with the Labor Ordinance of the chemical industries that set the weekly working day at 45 hours, while the company he imposed 48 on us in rotating shifts that we changed every fortnight; in such a way that in the shift changes the rest hardly lasted a scarce and sour Sunday (it folded at six in the morning on Sunday and had to return to the chopping block at six on Monday).

Although the strike had been triggered by my dismissal and was limited to the Valladolid facilities, the reason was of interest to all the workers of the Michelin group, so we decided to seek their solidarity and involvement in the struggle. To do this, we chartered several cars with pickets with which we were informing at assemblies, improvised and illegal at the time, to the companions of Aranda de Duero (the most recent); from Vitoria (the largest) and from Lasarte (in those years the head of the group for all of Spain). While waiting for the departure of the afternoon shift workers, a camouflaged Civil Guard utility vehicle appeared with various numbers under the command of a first sergeant who, putting the “naranjero” (submachine gun) on my chest, made it clear that I was detained. . From the Lasarte checkpoint I was taken to Command 511 of S. Sebastián (Intxaurrondo). Its Commander was Antonio Tejero who, after throwing some pages on the table that apparently contained my police file, welcomed me with the following words: “… give thanks to those reformist ministers who are Reds and Liberals; because With this file you didn’t get out of here alive, son … ”

I remained detained for several days without going to court, receiving metaphorical “chops from Mombuey” (at that time I was unaware of the existence of such a beautiful town in the vicinity of Sanabria and even more so that they had such excellent meat).

It still took a few weeks for employees of the other Michelin units to join the strike, which lasted a total of 105 days. Throughout that period, no negotiation was possible, not even with the mediation attempt suggested by the Minister of Union Relations, Rodolfo Martín-Villa. The then head of human resources of the group, trained for the delicate function of managing “human capital” in the war in Algeria as a member of the OAS, snapped at us that: “he had not negotiated with the Algerian FLN that had submachine guns and less I was going to do it with workers, who were also Spanish “.

We precisely held a coordination meeting of the Michelin Workers Commissions in Vitoria around March 3, in which we analyzed the generalization of conflicts throughout the province, which in principle were associated with the wave of strikes that were taking place during the entire first quarter of that year “76” promoted in most cases by Workers’ Commissions, but there they acquired a growing tension with which the channels for negotiation narrowed; flooded, above all, by some closed-in-band bosses that fed back with the exacerbation of the conflicts in charge of some so-called Anticapitalist Commissions. And in the end the tragedy broke out.

The police firing at protesters leaving an assembly in a church and the five deaths caused by their bullets had no justification. But the justice and reparation that the victims deserve in this and in any other case is never achieved by pointing out a false culprit. Paradoxically, the figure of the scapegoats has served for the opposite: to distort justice and to provide impunity for the true culprits.

As Rodolfo Martin-Villa is amply accredited, not only did he not order to shoot but, together with other members of that government such as Adolfo Suárez or Alfonso Osorio, participated in the decisions that cut the spiral of violence that was being experienced in Vitoria in the afternoon of that March 3, 1976, as soon as he found out what had happened at the edge of noon.

Against what is adduced in the complaint filed against Rodolfo Martín-Villa, attributing direct responsibility for the police action in the events in Vitoria, I would like to suggest that thanks to the absence of such a temperamental incumbent minister who exclaimed “the street It’s mine! “, we had active, among others, Rodolfo Martín-Villa focused on just the opposite, in sharing the public, physical and institutional space, so that once we could live together in peace, the tragedy of Vitoria ended . He did not order firing, but tempering; and he got it.

The Spanish Transition was not a sugarcoated process free of violence and full of dialogue and good manners. Of the first there was more than the account and the second arrived late and fragmented. Nor is it a model to follow mimetically, as has sometimes been claimed by some trying to export it to other countries that had suffered dictatorships, particularly in Latin America. But it is exemplary that for the first time in the history of Spain, the modernization effort of a part of its society did not end up being beaten to death by the most reactionary part, the one that has generally held the most power. For once the “club duel” with which Goya had brilliantly captured the repeated historical failures of our country, hung on the walls of the El Prado museum.

Among its architects, there was no need to thank each other as neither granted the other freedom. They were of very different political matrix, of conflicting ideologies; they participated in different ways and from different periods. Although all the wickers were essential to weave the basket of Spanish democracy in which we all fit. Even those who doctrinally abjured democracy.

But unfortunately they did not limit themselves to doctrinal denialism but tried to abort it by killing. Some, those nostalgic for Francoism because they calibrated that the simple fact of reinstating democracy through dialogue was an amendment to the entire atrocious civil war to which they resorted to usurp power and to their forty years of dictatorship that far from being one of peace and Progress was in evidence as the stage of greatest disgrace, injustice and mediocrity in history. Others, the ETA terrorists, because they lacked the slightest justification to kill during the Franco regime, were definitively disarmed in a democratic Spain that was making its debut with amnesty and whose unity was no longer going to be imposed as an act of force from the center but rather it was configured as the consequence of a constitutional pact which simultaneously recognized the right of its peoples to self-government; as it finally enshrined the eighth title of the Spanish Constitution of 1978.

In that context, those who suffered the violence the most were, on the one hand, the organized labor movement, the object of the murders perpetrated by fascist groups, the best known being that of the labor lawyers from CC OO from the office on Atocha street in Madrid; although very soon we were also the target of ETA attacks, since in 1977 the headquarters of our union in Bilbao was attacked and burned. On the other side of the political spectrum committed to the transition to democracy, it was those who came from the regime who had to withstand the greatest attacks from both sides. Among them, Rodolfo Martín-Villa was perhaps one of those who received the most threats and invective, both from the ultra-rightists and the terrorists; and to some and to others it responded by redoubling its commitment to the dialogue process towards democracy. Consequently, charging him with crimes of murder and even genocide is not only a sarcastic and unsustainable misrepresentation of his career, but of the entire Transition to Democracy process. In this way, the memory of the struggle for freedom and democracy in Spain is not honored, but rather dishonored.

The laws on memory are useful to protect historical investigations and other actions that contribute to clarify facts and even seek reparations to the victims of our past. But the memory of a country is not legislated but is treasured by teaching its history objectively and in some countries like ours the courage is still necessary to teach it without mutilations. This teaching germinates educating one generation after another in civic values.

Paradoxically, one way to ruin democratic memory is to support lawsuits such as the one that blames Rodolfo Martín-Villa for crimes as heinous as they are false associated with the Transition to Democracy process. Turning that collective achievement into a historical frustration would only benefit those who encourage resentment; that before and now is the fertilizer of intolerance and ultimately of violence.

I never thanked any of the ministers of that government of ’76, as that civil guard turned into a coup leader told me angrily, who, by the way, was dismissed a short time later by Martín-Villa himself to stop doing misdeeds in Intxaurrondo. It was enough with mutual respect from the notable and never hidden political differences that we have. But now I do want to thank you for avoiding violence as a minister whenever possible and wherever it came from. A gratitude full of respect because if in this country we lose respect we will lose everything again.

Independent deputy in the candidacies of the PSOE 2.004-2011