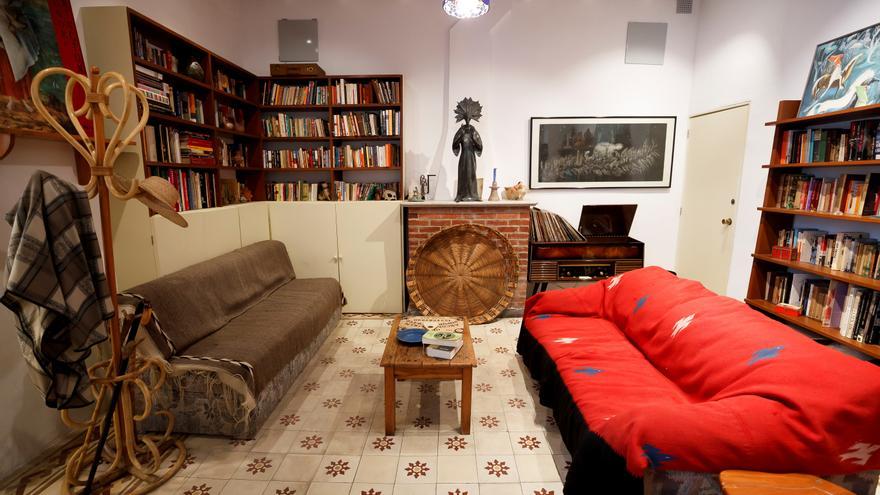 Mexico City, Apr 7 (EFE) .- A half-smoked cigarette in front of a cup of tea in the kitchen, photographs of Queen Elizabeth II in a closet, creams from the bathroom she used to take care of herself or a book dedicated by Octavio Paz on the shelf they exhibit the most intimate face of the painter Leonora Carrington in her recently completed study house in Mexico City.

“The things that we have, that we inherited and with which we decided to accompany each other speak a lot about ourselves. When people come here they will be able to complete a figure of Leonora that perhaps is not fully known,” he told Efe this Wednesday. Alejandra Osorio, Academic and Cultural Director of the general coordination of Diffusion of the Metropolitan Autonomous University (UAM), the body in charge of housing rehabilitation.

In the street of Chihuahua number 194, in the central colonia (neighborhood) Roma, now one of the most cosmopolitan points of the capital, lived for 60 years Leonora Carrington (1917-2011), of British origin and Mexican nationalized, in which she suffered and enjoyed her family life with her husband Emérico Weisz and their children Gabriel and Pablo.

THE DESIRE TO KEEP LIFE

The house, which was acquired by the UAM in 2017 with the aim of discovering part of the intimacy of the surrealist artist and creating a place to visit and study, was full of objects that belonged to the family and that treasure an important part of the essence of the painter and writer.

Pablo, one of her sons, wanted to preserve this essence and share it with Mexicans, a town that awakened the artist’s imagination and in which she died four years after her Hungarian husband, whom she nicknamed Chiki, and who spent her last days in the same house.

For three years, those responsible for the project constantly maintained communication with Pablo, who lives outside of Mexico, but they also conducted interviews, collected testimonies, viewed images and analyzed photographs, among many other things, to reconstruct every detail of the house, as as it was in the last years of Carrington’s life.

They also had to make complex decisions to find the balance between carrying out the urgent repairs that the house needed and turning it into an accessible cultural space, and maintaining the identity of the building.

“We seek to find the balance between rebuilding walls, removing dampness, etc., and making it functional. And at the same time and mainly we wanted to preserve the essence of the house when Leonora lived in it. That was very important,” explains Francisco Mata Rosas to Efe, general coordinator of Diffusion of the UAM.

But one of the most important, time-consuming and interesting parts of the job was creating an inventory of the more than 1,800 objects found in the house, a process that was carried out from June to December 2019 by a team of between five and ten people. , depending on the needs.

Between all of them, they inventoried object by object, a photographic record was made, a file was made of each one of them and they were examined for any type of “special” finding. As could be inscriptions, dedications or photographs in the middle of a book or notebook.

“It lasted about six months and it was a process that allowed us to know exactly what we had in the house, in terms of documents, photographs, clinical files, the history of the sales, of the loans that were made of Leonora’s work, letters that came to him, some that he ended up not sending … “, says Osorio.

An inscription on the table in the living room that reads “Leonora + Chiki”, which a friend of the couple carved with an ice pick, or photos with their children and pets on a kitchen cabinet, remember her as a woman normal.

Beyond the enigmatic nature of her art and the tangles and curves in which her work was immersed, Leonora lived as another person. He did not throw away his broken glasses, which remain on a bathroom shelf, and he kept his aprons to paint for years.

“This space of intimacy, knowing which books it was inspired by, where the idea of ​​spirals and elliptical figures came from, those answers are here,” says Osorio.

On Tuesday, the Casa Estudio was finally presented, albeit virtually and with various audiovisual materials.

It can be visited cybernetically and with access to viewing objects in three dimensions.

And when the pandemic allows it, they hope to be able to receive groups for guided tours and thus, finally, become part of the museum heritage of Mexico City, although for them the house moves away from the concept of “museum”.

“For us it is not a museum, we use the figure of home study among many other reasons because for us it is an academic and cultural project, in the same proportion”, details Mata Rosas, who highlights the importance that, in crisis like the current one , the public university promotes culture.