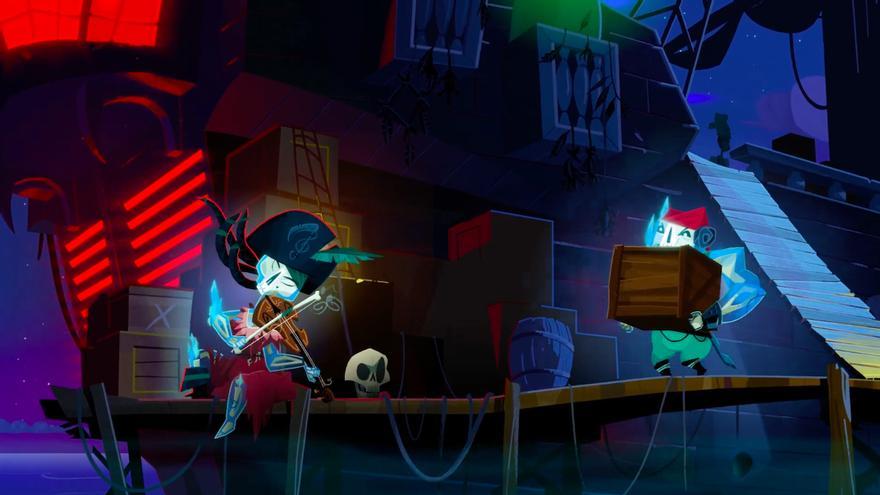 Years before the original PlayStation was released, one of the most passionate companies in the video game industry was Lucasfilm. Known for graphic adventures that are technically personal as well as hilarious in their dialogues, she reached her pinnacle of genius with two titles starring a pirate with an impossible name, Guybrush Threepwood.

A squeezed grapefruit that ends up being a zombie: what secrets are hidden behind the sounds of great video games

The news of a return to the classic coordinates of this saga has caused a stir in the gamer scene. Already last Friday one of its original creators, Ron Gilbert, warned of the imminence of the project in his Web page. The problem was that his announcement coincided with April Fool's Day, so it was misconstrued as a joke by the author.

Today, however, its veracity has been confirmed thanks to an advance uploaded to the YouTube channel of Devolver Digital, a company known for having developed one of the most recognized independent games of the past decade, Hotline Miami. Ron Gilbert himself has endorsed the news with another entry post on your blog.

In the short but fun Advancewhich jokes precisely with the author's alleged refusal to revisit the saga, is anticipated to be released in 2022. With the title of Return to Monkey Island, it comes as a collaboration between Lucasfilm Games, Devolver Digital and Terrible Toybox, a studio under which Gilbert He edited Thimbleweed Park in 2017, a proposal faithful to his style.

George Lucas' bet that gave rise to a myth

The stir that the news has caused makes a lot of sense, since The Secret of Monkey Island is probably the most fondly remembered game in the entire LucasArts catalog. Originally known as LucasFilms Games, it was created as a side business to George Lucas' film production company.

This video game, released in 1990, was the company's fifth to use the SCUMM engine, a humorous abbreviation for Script Creation Utility for Maniac Mansion. Among those who benefited from such technology are such classic games for the player of a certain age as the crazy Maniac Mansion (1987), the fast-paced Indiana Jones and The Last Crusade (1989) or the evocative Loom (1990).

All of them had common characteristics such as operation based on the simple point-and-click method (directing the protagonist's path by pointing to a specific point on the stage), interacting with other characters through very comical dialogues and presenting simple graphics but showy It was the pixelated era, in which the recent jump from the four colors of the CGA system to the 256 of the VGA had already brought about a revolution.

The first title of the saga about pirates appeared in 1990, with the name of The Secret of Monkey Island. Its sequel, Monkey Island 2: LeChuck's Revenge, was published just a year later. That it has been specified that the argument of Return to Monkey Island will continue where this second part left off is not a trivial detail, for several reasons. The first, that this ending is still talked about as one of the most surprising in the history of the video game.

The second, that despite the fact that the saga continued with chapters such as The Curse of Monkey Island (1997), The Escape from Monkey Island (2000) or Tales of Monkey Island (2009), for its fans these had betrayed the original spirit. In fact, other LucasArts titles such as Sam & Max Hit The Road (1993) or Full Throttle (1995) stood out in their graphics as a challenge to another giant of the time, Sierra On-line, responsible for Leisure Suit Larry or the King's saga Quest.

The first two Monkey Island narrate the adventures and misadventures of Guybrush Threepwood, a young man who dreams of becoming a great pirate of the Caribbean. His rivalry with the evil LeChuck and his attempt to conquer Governor Elaine Marley are developed through little short of delusional plot twists. These games are still a source of memes today, with some moments worthy of the best Monty Python among which, for example, the remembered insult match.

In addition to its conception as a direct sequel and the return to the fold of the original writer and director, fans of Monkey Island have celebrated the addition to the project of Dave Grossman, developer and co-writer with Gilbert of the first two games. Also that of the composers Michael Land, Peter McConnell and Clint Bajakian, responsible for its fantastic soundtrack, and the original voice of Guybrush, Dominic Armato.

In the teaser trailer revealed by Devolver Digital, a specific publication date for Return to Monkey Island is not specified, only that it will take place throughout 2022. Nor has it been revealed for which devices it will be available, although it is assumed that since it is a saga more focused on the delights of the script than on technical spectacularity, the game will probably be multiplatform. And that includes, how could it be otherwise, a monkey with three heads.