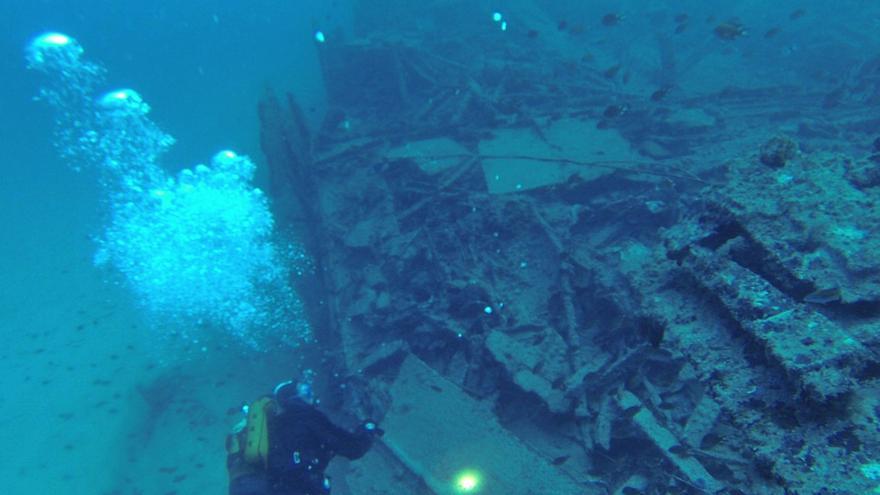 Alfonso XII's gold chests were “the pay to be delivered to the Spanish troops in Cuba, which was at war for 30 or 40 years until it ceased to be a colony of our country at the end of the 19th century. In fact, at the time of the sinking, a regiment of 116 soldiers was traveling on the ship who descended ashore and were welcomed at the San Francisco Barracks where they had to wait for supplies to arrive again and to be shipped back to Cuba. ”. “Shipping companies were not used to insuring the ships, but they did insure the cargo, so the insurers, in order not to return such a sum of money, wanted to recover the gold at any price. They brought a team of special divers from England who spent weeks working on a very risky mission. In fact, it cost diver Alexander Lambert a health problem and he had to stop being the head of the UK company Siebe Gorman ”.

In February 1885 the ship was wrecked and in October or November the Arabian ship arrived with Captain Stevens and the divers with their equipment. “They had to place another ship on top of the Alfonso XII so that it would not move. They made multiple dives to the bottom. As they could not find the tenth box, they decided to forget about it because it involved a lot of risk, but the following year the diver David Tester, of the three from the first mission, returns convinced of finding and removing the chest. He dives an enormous number of times that cost him his life due to a decompression attack and is buried in the English cemetery in San José ”.

The ship had an enormous design and luxury, with large rooms and telephony in the cabins, as well as the most advanced techniques at the time. However, it crashed and sank. “La Baja de Gando is a basalt mountain that remains at water level. Just six months before this steamship another French ship, the Ville de Para, wrecked in the same way. Apparently, the captain of the Alfonso XII himself that afternoon, before setting sail, was talking about the danger in the area, but after two hours of sailing he hit himself, even knowing where the Baja was located. The boats are trusting, they get confused, they go through Telde and Melenara to Maspalomas to turn at the Lighthouse, they establish the route and they do not realize that this part of Gando has a special attraction, with its eddies and currents. Still in the 70s another fishing boat sank again and recently a tugboat left the propeller and a whole set of parts that are also at the bottom of the sea ”.

The Alfonso XII was a mail steamer built by the Trasatlántica company directed by Antonio López. “At the time of the sinking, it was already directed by his son, Claudio López. The events occurred on his sixth trip. It collected soldiers from the ports of Barcelona, ​​Valencia, Santander, Galicia and Cádiz, passing through the Canary Islands and bound for the Antilles because the ships of this company had two missions assigned by the Crown: the transfer of troops continuously from the Spanish ports to Cuba to maintain the rebellion and that of the official mail of the Peninsula with the Antilles. In addition, other passengers who had commercial activities in this area of ​​the planet were on board. They also had to bring people back and it took about 20 days of navigation ”.

The passengers and crew of the mail steamer were saved in the collision. According to the historian, “the fishermen on the beaches of Ojos de Garza and the Bay of Gando, which was not a military zone but a civil one, knew very well about the danger of the Baja and since so many accidents had already happened, as soon as they saw the risk they were running to the rescue because the ship would sink. The basalt mountain has two peaks that cut like a knife and there is no helmet to break free. The Alfonso XII made a huge hole in the bow, traveled a little over a mile, and sank. The fishermen saved, on this occasion, the entire passage. In the Ville de Para, however, there were two deaths ”. As for the captain of this sixth voyage, Juan de Herrera, Benítez indicates that he tried unsuccessfully to locate the file of the subsequent investigation, “since when there is an accident, an investigation and a trial are then produced. Possibly, de Herrera was sanctioned for losing the boat, but we have not found his trace ”.

The writer points out that “there have been many interventions in the Alfonso XII in which professional divers have participated in the decade of the 40s to the 70s ... until the entry into force of the Spanish Historical Heritage Law of 1985 and the country's accession to the Unesco Convention in 2009, where, as a ship with more than 100 years under the sea, it obtained the protection of Submerged Cultural Heritage. In Spain, from the 40s, the hunger for iron that was needed in those years of autarky began, so the business of scrapping sunken ships with sticks of dynamite was resorted to. However, the hull of this ship was manufactured in a shipyard in Scotland and was very well finished so it was impossible to fly. Scrap was successfully removed, but the steam is still intact, with the rudder blade and propeller on the shaft. In the 1970s, the metals were still being extracted. ”“ Many divers have passed through the area and multiple objects have been rescued. Back in the day, Navy divers extracted a complete set of dishes from such a luxurious ship. It is a fairly frequent trophy to find pieces of this tableware ”.

In this sense and in a return to the past, “in 1929 the requests to dive on the ship began after the last search for gold in 1886, but the insurance company, as the legitimate owner of the ship, did not grant permission. In 1945 Farray appeared who also requested the expedition without success, but unofficially carried out the extraction of objects. However, he could not find the missing gold box because the coins were kept in wooden chests that fall apart over time when eaten by jokes (Teredo Navalis), worms that eat this material. The coins would be left scattered around and the divers who came to the area in the 70s and 80s would begin to find them, with which the gold from the ship would go to multiple destinations ".

“I don't know how many coins will be left, if any, due to all the divers who have dived in the area. It is better for their owners not to sell them because they are subject to Cultural Heritage and it is a crime to market something illegally obtained from a ship with more than 100 years under the ocean. It is very difficult to calculate the value of this money because when it comes from a sunken ship it increases in relation to the same coin in the hands of collectors ”.

In the upper left image, the Alfonso XII wreck appears, which is still in the Baja de Gando area. Multiple divers have come over the years to browse and rescue objects or with the desire to find gold coins. In the top right photo, two of the divers from the first expedition in search of the money appear. In the middle, a coin from the time with the monarch's face and below, a model of the mixed steam and sailing ship. |