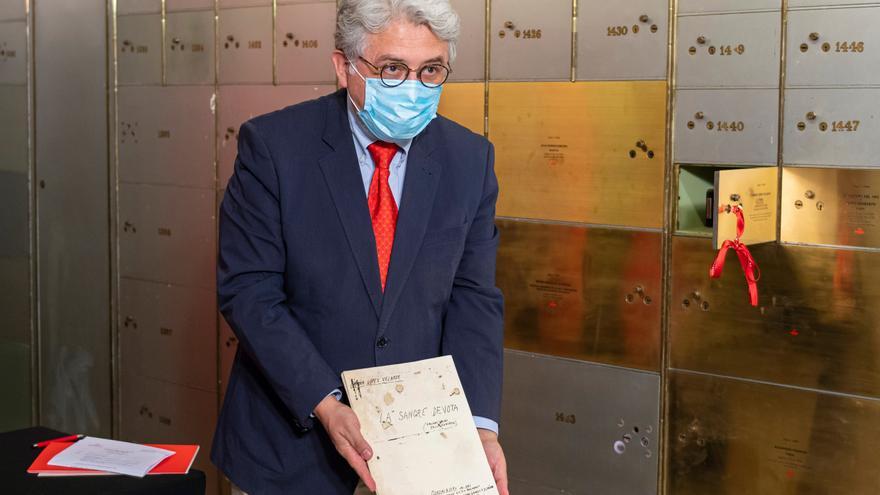 Box number 1441 keeps from today until June 15, 2024 an “in memoriam” legacy of the one who is considered the most “national” poet of that country, with whom modernism ended and contemporary Mexican poetry began. Instituto Cervantes in a note.

The vast legacy, which reaches number 82 of those deposited by personalities of culture in Spanish in the old vault of the Madrid headquarters of Cervantes, is made up of numerous personal and literary objects.

Among the first are copies of the birth certificate, of the so-called “baptismal certificate”, of the qualifications that he obtained in the Literary Institute of Aguascalientes and a pair of arracadas (a type of earrings for the ears with a hanging ornament) made in Zacatecan silver filigree, belonging to his family.

From the literary field, an original edition of the Revista México Moderno is included, with a poem by López Velarde dated in 1920; a facsimile copy of “Words on the fly”, a CD with poems interpreted by Enrique Rocha and a copy of the book “Ramón López Velarde. Velardian manuscripts a hundred years from ‘La suave Patria’. Facsimile and studies”, edited by the Zacatecano Institute Ramón López Velarde Culture and the Mexican Academy of Language.

This tribute, which coincides with the centenary of his death, has been organized by the Centro de Estudios Mexicanos UNAM-España, the Instituto Zacatecano de Cultura Ramón López Velarde (owner and legatee of the objects), the Mexican Academy of Language and the Cervantes Institute.

The director of Cervantes, Luis García Montero, highlighted the importance of the culture of Mexico in the Spanish language, “the country with the most native speakers of Spanish and whose tradition has shaped a good part of our contemporary literary consciousness.”

García Montero stressed that López Velarde is a “very significant writer for contemporary poetry and for Mexican culture.”

Also participating in the event were Andrés Ordóñez, director of the Center for Mexican Studies-UNAM Spain, for whom “López Velarde’s work involved the renewal of Mexican poetry”, and Alfonso Vázquez Sosa, general director of the Institute that bears the name of the honoree , who detailed the content of the legacy in memory of “‘Monchito’ for the Zacatecans” one hundred years after his death, which occurred when he was only 33 years old.

The Spanish ambassador to Mexico, Juan López Doria, and the director of the Mexican Academy of Language, Gonzalo Celorio, also attended, who then gave a keynote address on the author.

Today’s “in memoriam” legacy joins those of three other great Mexican authors –all of them Cervantes Awards– who personally left their own legacies at the Caja de las Letras: José Emilio Pacheco (April 21, 2010), Elena Poniatowska (April 21, 2014) and Fernando del Paso (April 21, 2016).