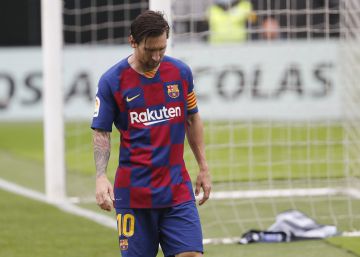 Early in the morning of this Monday, the official account in Spanish of Barcelona on Twitter issued an apparently simple message: the emoticon of a goat followed by the name of Leo Messi accompanied by a photo of the Argentine star with the team's third kit. The tweet actually contained a whole declaration of intent, since the translation of goat into English, goat, corresponds to the acronym of greatest of all time, the best in history. At least at the institutional level, Barcelona is willing to forget what happened in recent weeks and rebuild the bond with its star.

And that, assuming that what happened is no small thing. First, the declaration of war between the player and Barcelona, ​​which arrived at the Barça offices via burofax in which the player claimed to leave the entity for free. Later, the days of controversies, meetings and confrontations, which ended with the footballer's father and representative, Jorge Messi, and his lawyers accusing Barcelona of making a crooked interpretation of the Argentine contract to retain him against his will.

Finally, the final act, starring Messi himself on Friday afternoon, in which, in an interview with Goal.com, the player accused the entity of having always turned a deaf ear to his requests, having broken his word and of lacking a project while acknowledging that if he finally made the decision to stay, it was to save the image of being faced with the club in court. This Monday, around 4:00 p.m., something similar to peace reached the entity when Messi reappeared in the Barcelona sports city ready to resume training for the game that will face Nástic this Saturday in the first preseason match.

"Professionals tend to leave a company long before they leave", analyzes Gonzalo Martínez de Miguel, CEO of Infova, a company dedicated to the training and development of managerial talent in Spain. Martínez de Miguel is optimistic and does not rule out a return of the best Messi, although before that they have to change quite a few things in the environment around him: “The commitment of talent has to do with the vision of the future and with hope. Returning these two elements, the enjoyment can return without any doubt ”. But for this, the expert stresses, Barcelona must first be very prudent and know that it steps on crystals. The way to definitively remove the footballer now would be to show him a lack of sensitivity: "Treating Messi simply as a spoiled player who must be put on the waist is the most counterproductive."

Koeman, the new Barça coach, therefore has before him the challenge of showing complicity and closeness with the Argentine player, although that, for the moment, is not a guarantee of anything either. Santiago Ávila, professor of Organization and People Management at EAE Business School and author of the book Learning to lead, does not see so clearly that the Argentine is recoverable: “The first thing to clarify is that Messi is a man of great talent, but he is not a leader. He has shown it now by wanting to leave Barcelona and he showed it when he wanted to leave Argentina ”. Bearing this in mind, for Ávila motivation, rather than something that has to be awakened, is an engine that must always work: “I tell my students that the desire to work must be brought from home. The best thing a company can do in this regard is not to spoil it, not to remove the motivation of those who have it ”. The situations in which employees threaten to leave and companies manage to retain them, he deepens, they only help to sow distrust between both: “When a worker wants to leave and a company throws a counter offer to him to stay, I always tell them to say goodbye because suspicion already arises. It doesn't usually go well. "

For Álvaro Merino, a professor at the European University, on the other hand, the key is precisely to apply a new, more subtle leadership style, capable of involving a person in a dynamic almost without them being aware of it. “What brings people together in the end is the common vision. Talents like Messi are also more than used to pressure, they have lived with it since they were young. I am sure you will know how to handle yourself. Who knows, sometimes a role change brings out the best in people ”, says Merino.