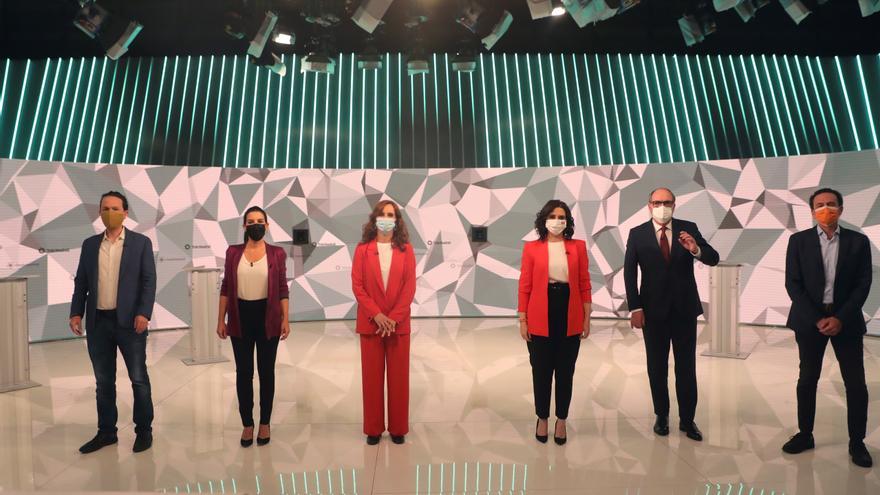 Media Spain squints between the drama of Rocío Carrasco and the “Ayuso show” while the other media polemicizes with the secession of the rich from football that Florentino longs for. It is as if the president of Real Madrid follows the heartbeat of the Madrid government in sports, which neither feels nor suffers, but does insult those who make up the hunger queues; rejects that the rich pay more taxes than the poor and raises like no one here, everyone who seeks life as best he can. They call it freedom when in reality it sounds like selfishness, individualism and lack of solidarity.

On schedule reality, and competing in audience with the daughter of “the greatest”, started a debate whose organizers exploded with a media display of six hours of live between the preview, the debate and the post. Madrid, at full throttle. Madrid, first. Madrid as a sign of an identity that never existed or is even recognized by Madrilenians, beyond the “processism” represented by a president who in just two years has gone from being a perfect stranger to being a leader of the new Madrid right in its entirety. Married trembles and MAR struts. The “ayusismo cañí”, yes, it has made a hole in the national park by work and grace of the one who was the maker of the first Aznar and also comes out unharmed, despite the attacks of a coordinated left, in a televised debate in which never wanted to be.

On their screens, a “Madrileños por España” with national televisions acting as amplifier and with an Ayuso against all cooking in their own sauce. The president rode on the euphoria of knowing herself first in the polls and willing that no data or accusation from the left would touch a single curl of her knighthood. In a more like a bar than a presidential bar, she was haughty and haughty as she came to say: attack me, that each attack is one more vote. The intense cross of reproaches of the different candidates of the left did not give him respite. One after another they cornered her. Pablo Iglesias, Mónica García and even Gabilondo, who for the first time entered the melee. “I did not bring the virus, although you do not believe me. The virus that began by devastating China, passed to Italy and entered Spain through Barajas, where there has been no type of control,” he tried to defend himself against the forcefulness of the figures that place the region at the head of deceased, infected, hospital admissions and ICU patients.

With the insult always in his mouth, Ayuso did not deprive himself of describing the candidate of Podemos, Pablo Iglesias, as “pantomime” and “petty”; of questioning the More Madrid, Mónica García, about her professional authority as a healthcare provider and of ignoring Gabilondo by treating him as a kind of puppet from La Moncloa. In the middle of the debate and already involved in economic matters, the PSOE candidate was forced to respond to his opponent “I am not Sánchez, I am Ángel Gabilondo and I will introduce myself.”

The socialist exhibited a new record and surprised from the beginning by displaying on the set the letter by which the Community of Madrid gave instructions to the residences to deny hospital assistance to the elderly patients with COVID during the first wave of the pandemic. “That is not management, it is ideology,” he said. Gabilondo also exploited the biggest mistake that Ayuso has made so far in the campaign by calling those who go to the hunger queues as supported and subsidized by saying that they were ashamed of his words. “They deserve all the respect and all the attention,” the president tried to amend herself.

However, Pablo Iglesias was the one who dominated the scene the most and starred in the most tense moments with Ayuso. The first, when he ordered her not to smile while he spoke of the deceased and the drama experienced in the residences while accusing her of not having cared about people and of “lying” with the data.

“You are president. Do you know how many people are on the waiting list in the Madrid Health Department? You don’t know. 539,000,” he snapped. “He asks me Manichean questions,” Ayuso complained as another question rained down on him: “What are you going to do to avoid waiting lists?” Far from answering not a single one of the purple candidate’s string of interpellations, that of the PP took off with another question to his interpellant: “How many hospitals are there? He has no idea, he comes temporarily to save his project.” Iglesias interrupted him to display the data himself: “In the Community of Madrid there are 84 hospitals, 48 ​​privately owned and 36 public. You have asked me and I have answered. I have asked you and you do not answer. But the data is I give and ask him, what is he going to do? ” “What is the percentage of deaths in residences?” She insisted while she attacked Iglesias’ management as vice president of the Government: “How many residences did you go to?”

Ayuso showed that he does not know numbers, but he does respond with personal disqualifications, with expletive and outburst. “You are going to the chaletazo,” he told Iglesias in reference to his home. An exit that the Podemos candidate took advantage of to say that he was paying for his house and that, “Sarasola does not give me a luxury apartment.” The president promised to show the bills for that controversial accommodation, something she has not done in the last year.

Ayuso also skidded on the first curve in which the More Madrid candidate placed him when she spoke of an investment of 1,000 million euros in Primary Care and Mónica García corrected her to point out that there were only 80 and put it in evidence when she did not know how many hospital admissions had occurred during the pandemic. In front of him he had a candidate who, like García, a doctor by profession, was “on the front line against the virus, seen the collapsed ICUs, the patients and family members broken and alone” and also is not willing to accept lessons from the miserable extreme right. ”

The Ciudadanos candidate tried, but did not find his place in the world or in the debate. Edmundo did not know whether to attack Monasterio, Gabilondo, García or Iglesias. Anyone except Ayuso, with whom he is willing to rule again. Well that will be if he gets the 5% that all the polls deny him and it remains to be seen that his intervention in the debate will help him to overcome. In the end, he fought with Monastery to see which of the two was better support for the PP.

And what about the Vox candidate? That far-right aspirant who confronts everyone and everything and did not contribute more than the stupidity to which she is accustomed, especially when she talks about immigrant minors, to whom she dedicated one of the posters distributed by her party yesterday on set and that They have motivated the opening of an investigation by the Prosecutor’s Office for an alleged hate crime. It took him five seconds to name the unaccompanied immigrant minors. And he did not abandon that path until the end.

The lyrics and the music of the whole night had the tone of the rabid discord usual in Madrid politics and a variety of chords in the right block that contrasted with a left coordinate that for the first time in a long time did not confront each other. Will 4M help them? Namely. So far, the polls do not say that. This Thursday we will have to read the express poll prepared by the Tezanos CIS in case something moves.