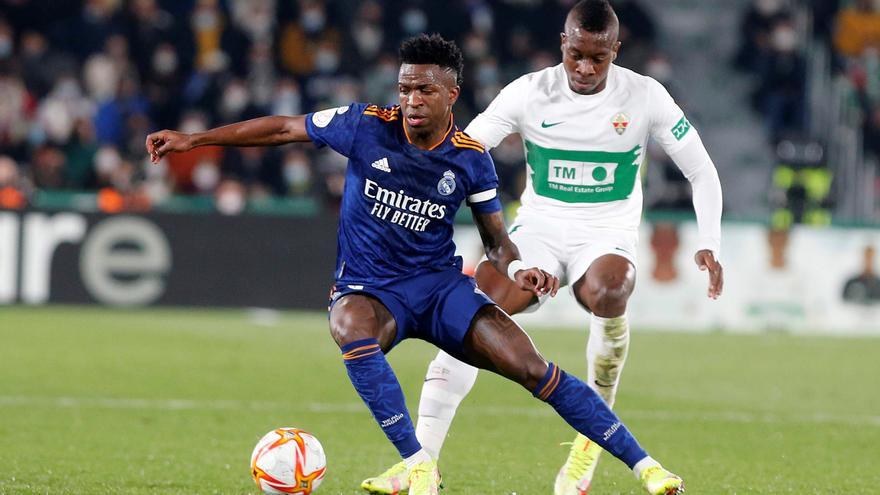 Real Madrid Y Seville they will resume the pulse by four points separated by Santander League, that links a new day after the last games of the previous play this week and with the round of 16 of the Copa del Rey, which have just been resolved tonight with a commitment for the whites.

After winning the first title of the season by winning the Super Cup against Athletic in Saudi Arabia, Carlo Ancelotti's team returns to the Bernabéu with the desire to add a victory and thus prolong the tribute to Paco Gento, its honorary president and club legend who died two days ago.

The whites They will repeat the match against Elche, a team that was eliminated this Thursday in the round of 16 of the Copa del Rey. In the League, the Alicante team have just linked two consecutive victories, over Espanyol (1-2) and Villarreal (1-0), which keep them at a distance from the dangerous zone.

Setting the pace the leader follows Sevilla, who after drawing last night in Valencia (1-1) is four points away, after a complicated week after being eliminated from the Cup against Betis and the serious incidents of the clash. Sevilla will host Celta, who breathes easy after beating Osasuna (2-0) this week, who conceded their third consecutive defeat away from home. The Galicians, who recovered the Peruvian Reanto Tapia after his knee injury, are one point ahead of the Navarrese.

Betis, after knowing the sanction of the closure of its stadium for two games due to the Cup incident, dHe will defend his third place in the clash that opens matchday 22 at the Espanyol field.

Very far from the top of the table, twelve points behind Real Madrid, Chilean Manuel Pellegrini's team faces this visit after thrashing Alavés (4-0) two days ago and thus breaking a streak of three games without winning in the League . This result leaves José Luis Mendilibar's team very touched, which still hasn't come out of relegation.

Atlético de Madrid and Real Sociedad, who met in the Cup with victory for the team from San Sebastian, will also fight for the other place in the Champions League, now in the hands of the rojiblancos. The two face this day still with one game less, since they have pending those of the previous one that coincided with the Super Cup, against Levante in the case of the Atléticos and against Mallorca in the case of the Donostiarras.

Forced to change dynamics, the defending champions host Valencia, after having only added six wins in their last 19 commitments. José Bordalás' eleven will arrive at the Metropolitano after scoring a point against Sevilla, which did not leave him completely satisfied. The coach left the Uruguayan Maxi Gómez out of the call and will lose José Luis Gayá, sent off last night for a double yellow card.

Real Sociedad also plays at home against Getafe, Whats Next on the rise with Quique Sánchez Flores and it has been reinforced with the transfers of Gonzalo Villar and Borja Mayoral, after passing through Roma. Encouraged now by their continuity in the Cup, the San Sebastian team recovered a place in the Europa League with their win against Celta (1-0), just like Barcelona, ​​after their draw in Granada (1-1).

17 points behind Real Madrid, those of Xavi Hernandez they visit the Alavés after his cup elimination at the hands of Athletic Y pending the renewal or not of the Frenchman Ousmane Dembélé.

The rojiblanco team, meanwhile, will manage the hangover from their victory over Barcelona in their visit to Rayo Vallecano, after falling in the final of the Super Cup. Andoni Iraola's group continues, along with Sevilla and Real Madrid, without losing in their stadium after ten games. The last one was settled with a tie with Betis (1-1).

Fighting for a position in Europe Villarreal will receive Mallorca in a delicate situation especially due to the casualties and after losing in Elche the previous day. The Balearic Islands conceded their eighth defeat against Levante, but retain a margin of 3 points with respect to relegation.

Granada and Osasuna will be fairly even in the middle of the table at Nuevo Los Cármenes, a stadium where the Navarrese have not won for more than 60 years and where the locals have gone seven games without losing, after saving a point against Barça in the last one.

Levante and Cádiz will resolve the relegation duel that, regardless of their result, will keep the Valencians at the bottom of the table due to the 4-point advantage that the Andalusians maintain after their draw two days ago with Espanyol (2-2), in Sergio González's debut in the bench as a replacement for Álvaro Cervera.

The Valencians, who have the Matchday 21 match against Atlético pending until February, reunited with victory after 27 matches two matchdays ago by beating Mallorca, they have won 14 of the 20 matches against Cádiz at home.