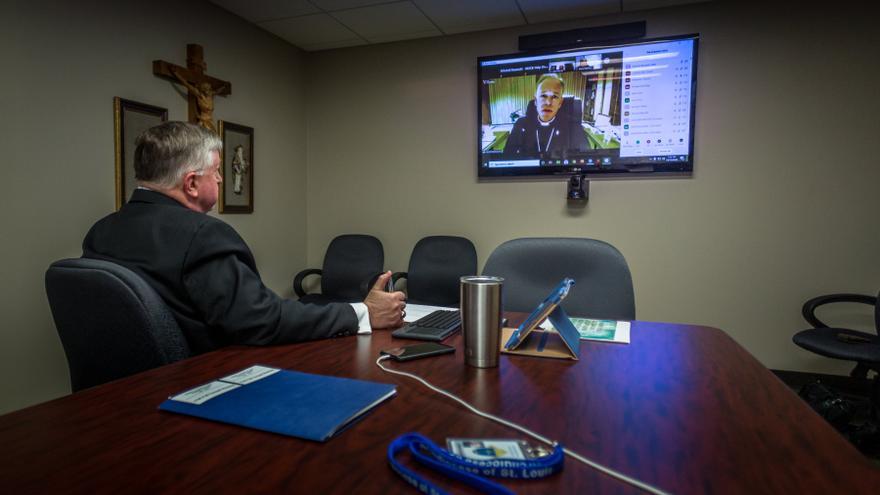 “It is not a problem of communion, nor of defense of life. It is about Joe Biden.” The sentence of a North American bishop clearly reflects the deep division in the US episcopate, which this Friday voted on the controversial proposal to draw up a document on the excommunication of Catholic politicians who support abortion. Two-thirds of the US Bishops’ Conference has supported drafting such a document. The fight continues.

That text will finally go to the plenary session of the American Catholic Church in November. A majority of the country’s bishops have opted to continue the pulse with Biden. The ultras have won the first battle, but the more pro-Francis sector has bought time to reach a position that does not undermine the good relations between the White House and the Vatican that have been established since the victory of the Democrat. Now, Rome will have room to make explicit gestures in favor of Biden. However, this process has already left the American Church divided and with the feeling that the bishops were much more comfortable with a president like Donald Trump than with the second Catholic president in their history, after John F. Kennedy.

The warnings from Rome were useless, asking that the issue not be addressed, nor the close collaboration between the new administration of the White House and the Holy See on climate change, the fight against the coronavirus or reducing inequality. An important sector of the US bishops, protected by their president (the Archbishop of Los Angeles José H. Gómez), forced the bishops to vote a resolution that has no legal effect (Biden can only be denied communion by the archbishop of Washington, Wilton Gregory, who has already announced that he will not do so), but clearly shows the strong opposition of the North American Church to Pope Francis.

Because the kick Biden is, at heart, a slap to Bergoglio. This is the only way to demonstrate how, despite the fact that the episcopate clarifies that it “constantly” quotes Pope Francis, only 52% of the American Catholic leadership approved a document that includes a quote from chapter 8 of the Amoris Laetitia –The exhortation of Francis to the bishops on the family–, the one who opens the door to communion for the divorced and remarried.

Cardinals and bishops close to Francis, around 70 (among the more than 300 prelates) have tried to stop the document, which threatens to break the bridges of dialogue with the White House. “Any effort to exclude Catholic leaders from the Eucharist will push the bishops to the heart of the same toxic partisan struggle that has distorted our politics,” lamented Cardinal Tobin, one of the Pope’s men in the US who, like many others, they are stunned at a debate that would never take place with Trump. That, certainly, he did not support abortion, but he did support the death penalty, the sale of arms or racism and the exclusion of immigrants.

One of the main protagonists, unwittingly, in this crisis, is Cardinal Gregory. As Archbishop of Washington, Joe Biden is your parishioner. Only he – or the Pope – can forbid him communion. Something it won’t do. During his speech in the plenary, which is being carried out by streaming due to the coronavirus, the cardinal pointed out that “the choice we have is to follow a path to strengthen unity among us, or to settle for voting on a document that will not bring unity. But that could damage her even more. “

In front of them, Bishop Niam, of Baker, who maintains that “we have never had a situation like this, in which a Catholic president opposes a teaching of the Church. Something that another cardinal close to the Pope, Blaise Cupich, considers a “trap” that will only lead to breaking the unity of the Church.

For the bishop of Madison, Donald Hying, the faithful “are confused by the fact of having a president who professes a devout Catholicism but promotes the most radical pro-abortion policies in history.” In the debate, the silence of the New York Cardinal, Timothy Dolan, is surprising.

Be that as it may, the tense debate among the US bishops is one more example of the extreme polarization that exists in the country, and which deeply affects a very conservative Church, and which has been one of the first to ‘turn off the tap. ‘of donations to the Pope’s charitable works. Meanwhile, as he did during the G7 summit, Joe Biden continues to go to mass every Sunday, and take communion. His team, Efe reports, spends time “making sure that, when you go to church, they don’t veto your access to the sacrament.” The scandal of an unknown priest denying communion to the most powerful man on Earth would be unforgivable, they argue. Officially, the White House has not made the slightest appreciation of the debate.

Nor, the Vatican, which after the letter from the prefect of the Doctrine of the Faith, Luis Ladaria, the president of the US bishops, asking him to avoid discussion, and from Bergogio himself, who a few weeks ago proclaimed that communion “is not the the reward of the saints, but the bread of sinners, “he preferred not to interfere with the episcopal assembly. In fact, the possibility of a meeting between the Pope and Biden during their European tour was raised, which finally did not take place. In this context, perhaps before November.