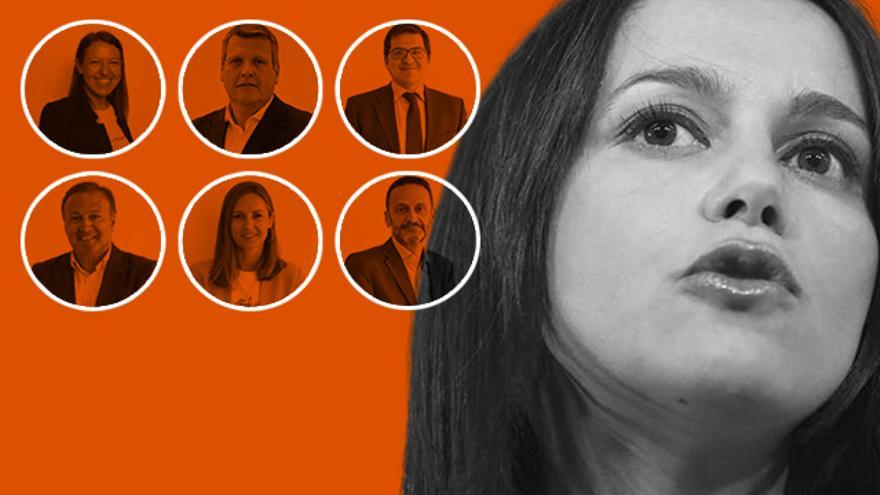 Inés Arrimadas has concentrated the power of Ciudadanos in the Permanent Committee of the party, its hard core, made up of half a dozen leaders who are the ones who make the important decisions. This body, which meets every week, is made up of seven people, half of whom it had when Albert Rivera presided over the party with an iron hand, to which they have decided to make an amendment to their previous strategy.

Along with Arrimadas in the Permanent Committee are Marina Bravo, as general secretary; Carlos Cuadrado, as First Deputy Secretary General; José María Espejo-Saavedra, as deputy general secretary; Joan Mesquida, as second deputy general secretary; Melisa Rodríguez, as the national spokesperson for the Executive, and Edmundo Bal, who is the deputy spokesperson for the parliamentary group in Congress. Some of them were part of Rivera’s team and endorsed the veto of any agreement with the PSOE. Now they have adapted to the new guidelines set by their successor, contrary to that strategy given the “exceptional situation” of the pandemic.

Arrimadas decided in early June, together with that small group of faithful, to support the sixth extension of the state of alarm, despite the fact that their votes were not necessary on that occasion, which caused some internal unrest. And with that small group he also made the determination, just two weeks ago, to strike Lorena Roldán as a candidate for the Generalitat and replace her with Carlos Carrizosa, without calling primaries. This style of decision-making has uncovered the thunder box among a sector of the party that complains that the new leader barely has the Executive Commission, which is the expanded Citizens’ management body, made up of 38 members, whose meetings They must be monthly. These critical voices recall that one of the Executive’s competencies is to endorse all the decisions of the Standing Committee, something that in the two cases mentioned above they believe that this rule has not been met.

In fact, when the Permanent Office announced in June that Ciudadanos was going to vote in favor of the sixth extension of the alarm, there were complaints on the Executive’s WhatsApp because many of its members learned of those agreements with the Pedro Sánchez Executive through that instant messaging forum or by the press. Some territorial leaders feared for the consequences that could bring them in their coalition agreements with the PP. Training sources apologized and blamed it on the rush of having to make quick decisions in the middle of the pandemic.

In the Permanent Committee there are neither the territorial leaders nor the four regional vice presidents – neither is the deputy mayor of the Madrid City Council, Begoña Villacís-. Arrimadas made her opposition to the ‘baronies’ clear when she presented her project and party model at the VI Extraordinary National Assembly which, after winning the primaries against Francisco Igea, ratified it last April in office.

The greatest anger, however, has been unleashed after it was learned that Arrimadas, along with his hard core, had decided to strike down Lorena Roldán and designate Carlos Carrizosa as a candidate for the Generalitat without calling primaries. The decision has been appealed by a group of regional deputies and it already has more than two hundred signatures of support, according to its promoters, who demand to annul that decision and call primaries, as they maintain that the Statutes establish. And if that was not enough, In the middle of the earthquake, the resignation of Jesus Galiano as president of the Guarantee Commission has been known, which is the body that has to resolve the conflict. In a letter that Galiano has sent to the appellants before leaving office, he explains that he has given the Citizens’ leadership 10 days to send the minutes of said meeting and confirm whether the party Executive met later to endorse the decision.

This small critical sector that has raised its voice against the change of candidate in which Catalonia, despite the fact that it says it does not want to make ‘noise’ now when considering that it is not the moment, denounces to elDiario.es that Arrimadas continues without assigning ‘portfolios’ -work areas- in the Executive as has been the tradition since the birth of the training. “With Rivera at least it was known who was responsible for Programs, Education, Training or Institutional Relations etc. Inés has no obligation to do so, according to the Statutes, but that distribution gave the party seriousness when knowing who was in charge of each negotiated, “says one of these critics, a veteran who believes that the new leader is concentrating” too much power in just a few. Almost worse than in Rivera’s time, “he says, referring to the Permanent Committee.

Within this small group, the figure of Edmundo Bal (Huelva, 1967) stands out, who has gained the trust of Arrimadas in these few months that the Jerez woman has been in office. Bal now is not only the deputy spokesperson for Ciudadanos in Congress, where Rivera’s resignation to pick up his act -who was the one who signed him- gave him the opportunity to regain the seat that the 10N did not achieve, but has been the main voice of the party during Arrimadas’ maternity leave. The state attorney has become an essential piece in all negotiations with the Government. After having closed the support to the state of alarm and the measures against the pandemic, he is now preparing to sit down to negotiate the “national emergency” budgets.

In that small group of influencers is Carlos Cuadrado (Barcelona 1968), formerly riverist staunch and ex-responsible for the finances of the party, of whose good state he boasts despite the drop in income that the formation has experienced when it lost 47 deputies in Congress. Cuadrado, who had not had a political profile until now – he even resigned his seat in the Senate that he won in the last elections on April 28 – has managed to be in this new stage one of the leaders with the most power within the Permanent Committee in a newly created position such as the first general secretary of the party. In addition to having been the main negotiator of the measures on the pandemic, Cuadrado will be part of the team appointed to address the talks with the Government on public accounts.

In the Sanhedrin is Marina Bravo (Zaragoza, 1978), who despite appearing in the organization chart in the highest position, such as the general secretary, does not have the political weight of her predecessor, José Manuel Villegas. Bravo maintains a very discreet profile since she is not a regular in the media. She is a personal friend of Arrimadas, with whom she shared a seat in the Parliament of Catalonia since 2015 when she was elected deputy for Barcelona until the departure of the Jerez woman to Madrid. Bravo continues to maintain her act as a regional deputy and her position as deputy spokesperson for the parliamentary group led by Carlos Carrizosa.

Arrimadas has also decided to incorporate José María Espejo-Saavedra into his hard core, whom he has appointed deputy assistant secretary, also placing him as secretary general of the parliamentary group in Congress. Like many other party leaders, Espejo-Saavedra also comes from the Parliament of Catalonia, where he became the first vice-presidency of the Table. The Catalan leader appeared in the general elections on 10N, but did not win a seat. Now it is one of the pillars of the diminished group of Arrimadas.

Another of those chosen by Arrimadas has been Joan Mesquida (Felanitx, Mallorca, 1962), an upstart of Citizens from the PSOE, under whose Government he came to hold the positions of director general of the Civil Guard and the National Police, in addition to that of Minister of Finance and Budgets in the Balearic Islands, among others. Mesquida left the socialist militancy in 2018 dissatisfied with the position of the party before the Catalan independence process and because of “the nationalist drift” that he observed in the leaders of his former formation in the Balearic Islands. A year later he was one of the star signings of Albert Rivera for the 28A elections together with Bal, Marcos de Quinto and Sara Giménez, as he did with José Ramón Bauzá, (PP) and Soraya Rodríguez (PSOE) for the European elections. Of all of them The only one who has slammed Arrimadas for now has been the businessman and former director of Coca-Cola, who left very angry at the change in strategy of the new leader. Mesquida announced in mid-March on his Twitter account that he suffers from cancer, which is why he has been forced to reduce his activity as Second Deputy Secretary of Citizens.

The Permanent Committee is completed by another woman, Melisa Rodríguez (London, United Kingdom, 1983), to whom Arrimadas has entrusted the national spokesperson for the Executive, a position that she already held in the provisional manager of the party. Although she was born in London, her origins are on the island of La Palma, so she feels Canarian and it is where she has spent her entire political career. In fact, in 2015 she was the party’s candidate for the Government of the Canary Islands but she failed. Shortly after, in the following generals she was elected deputy of Citizens for Santa Cruz de Tenerife. In the last elections held in November, Rodríguez lost her seat as a national deputy, but Arrimadas did not forget her. Their presence in the media is common after meetings of the party leadership.

The one who was left out of this hard core is Lorena Roldán, who was going to be the next candidate for the Generalitat, despite being the spokesperson in the Senate. Roldan is the only one that appears in the organization chart of the new Executive Commission in charge after being appointed by Arrimadas as deputy spokesperson for the party under the orders of Melisa Rodríguez.