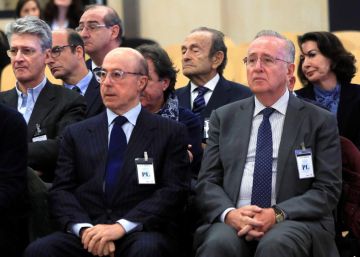 The trial for Pescanova bankruptcy He started on Monday at the National Court with 19 defendants and numerous witnesses and experts called to testify in court during the four months that it is scheduled to last. The defense of the former president of Pescanova, Manuel Fernández de Sousa, whom the Prosecutor's Office considers the leader of a plot that he intended to hide the millionaire group debt, requested during the previous issues the suspension of the trial and the return to the investigation phase.

The lawyer argued that the banks that granted loans to the company as of 2010 should be in the procedure for having profited from the interest they charged during those years. He also noted that, as the banks did not suffer damage and do not appear as an accusation, there can be no scam, one of the eight crimes that are charged to Fernández de Sousa: falsification of annual accounts, falsification of economic and financial information, fraud, rise of assets or money laundering, insolvency punishable, falsification in commercial document, use of relevant information and impediment of the actions of the higher body.

The head of the entity between 2009 and 2013 sit on the bench almost seven years after the bankruptcy of the company accused of hiding the debt to deceive investors, creditors and regulatory bodies. Then Pescanova was the visible head of a group of 151 companies with a presence in 25 countries and 11,000 employees. The real debt of the company became 2,000 million euros higher than officially declared. Pescanova was financed by issuing false invoices, as some executives declared during the investigation and the Prosecutor's Office believes. In addition to the 19 former directors, there are seven companies charged as legal entities. Among them, the auditor, BDO.

The anti-corruption prosecutor Juan Pavia rejected Fernández de Sousa’s lawyer’s request to suspend the trial and charge the banks that granted loans to the company. He assured, during the afternoon session of the trial, that Pescanova "cheated" on their financial situation, according to Europa Press. And he added that precisely because of this, for cheating the banks, the scam company is accused. In its provisional findings, the prosecutor states that the banks did not know the insolvency situation of Pescanova.

The defenses of several defendants also asked for the annulment of the order to open the oral trial because it includes a crime, that of punishable insolvency, which, they said, was not attributed to their clients during the investigation phase. Several lawyers, such as Fernando Fernández de Sousa, brother of the former president, argued that this accusation violates his right to judicial protection. This lawyer also claimed that his client was outside Spain at the time under investigation.

The fall of Pescanova has caused a good part of the Fernández de Sousa family to parade before the judge. The National Court opened a few days ago oral trial against the woman and two children from the former president of Pescanova, to whom he claims more than 14.2 million euros of bail. He accuses them of the crimes of money laundering and against the Public Treasury.