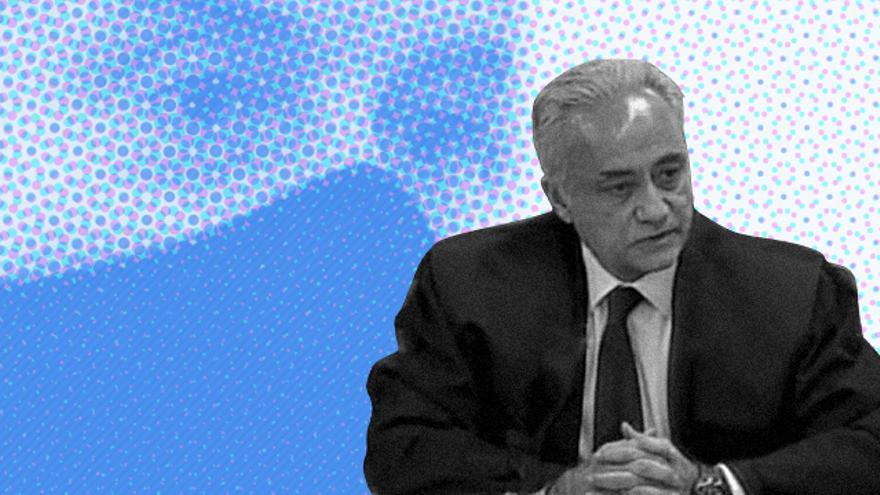 Of all the seismic movements that had their epicenter in the old National Court building, there is one that originated in that phrase by Jesús Santos Alonso. It was around noon on May 23, 1996, when the journalists who were waiting in the hall of the first floor realized that the lieutenant prosecutor was having a bitter drink: he had just requested unconditional imprisonment for General Enrique Rodríguez Galindo of the Civil Guard. for the murder of ETA members José Antonio Lasa and José Ignacio Zabala.

The explanation of his contrite expression and of what such a decision implied may be in the comment with which the current lawyer of the PP accompanied the announcement: “Those who try to present to the public opinion that in this procedure an institution is being investigated are wrong as the Civil Guard. Both the Prosecutor’s Office and the investigating judges of the National High Court have only words of gratitude and appreciation for the great and sacrificial work carried out against ETA terrorism. “

Those who frequented him then and continue to do so now believe that 25 years later the set has radically changed but not the protagonist. Coming from the Military Legal Corps, father of a large family and supernumerary member of Opus Dei, Jesús Santos is a partner in the prestigious, and expensive, Baker & Mckenzie law firm. Since 2012, he has been in and out of the National Court accompanied by clients such as the former president of BBVA Francisco González, the Russian magnate Mijail Friedman or the soccer player Neymar.

It has been, however, the fact of joining his career as a lawyer to the Popular Party that has ended with Jesús Santos in the situation that no lawyer in his position wants, that is known about him for what he does outside the courtroom . The twelve encounters with a close friend of Bárcenas, through the then active judge of the National Court Enrique López, have forced him to give a statement and talk about himself.

Out of conviction or out of devotion to the PP, Santos released a statement on Tuesday night in which he assured that no one in the party had “entrusted or authorized him to negotiate with Luis Bárcenas.” The next morning, being warned by Cadena SER that he could be violating the code of ethics, he clarified that he had informed his client of the aforementioned meetings.

The moment could not have been more inopportune for those contacts to transcend: Bárcenas had returned to speak of the offers that the Government of Rajoy made in exchange for his silence and in statements to The world extended these negotiations to two people “closely linked” to the current leadership of the PP.

“The show”, as judges, prosecutors and lawyers consulted agree in defining what happened, resides above all in the participation of the then-practicing magistrate and current head of Justice of the PP, Enrique López, the same one who resisted being removed from the court that was going to judge the political formation in Gürtel and Caja B, which was finally prevented by his colleagues from the Criminal Chamber by accepting his challenge for “an appearance of lack of impartiality.”

But at the same time, it puts back on the table an old normality that seems settled in Spanish justice, with greater or less resignation depending on who you ask: the figure of the former prosecutor or the former judge working for posh law firms and rates available only to large companies or wealthy individuals. Almost everyone in public says that their experience on the other side revalues ​​their legal knowledge. Almost no one in private denies that his minutes cost what his contacts weigh.

Jesús Santos, like many others who changed their toga, can be seen eating in restaurants in the noble area of ​​Madrid with active commissioners or waiting in the hall of the Anticorruption Prosecutor’s Office for his former colleagues to receive him, now who are the prosecutors of the cases of their famous clients.

In his defense, it could be said that it is the usual practice of any lawyer. But do they receive the same treatment from judges and prosecutors? “Of course, in the National Court, no. Santos was a heavyweight in that house,” says one of the lawyers of the popular prosecution in box B, the group of lawyers against whom the PP defender charged in the second session for having, according to him, “a spurious, political purpose” in the cause.

A former politician with legal training, Francisco Martínez, who knows behind the scenes of power as number two in the Interior, also knows what a lawyer with a past in the National Court is worth. In one of the messages on his phone, the accused of coordinating Operation Kitchen from his position as Secretary of State for Security, states: “There are people with a very close relationship with the head of the Court (example, Zoido). There should also be people with the capacity to reach the prosecutors who are OBSESSED with this piece, out of revenge, for the sake of notoriety (Jesús Santos was the preparer for prosecutor Stampa) “.

With a reputation for being a hard worker and rigorous during his period in the Prosecutor’s Office, Jesús Santos has always done well with the Popular Party. When Aznar governed, Ignacio Gordillo, now with his own office, was appointed number two of the National Court against whom everyone believed that by seniority he would hold that position. Those were the times of another member of Opus Dei in the State Attorney General’s Office, Jesús Cardenal, to whom the decision is attributed. Santos had arrived at the National Court in 1989 to occupy the place left by Carmen Tagle, riddled with bullets by the ETA serial killer Henri Parot.

One of the leaders of the PP that Bárcenas accuses of collecting bonuses, Ángel Acebes, appointed Santos a liaison judge in Italy from his position as Minister of Justice in a Royal Decree published in the Official State Gazette on March 1, 2004, in full electoral campaign. The liaison judge in Rome is one of those positions reserved for magistrates those who want to reward or move away from their occupation in Madrid, with little work, good pay and the opportunity to live in a large European capital for a time. Santos was abruptly dismissed in September 2011 by the socialist minister Francisco Caamaño. With the victory of the PP in 2012, his position in Italy would be occupied by Manuel García-Castellón, whom the Aznar Executive had previously sent to Paris.

Back, Santos would no longer return to his place in the Audiencia Nacional and would be booked by Baker & McKenzie. He began to serve as a lawyer to the PP soon after. In December 2013, Judge Pablo Ruz got tired of the party not sending him the required documentation and ordered the search of the Genoa headquarters. There appeared the contract as a lawyer for Santos, who appeared at the party’s facilities identifying himself as a lawyer for the formation. The lawyer had tried to appear in the case as a popular accusation, but Ruz, who had expelled the PP from Gürtel for acting as defender of Bárcenas, rejected it.

The general secretary of the PP, María Dolores de Cospedal, had full confidence in him. So much so that someone with the Santos minutes acted as defense attorney for the party manager in Castilla-La Mancha José Ángel Cañas in a piece derived from box B: the alleged payment of 200,000 euros by Sacyr to the regional campaign of Cospedal in 2007 to change of a garbage contract. The Provincial Court of Toledo later filed the case.

It has not been the only joy that Santos has brought to the PP. With the invaluable collaboration of Luis Bárcenas, who withdrew the accusation for the destruction of the hard drives that was left in Genoa, the lawyer and his team at Baker & Mckenzie prevented the Popular Party from becoming the first political party convicted in a criminal proceeding as legal person, after the legal reform that makes it possible.

Those who worked with Santos in the Administration of Justice coincide in speaking well of him, whether or not they belong to his ideological spectrum. An old judge says that “Jesus is a good person, in the Azorín sense.” Another goes further and links that way of being to his participation in the meetings with Bárcenas’s friend: “I’m sure he approached Bárcenas or the emissary for a question of humanity. What was he going to negotiate? There was no possibility” .

Last Tuesday, at the start of the view of box B, Jesús Santos snapped at the popular accusations that they want to “bring former presidents, general secretaries and senior PP officials to the wear and tear of the political adversary” and that with their attitude they only contribute to the “media circus.” Neither Aznar, nor Rajoy, nor any of the other leaders is accused. Santos defends the PP only against the accusation of a subsidiary civil liable for the crimes committed by Bárcenas when paying with black money for the Genoa reform.

The recipients of that comment by Santos three days ago, some veterans of the First Era trial and of Bárcenas’ computers, demanded “respect.” After that first trial of the beginnings of Gürtel in which they met, the PP was convicted as civilly responsible for the corruption of the plot in the municipalities of Majadahonda and Pozuelo and had to pay 245,000 euros. The ruling referred to the irregular financing of the party for almost two decades. The next chapter was called “motion of no confidence” and with it ended the first season.