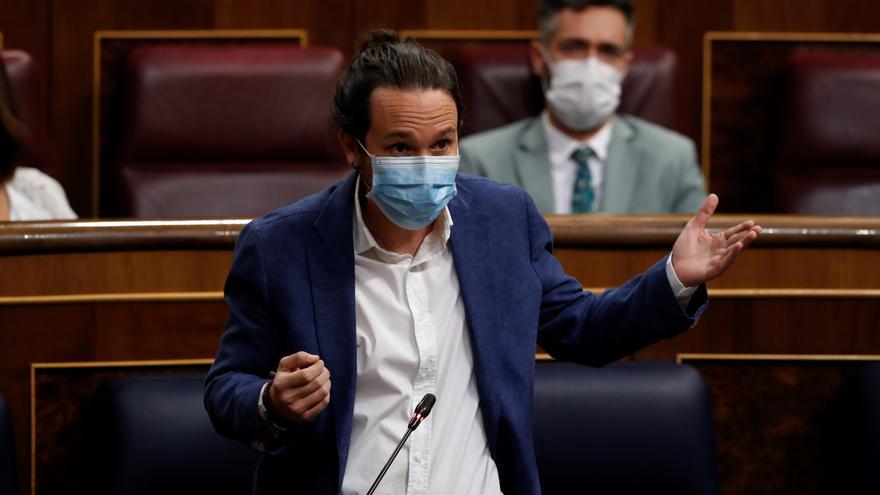 The one who was responsible for the legal team of Podemos José Manuel Calvente has indicated this Thursday before the judge of the National Court Manuel García-Castellón that the leadership of Podemos, specifically Pablo Iglesias, Irene Montero and Juanma del Olmo, used the cause of the Theft of Dina Bousselham’s mobile as a strategy to denounce an operation of the State sewers ahead of the April 2019 elections.

This statement has been produced in the framework of separate piece number 10, called ‘Dina’, of the macrocause ‘Tándem’, in which the theft of Dina Bousselham’s mobile phone in 2015 is investigated when she was an advisor to the leader of Podemos, Pablo Iglesias, and the subsequent dissemination of private messages by different media.

Sources consulted by Europa Press who have attended the interrogation have also explained that the lawyer fired by Podemos – who has responded to all parties for about three hours – would have pointed directly to the leadership of the party, pointing to its leader, Pablo Iglesias, to the current Minister of Equality, Irene Montero, and to the head of communication Juanma del Olmo, as the architects of the strategy to use the theft of Bousselham’s phone to denounce this alleged operation of the State sewers against Podemos.

The phone card was found in a search at the house of the controversial commissioner, José Manuel Villarejo, accused of a long list of crimes and a central figure in the political brigade, a para-police force that carried out tasks to attack the rivals of the PP and destroy evidence of the so-called party box B.

During his statement, Calvente has related alleged threats and pressure from the Podemos environment, and Judge Manuel García-Castellón has requested that testimony be deduced so that the Prosecutor’s Office investigates these alleged threats and, if necessary, offers him protection. Calvente would have pointed out that in the environment of Podemos there would be very violent people, and he has even spoken of a ‘kale borroka’ or guerrilla.

On the other hand, and according to these same sources, Calvente had been ratified in his version of the chats of the legal team, confirming that they inferred a relationship between the lawyer of Podemos Marta Flor and one of the prosecutors in the case, Ignacio Stampa. The lawyer’s thesis is that this alleged relationship would have benefited the political party by prosecuting the phone in the case of the theft. The truth is that of the long battery of proceedings that Podemos requested in relation to this matter, the prosecutor rejected practically all of them.

Pablo Iglesias’ lawyer, Raúl Maíllo, who has also attended Calvente’s interrogation, has explained to Europa Press that he “has not provided any proof” of what he has maintained and “has based his statement on mere hypotheses and opinions.”

In fact, he points out that when asked if the ‘Dina’ case was a montage known to the Podemos management, Calvente would not even have dared to affirm that in the first person and would have said that “that’s what they told him, without indicate who told you “. In addition, they have stressed that whoever was a lawyer for the formation is a person “with a clear animosity towards Podemos.”

On the other hand, sources from the Iglesias party have explained that Calvente’s statement has passed like the one he made before the Investigative Court number 42 in Madrid, without evidence and with statements “based on rumors.”

Calvente was called to testify as a witness by García-Castellón in the framework of piece 10 after it was published in El Confidencial and El Mundo, part of a conversation between Podemos lawyers in which it was revealed that Calvente questioned the legal strategy undertaken by the party following the opening of the piece.

Specifically, and as Calvente himself explained prior to his appearance on Thursday, he warned in the match that the former adviser had taken screenshots of conversations that months later, and after the theft of the terminal, appeared published in the media. communication, so at that time it could not be assured that Podemos had been a victim of the “sewers”.

Calvente was fired from Podemos in December 2019 after the accusation of Marta Flor, one of the party’s lawyers and also a representative of Bousselham – and until a few weeks ago of Pablo Iglesias – in part 10 of the ‘Villarejo case’, for an alleged sexual and workplace harassment that has never been proven. The lawyer relates his departure from the party to his investigation into possible accounting irregularities in the party. Most of the lawyer’s accusations have been dismissed by the Prosecutor’s Office, which nevertheless has asked to inquire into the contracts of Podemos with the consulting firm Neurona.