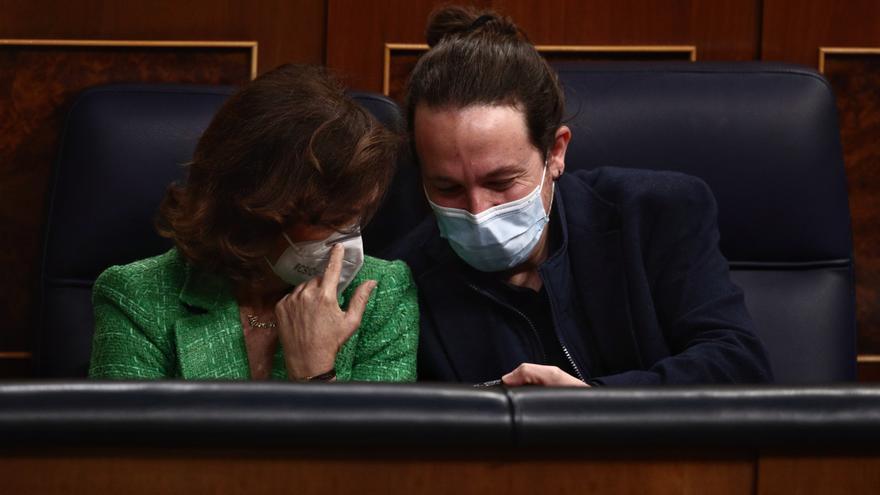 Election campaigns raise the heart rate of politicians to levels that are very harmful to health. In times of tension such as those in which we live, elected officials compete in a race in which it seems that the one who releases the fattest has the advantage. The media make their contribution running to echo the most untimely statements. A good chunk of readers contribute by giving more traffic to those gunpowder-laden articles. But the greatest responsibility is in the point that originates this process: the politicians who decide that you have to start each day with a good kick to the opponent’s crotch.

The hot debate in recent days revolves around the concept of “democratic normality” based on Pablo Iglesias’ statements to the newspaper ARA. “In Spain, there is no situation of full democratic normality”, he said, because the leaders of the two parties that govern Catalonia are in prison (Oriol Junqueras) and in Brussels (Carles Puigdemont). “These people haven’t planted bombs, they haven’t shot anyone.” Nor has Rajoy killed anyone and United We can justly demand that he be held responsible for the corruption produced during his years in office. Governments and politicians are bound by the law. If they don’t, there must be consequences.

Where have we heard that Spanish democracy does not measure up, is dying or has already perished? In many places. Few have distinguished themselves as much as the Madrid president. Isabel Díaz Ayuso sees Venezuelas everywhere. “Spain is on the way to being a democracy in name only,” he said in November. They are “destroying fundamental rights”. Not harming or damaging. Sweeping. It’s not that we’re going bad, it’s that “We are on the way to totalitarianism.” It is clear that Ayuso only knows about totalitarianism what he has read to Jiménez Losantos.

For the Catalan independentistas, Spain is no longer a democracy. No more. We don’t even talk about Vox anymore. The extreme right maintains that the government is part of a “globalist” conspiracy and is dedicated to killing its citizens.

The difference with Iglesias is that the leader of United We Can is vice president of the Government. The parties that are in a government do not usually have much future in Europe if they affirm that the country is an unmitigated disaster. By definition, it is a demobilizing mechanism for its voters. If you have bet so much to be in the Executive as a second game, and we all know that it was a strategic bet by Iglesias, you have to defend to the death that things are changing, that what previously seemed dark, now begins to clarify.

Iglesias has defended on numerous occasions with concrete examples the impact of the presence of the United We Can members in the Cabinet. It’s just that he can’t resist the temptation to act as a long-term political analyst with the intention of highlighting the shortcomings of the political system. And then you can’t complain that the second stands out more than the first.

Podemos cannot present itself in the next national campaign as if it were an opposition party, because many of its voters will think that it was a mistake to join the government.

In the game, nothing is done without a video. The one issued these days is not so shabby like the one made by superimposing the soundtrack of the ‘Narcos’ series on a montage with images of the monarchy that could have even been improved by a student. Even so, the question a Podemos supporter should ask may be: what are the ministers doing to keep this going?

The opinion of the vice president has caused stupor in the ministers of the PSOE. It is common to read socialist criticisms of Iglesias and other leaders of Podemos for revealing in public the internal differences between the two parties. It is quite hypocritical. The socialist ministers also speak of the subject, but they do so anonymously. “Pablo Iglesias is not in the government actionHe has no management, he does nothing, and every day he is forced to go further and make more scandalous statements to attract attention, “they have told El Mundo.

What a good vibes. At least, the leaders of Podemos do not go around saying that Pedro Sánchez spends the day looking in the mirror or that he does not move a foot without the authorization of Iván Redondo. His criticisms are not so personal, the kind that create a bad feeling that is saved for the next onslaught.

Socialists are not so eloquent when asked about the two very recent occasions on which the PSOE has made beds for its allies. Happened with the socialist proposal for an equal treatment law in which they olympically ignored the Minister of Equality. This week, they repeated the move with a note with a couple of paragraphs sent by Moncloa at nine o’clock at night announcing the project to eliminate prison sentences for crimes of opinion. They did it when they found out that Podemos was going to present a bill with a very similar intention. Like taking an exam bragging that you have studied a lot when the questions have been passed to you the day before.

The coincidence with the elections in Catalonia is a factor that has aggravated this confrontation. It is an inevitable fact that it was known that it was going to occur. The Catalan scenario has not lost its ability to condition Spanish policy and to keep it with a high fever without anyone having invented drugs that allow the patient to heal. That is the only effective victory that the independentistas have achieved. With that they are as far from independence as the first day, but it is obvious that the idea, which was not based on anything, that the conflict had passed into the freezer has been contradicted by reality.

The most intelligent response to the mess created by the words of Iglesias was given on Wednesday by the Minister of Labor who supported that message through the facts, not hitting her chest. “Look if it is so evident what the Government thinks that yesterday there was an initiative to correct this democratic anomaly,” said Yolanda Díaz in reference to the future imprisonment of rapper Pablo Hasel. If the PSOE and Podemos want to prevent a citizen from ending up in prison for an alleged crime of opinion, they are changing something that currently appears in the laws and that will make democracy more complete, as so many say now.

What Díaz says should be obvious to any politician in government. What matters is not what you think about a greater or lesser injustice, but what you do so that it does not happen again. Everything else is text comment.