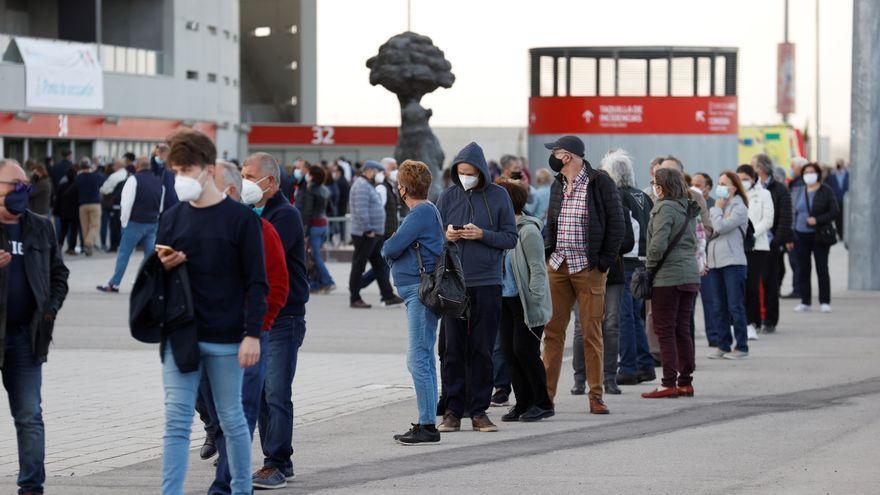 The extinction of the vaccine fields is near. The large vaccination centers opened in Spain half a year ago to immunize the population as quickly as possible make their last services. Many have opened up to walk-in vaccinations to make it easier for the laggards. Its raison d’être no longer makes sense when vaccination coverage almost reaches 75%. Nearly six out of ten teens, the last major group in the strategy, already have a full guideline. With this evolution, several communities plan to lock down stadiums and sports centers metamorphosed by the urgency of a global pandemic next month.

The Wanda Metropolitano, in Madrid, has already been dismantled for patients. The Atlético de Madrid stadium has exchanged vials and gauze for football fans after inoculating 577,000 people at its facilities since the end of March. The large centers, said the Basque Minister of Health, “have been a great success” but “involve a huge logistical and organizational effort “and are no longer necessary. Another example: the sports center of the Public University of Navarra lowers the blind next Thursday after six months.

The Valencian Community will keep open its extraordinary points, some 133 smaller ones, until October in a last call to the undecided or fearful. The same strategy is being followed by Galicia, which allows first doses to be given until September 19 without having to request it beforehand. On the first day, 8,000 of the 180,000 who had not come to receive the injection showed up. Extraordinary centers continue to operate in Andalusia but at a lower rate, as in all territories. “There is no intention of closing now, but by sheer logic it is going to be gradually closing down,” they point out from the Andalusian Government. The next step in the vaccination strategy, additional doses to immunosuppressed patients, are already being administered entirely in hospitals.

With the perspective that time gives, epidemiologists and vaccinologists appreciate positive and negative points in the operation of these large spaces. “When looking back we must bear in mind that we were at war”, prologue Inmaculada Cuesta, representative of the General Nursing Council, member of the Nursing and Vaccine Association (ANENVAC) and signatory of the national vaccination strategy.

Experts agree that the vaccinodromes have allowed “great vaccine coverage in a short space of time.” “It was the objective to control the pandemic. Without so many vaccinated people, I don’t know what would have happened in the fifth wave,” says Cuesta, who circumscribes decisions to an extreme situation with many lives at stake.

Adrián Aguinagalde, director of the Public Health Observatory of Cantabria, admits that “it has been difficult to start up the vaccination fields and maintain the mixed model”, that is, the health centers and public hospitals operating at the same time. “They could have been useful because they accelerated but they have required extraordinary resources that had to be withdrawn from other healthcare providers and Primary Care has suffered significant stress,” he contrasts.

The doctor distinguishes two models: the Bismarck, raised by Germany or the United States – with the administration as mere manager -; and the Beverigde, in which Spain or the United Kingdom are framed and which stands out for the predominant role of the State. “It is possible that they wanted to imitate a different model to that stated by the National Health System,” he slides, given that “there is a publicly owned network that is an anomaly in the rest of the world.”

In communities like Madrid, the massive inoculation –with very long queues at the Nurse Isabel Zendal hospital– ended up leaving health centers without vaccines. All vaccination points they had to stop the first doses and the second ones began to be put a few days late. The Government of Isabel Díaz Ayuso attributed the stoppage to the lack of serum and the Executive of Pedro Sánchez reproached him for poor organization in the supply.

The overtime and shifts doubled by the nursing staff have been a fundamental piece. “The authorities designed the plans but it has gone ahead because the nurses have been on site,” recalls Cuesta. Job boards have been left to zero in the pandemic and there are difficulties in hiring in many autonomous communities that continue to have deficits.

Then other factors operate. For example, how the proximity of health centers can “engage the patient” in other ways and promote greater adherence to the vaccine. “At the point we are at, it will be very important because the people who have not yet been vaccinated are, beyond the fact that they have not been able to, because they have doubts, fears or are reluctant. Normally these people need time, dialogue, solve doubts with a person formed … That is not possible in the vaccine fields, “says Cuesta, who discards that the conditioning of the vaccine stations has been part of the” propaganda “of certain autonomous communities.

There is also the advantage of physical proximity that encourages the patient’s autonomy to move around. In Madrid, those over 80 years of age were fully inoculated at their health center. However, later age groups had to go to large spaces sometimes far from their homes, a handicap for the elderly, but also for the sick. Large dependents were vaccinated at their homes.

74.1% of the Spanish population is vaccinated with the complete regimen. The sum of injected doses in all the territories amounts to more than 68.2 million. With the gradual closure of the vaccine fields, the pandemic closes another stage.