Karim Benzema and Mohamed Salah will fight the last match for the Ballon d'Or at the Stade de France. The French striker for Real Madrid and the Egyptian striker for Liverpool monopolize almost all eyes in the hours leading up to the Champions League final, which will serve for the two favorites in the race to succeed Leo Messi in the record of individual recognition more prized in football make their final arguments in a sideshow compared to the colossal collective reward at stake, but no less in an industry that thrives on its superheroes.

After an exhausting season in which Messi and Cristiano Ronaldo, who have alternated on the throne since 2008 -with the sole exception of the distinction achieved by Luka Modric in 2018-, soon lost their options while the candidacies of Robert Lewandowski or Kylian Mbappé, the Champions has served to carry out the final screening and will officiate as judge of a lawsuit in which only two litigants appear: the 'killer' of Real Madrid and the pharaoh of Liverpool.

The numbers denote the enormous influence that one and the other have had in the successful transit of the two best squads of the course that will expire when the Frenchman Clément Turpin decrees the end of the stake in Saint-Denis. 44 goals and 15 assists in 45 games are Benzema's impressive endorsement in a campaign in which Bron's striker has led Real Madrid to their twelfth Spanish Super Cup, catapulted the Whites to their thirty-fifth League title and He has brought them back to the decisive match in their fetish competition, recording 15 goals and adding two goal assists in a tournament that already has him as their third all-time top scorer with 86 goals, the same ones that Lewandowski has sealed and only surpassed by the extraterrestrials Cristiano (140) and Messi (125).

Benzema's punch grew exponentially in the knockout phase. After closing the group stage with four goals in his locker, a hat-trick by the Lyon native at the Santiago Bernabéu saw Real Madrid dismount PSG in the round of 16. That astonishing performance was followed by another no less astonishing one at Stamford Bridge, where he put Chelsea on the ropes with his second successive hat-trick. The 'blues' came back to life in the second leg but, after Rodrygo came to Real Madrid's rescue in the last leg of the match, the Lyon native shrouded the defending champion with a goal in extra time. Manchester City was his next victim in the semifinals: two goals at the Etihad to lead the resistance of Real Madrid, to which he added the goal from the penalty spot that unbalanced the crossing in that infarct extra time that hosted the Paseo de the Castilian. 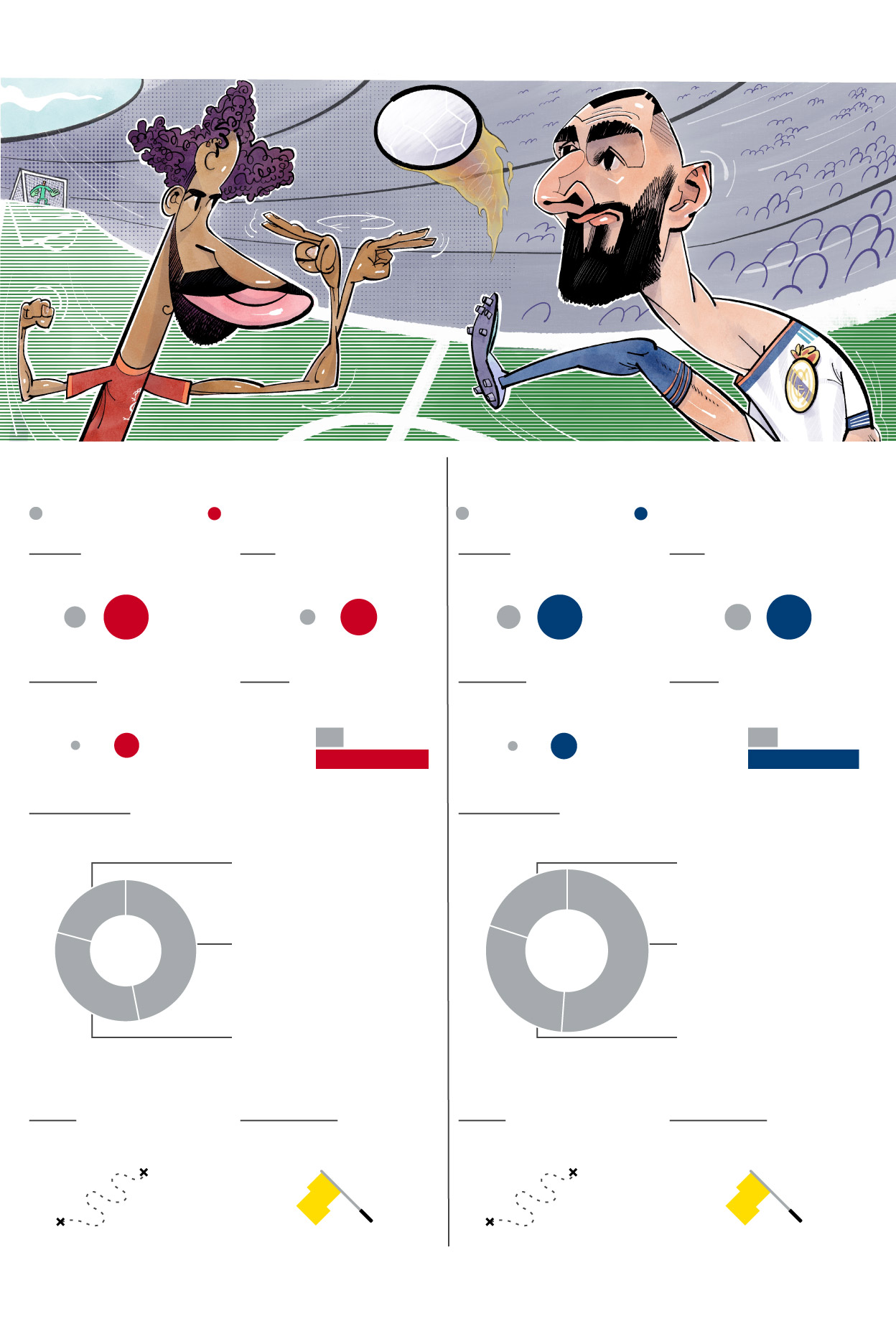 An offensive torrent that has Benzema threatening the record of 17 goals set by Cristiano Ronaldo in the 2013-14 Champions League. Without his nose and unquestionable leadership, that chain of comebacks that has led Real Madrid to Paris, where the Frenchman will try to give the last kidney blow by beating Liverpool, would be inexplicable. A team against which he counts four notches on his revolver, the most outstanding of which was the one that opened the 'thirteenth' lock four years ago at the kyiv Olympics.

That quote is the main thorn in Salah's career. The Egyptian had to leave that final in the 30th minute due to a shoulder injury caused in a dispute with Sergio Ramos. He left in tears from a game in which he was being Liverpool's most dangerous footballer, but now he has the chance to make amends.

Like Benzema, the African has played a leading role in the Reds' great campaign: champions of the FA Cup and the Carabao Cup, runners-up in a Premier League in which they fought until the last breath to snatch the title from Manchester City and brand new Champions League finalists. 31 goals and 15 assists are the balance with which Salah arrives in Paris. Eight of those goals have been signed by the former Roma in a Champions League that has him as the fourth highest scorer of this edition. He is the outfield footballer who has played the most minutes defending the cause of the British team in the star tournament this year, the one who has made the most shots, the one who has made the most dribbles and also the one who has traveled the most kilometers.

An outstanding performance in the final that propelled Jürgen Klopp's team to the 'orejona' could make Salah the second African footballer to fasten the Ballon d'Or, 27 years after Liberian George Weah achieved it. Another exercise of authority by Benzema will return the title to France, a country that has not seen one of its own invest since Zinedine Zidane won it in 1998. The fight is on.