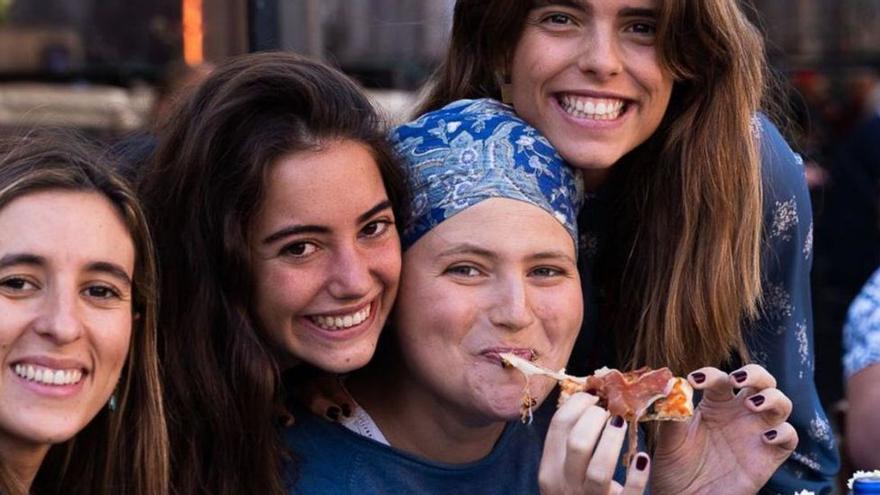 TO Marta Fernandez SerranoIn mid-March 2018, a doctor told her “parostal osteosarcoma,” just two words that would change her life. He had less than two months left to turn 20. Marta was given a blow that one does not come out of and she responded with unwavering faith. “Dance and stop stories”, he would say years later before a camera in a reflection on bone cancer that ended up extinguishing the life of the young woman from Oviedo last Saturday at the age of 23. Those words, spoken with integrity and a smile under the scarf that covered his head, now shake the country and social networks, and hang in temples and educational centers throughout Spain in the form of posters. Marta left, but Hakuna, the Christian youth organization to which she belonged, has not let her voice fade.

“It’s life, it’s not such a big deal,” say his friends that he responded when someone showed compassion to him, when he saw that his suffering was seeping into others. Marta Fernández Serrano, says her brother Ignacio, “was always special”. She clarifies that she does not do it to show off, but because she “never lost heart.” She was, however, an ordinary girl, who made “the ordinary something extraordinary.” During the last years he was an example for many within the organization, but also for his family and friends. Marta was the oldest of four siblings. Her family feels the natural pain of a loss that is not – because of course Marta did not have to leave when she was only 23 years old – but they say they are “at peace.”

This Monday, San Juan el Real became a celebration of his life. Young people from Madrid, Seville, Bilbao came to the Ensanche Cathedral … from all the cities in which the young woman from Oviedo had made friends. The parish priest of San Juan, Javier Suarez, He claimed to have officiated the most exciting funeral of his life. The friends of Fernández Serrano and members of Hakuna filled the basilica with songs. It will not be the only celebration for Marta, there will also be funerals in Pamplona and Madrid.

The young woman, who had previously passed through Meres and Peñamayor, was studying bilingual economics in Pamplona when she was diagnosed with a stranger Cancer of especially aggressive bones. The first treatment worked and Marta was cured as she made it through the race year by year. But it didn’t take long for the disease to return, to reproduce and to become unstoppable in the form of metastasis. Despite the severe pain caused by the tumors and the series of operations she had to undergo, the young woman from Oviedo continued to perform her little miracles.

This year he had planned a trip to Rome with Hakuna, a visit to the Vatican and, to try and with blind faith, he decided to send a letter to Pope Francis. On May 4, 2013, his 15th birthday, she had met him in the Holy City almost by chance. Then they say that the newly appointed Pontiff told him: “Pray for me and I will pray for you.” Marta reminded Francisco of that anecdote in her letter. While in the hospital, she received a call from the Vatican to offer her an audience with the Pope, but a few days later, Marta had to undergo emergency heart surgery. “She was discharged at six on Tuesday and on Wednesday morning she was meeting with the Pope in Rome,” recalls the second of the young woman’s brothers. The Pontiff and the young woman from Oviedo approached each other with the same promise, each would take care of the other “in prayer” and she left him a Virgin of Hakuna as a souvenir. “That visit was a push of faith for her, it helped her a lot to stay strong,” they summarized from the association.

The last months of his life were a frenzy. Marta moved to live in a house of the religious organization in Madrid and turned to some of the projects while “serving as an inspiration for others”, as the Christian youth group affirmed yesterday. This Sunday a mass and a party will be celebrated in her honor in the Cifuentes convent, one of the properties that the religious organization was reforming as its headquarters and in which the young woman from Oviedo was especially committed.

When it got worse, he moved to HUCA, where he spent the last weeks with his family. Marta’s many friends in Oviedo sheltered both the young woman and her brothers during the last days. Despite the pain, she was always “whole” and confident. “I have never seen anything like my sister’s faith,” summed up her brother Ignacio. “It hurts us, but we have a brutal peace, we feel supported, we know that he is in heaven, we know that he is fine,” he added.

“We will never have absolute control over our situations. You dance and let yourself go, you let yourself be done and that’s it. Dance and stop all that nonsense that is not important ”, that was Marta’s analysis of what a terminal illness is at age 20. That was his lesson to the world.