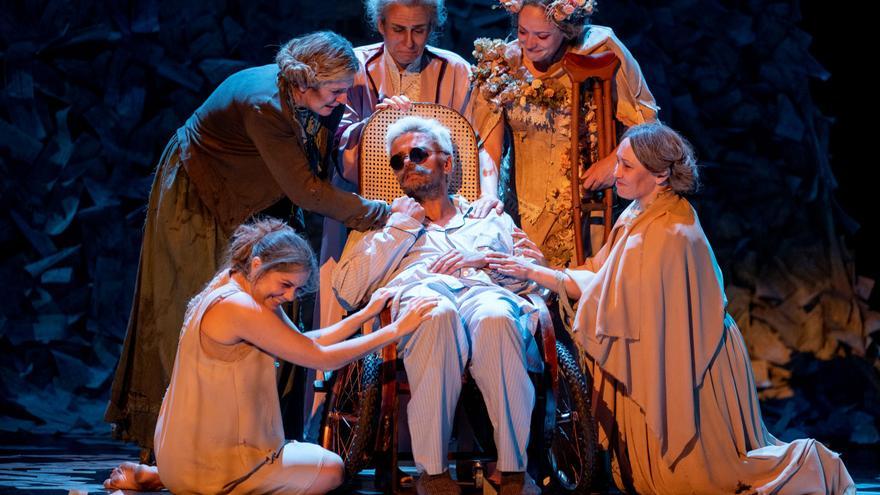 He Pérez Galdós Theater of the capital of Gran Canaria opens its season with the premiere of the stage production ‘The last trip of Galdós’, which arrives on its stage on October 8, 9 and 10 (performances at 8:30 p.m.) Directed by Mario Vega and inspiring text by the Madrid playwrights Laila Ripoll and Mariano Llorente.

The aforementioned show, co-produced by Unahoramenos and the Pérez Galdós Theater, is sponsored by the Cabildo de Gran Canaria and the Las Palmas de Gran Canaria City Council (patrons of the Auditorio y Teatro Foundation), to which the Government of the Canary Islands collaborates. and the City Council of Agüimes.

This morning the aforementioned montage was presented to the media in a ceremony attended by the mayor of Las Palmas de Gran Canaria and president of the Auditorio Teatro Foundation, Augusto Hidalgo, the president of the Theater. Cabildo Gran Canaria, Antonio Morales, the Deputy Minister of Culture of the Government of the Canary Islands, Juan Márquez, the mayor of Agüimes, Óscar Hernández, the general director of the Auditorium and Theater Foundation of Las Palmas de Gran Canaria, Tilman Kuttenkeuler and Mario Vega, director of the play. In addition, the event was attended by the Councilor for Culture of the capital city council, Encarna Galván, and the director of the Pérez Galdós House-Museum, Victoria Galván.

Augusto Hidalgo defined ‘The last journey of Galdós’ as “a daring and unusual bet, which will allow spectators to visit the striking and spectacular forum that bears the name of Galdós. Pérez Galdós himself would have attended as an audience to later make his pertinent criticism as he did in the newspapers of his time. ”

Likewise, the president of the Gran Canaria Cabildo, Antonio Morales, valued the work carried out in these years by the Unahoramenos production company directed by Mario Vega, of whom he said that “he is one of the most important theater directors and producers on the scene in the Canary Islands. at this time, whose state projection is also beyond doubt. ” Morales concluded by thanking Vega “for the enormous risk that in recent years he has assumed for projecting theater in our land.”

The Deputy Minister of Culture of the Government of the Canary Islands, Juan Márquez, made an appeal to citizens to lose their fear of attending cultural events in the difficult situation that the sector is experiencing. “I encourage you to approach the cultural activities that are being carried out in the Canary Islands in a safe way, because we have protocols and levels of self-demand in the sector, which are guaranteeing not only all the measures that Health requires, but other complementary measures that they reinforce the protocols. ”

The mayor of Agüimes, Óscar Hernández, announced that ‘The last trip of Galdós’ will rise to the tables of the Municipality’s Auditorium in the next South Three Continents Theater Festival, and positively valued “the involvement of public administrations in this production with the that the aspiration of cultural development of Gran Canaria society is partly recovered in this time of uncertainty “.

For his part, the general director of the Las Palmas de Gran Canaria Auditorium and Theater Foundation, Tilman Kuttenkeuler, expressed “his great joy at the return of the public to the theater. Activity and culture returns to their homes after too long a pause “, He said.

Finally, Mario Vega, director of the work, pointed out that the montage “takes a journey through the delusions of a very old Galdós on the brink of death, whose last minutes he shares with the spirits of the women who marked his life, from his mother Dolores to his cousin Sisita, passing through Lorenza Cobián, mother of his only daughter, Emilia Pardo Bazán, Concha Morell and Francisco, who is on her last trip with him. ”

‘The Last Journey of Galdós’ is a compelling and moving human portrait that addresses, from fiction, the last days of an elderly Galdós who seeks to reconcile with the main women who passed through his hectic life.

Performed by a choral cast of actors and actresses made up of Lili Quintana (Dolores), Ruth Sánchez (Emilia), Marta Viera (Conchita), Maday Méndez (Lorenza), Alicia Ramos (Sisita), José Luis Massó (El Señor Cirspecto) and Rubén Darío (Benito Pérez Galdós), ‘The last trip of Galdós’ closes the trilogy proposed since 2018 by the so-called ‘Galdós Laboratory’, a stage experimentation project that in the next three years will be re-founded with a more international dimension to connect, from Gran Canaria, to theaters and scenic spaces in Europe (France), Africa (Burkina Faso) and Latin America (Colombia).

In this new production of the aforementioned Galdosian project framed in the Galdosian Biennium promoted by the Cabildo of Gran Canaria, the Pérez Galdós Theater space takes on great relevance, reaching a direct impact on the staging of the work, which takes place in five different places of the capital coliseum. Thus, the audience will be divided into five groups enjoying a comprehensive immersive theater experience. During the first act, one will go to the Saint-Saëns room, another to the henhouse area, a third to the rehearsal room, a fourth to the theater chácena and a fifth to the pit where the orchestra is usually housed. In each of them you will enjoy a theatrical piece and, finally, in the second act, end up sitting in the stalls to contemplate the outcome of the play.

The magnetic power of memory

The playwrights Laila Ripoll and Mariano Llorente, both founders of the Micomicón company and awarded in 2015 with the National Prize for Dramatic Literature and the Max Prize for Best Theatrical Authorship for their work ‘El Triangle Azul’, approach with extreme delicacy in this text the imaginary complex of the Galdosian universe in its last transit, surrounded by characters who claim a space at his side at the last moment and in which he himself is unable to remember if they died already or are still alive.

In that definitive trip, Don Benito will be assaulted in his final stretch by the echoes of people and characters whom he loved, whom he rejected, whom he forgot … Images crowd his mind, although he is no longer the owner you are welcome. From the character writer Emilia Pardo Bazán and Lorenza Cobián -mother of his only daughter-, to the Jewish actress Concha Morell, through his mother, Doña Dolores, or his pizpireta cousin Sisita, his first recognized love of youth who He would score while studying Baccalaureate on the island.

Galdós, who never married, recognized María as his own daughter, born from his relationship with the model Lorenza Cobián between 1879 and 1891, who ended up committing suicide depressed by hanging herself in the dungeon of the Civil Government of Madrid. She lived a passionate story with the writer Emilia Pardo Bazán and with the actress Concha Morell, who were separated by 21 years of age. All of them transit in this enthusiastic fresco about the magnetic power of memory and forgiveness. The sublime and notorious Galdós unravels to become a sick and weakened human being, who is heading his days towards the moment when the equations that will lead him to the epiphanic end begin to unfold. It will be the last trip for Galdós. Around 1915, four years before his death at the age of 76, Galdós wrote that his world was fading into darkness.

In addition to his emotional distress and the fragility of his old body, in this role, the reproaches of women who return from beyond their conscience, to claim the capital of love that could have been and was not, are added. Prostrate in his chair, Galdós, “an old man who smells of urine”, as he admits during a dialogue with Concha Morell, remembers that death has a prodigious memory: He does not forget anyone. The storm drags him into the abyss, but not into nothingness. What cannot be deserved by the justification of his successes and failures, stands before him as a Whole. It is that moment when he is alone and has to face his most authentic self. In the last scene of the play, Pérez Galdós tells Emilia Pardo Bazán: “That’s it, Emilia, that’s it … Tell God to come in.”

The production’s creative team includes Iván Negrín in the lighting, Nauzet Afonso in the costume design and characterization and Carlos Oramas, in the musical arrangements with his romantic 19th-century guitar and theorbo made around Fernando’s Andante Largo Opus. 5 Sor and fragments of Giovanni Girolamo Kapsberger.

The scenography also designed by Mario Vega, however simple, does not leave anyone indifferent in this co-production created with the help of the Pérez Galdós Theater.

The production team had to commission the printing of the 25,000 fire-retardant telegrams that had to be transferred from Germany to the island. They symbolize the envy and intolerance of all those who asked the Swedish Academy to reject the well-deserved Nobel proposal to Galdós, who was a candidate three times. Mario Vega has designed a kind of great wave of paper that forms the only scenographic element of the montage, which takes as long as the second act lasts, 40 minutes, nothing more and nothing less.

It must be remembered that Galdós’s main adversaries were in Spain. Spanish ultra-Catholic conservatism was used extensively, especially in 1913, to prevent the award from falling on the author of ‘Fortunata y Jacinta’. Two years later, the Nobel committee again considered his candidacy on its own initiative. It was his last chance.

Mario Vega has combined the productions of ‘El Último viaje de Galdós’ with the poetic ‘Todo el cielo’ and ‘Moria’, another immersive theater project that was punished by the pandemic and which will be re-released in the Insular Theater of the Theater next January of 2021. The assembly ‘The last voyage of Galdós’ is also rerun in the 33rd edition of the Tres Continentes de Agüimes Theater Festival, on October 16, in the auditorium of said municipality.

Many Spanish authors and authors have vindicated Galdós. One of them, Rafael Chirbes, points out that the Canarian novelist, “quietly, without fuss, knew that all great literature is born in the fight against the literature that exists, because a new literary work opens a place from which to look” .