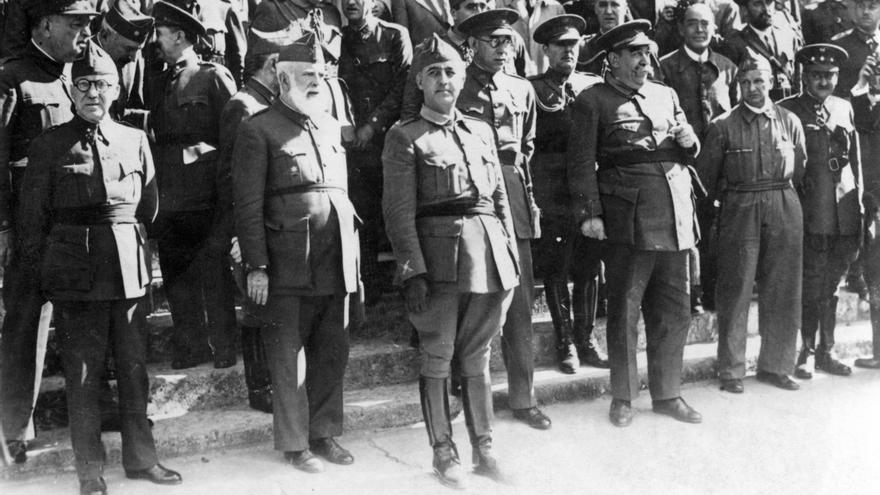 Francisco Franco died and was buried with honors 46 years ago, but the recognitions with which he distinguished those who had committed war crimes and played a key role in the dictatorship have survived him like so many Francoist reminiscences. The objective with which Franco came to grant some forty titles of nobility, with perpetual and hereditary character, was twofold: on the one hand, to “keep alive” the memory of “the great glories of the nation”; on the other, to thank them for the “services rendered” during “our Crusade”, charged with “heroic actions”, says the law of 1948 in which the dictator restores the legislation in force prior to 1931 with regard to “Greatness and Titles of the Kingdom.”

Some of these duchies, counties, and marquisates have declined, but most remain in force and now fall to their heirs. Almost all have been renewed during democracy, with governments of all political colors that have abided by the current law. Now, the processing of the Democratic Memory Law, that after the second round in the Council of Ministers continues its journey in the Cortes, directs the Francoist aristocracy to its last days: although it may still undergo changes, the text provides for the suppression of the nobility titles granted until 1978 “that represent the exaltation of the Civil War and the dictatorship”, to which prompts the Government to draw up a catalog of those affected.

To this day Carmen Martínez-Bordiú, the dictator’s granddaughter, holds the duchy of Franco, created by Juan Carlos I six days after the dictator’s death and which until 2017 was in the hands of her mother, the only daughter of the coup leader; a second nephew of the founder of the Spanish Falange is Duke of Primo Rivera, while a grandson of Emilio Mola, a general known for being one of the architects of the 1936 coup, and who wrote things like “anyone who is openly or secretly a defender of the Popular Front must be shot “, is since 2009 the third Duke of Mola. In addition, a grandson of General Moscardó holds the county of Alcázar de Toledo.

These last three, together with the politician José Calvo Sotelo, were the first to receive a noble title from the dictator on a day as symbolic for the regime as July 18, but in 1948. The reasons were none other than his “heroism” during the War: “They well deserve, both they and the services and feats they performed, to be recorded forever in the book of History and rewarded in proof of national gratitude with noble dignities that serve as a perpetual example of their lineage and greatness”, reads the decree with which the four distinctions were made effective.

They are not, however, an exception. Up to thirty people fell on the coup plotters and the military who rose up against the Government of the Second Republic, according to figure the journalist specialized in historical memory Carlos Hernández. In 1950 Franco awarded the military coup leader Gonzalo Queipo de Llano the marquisate with his name, which today falls into the hands of a grandson, while a daughter of Onésimo Redondo, founder of the JONS, is the Countess of Labajos. The dictator granted Pilar Primo de Rivera, who directed the Women’s Section, the county of Castillo de la Mota and paid tribute to the well-known ‘Bajadoz butcher’, Juan Yagüe, with a marquis for his “constant example of the most precious military virtues and civilians of courage, loyalty and love for Spain “, wrote the dictator in the decree of 1952 that decorated him.

Leaving aside the opportunity to suppress these distinctions still in force with the Historical Memory Law of 2007, the Government has now considered that they are incompatible with democracy, as memorialist organizations have claimed for years. “That they are maintained is one of the elements that continue to make us an anomaly in the democratic world. We are the only country that maintains tributes to fascist and genocidal leaders, responsible for having 40 years of dictatorship; it would be unthinkable in Germany to have a duchy of Hitler or in Italy a Mussolini marquisate, so this step places us on a path of breaking ties with the dictatorship that should have been broken then, “says Hernández.

It is foreseeable that there will be a debate with the titles granted by Franco linked not to military issues, but of a cultural or scientific nature. They are a minority, among them the county of la Cierva, granted to the inventor Juan de la Cierva in 1954, the marquisate of Ramón y Cajal or the county of Maeztu, which the dictator granted to the writer Ramiro de Maeztu in 1974, the last one that granted before his death. As explained by the then vice president and head of the Government’s historical memory, Carmen Calvo, when the Council of Ministers gave the green light to the draft of the rule, the “few” titles, five in total, that “that are linked to intellectual, scientific or academic ranks “.

Nothing explicitly says the law in this regard and the Ministry of the Presidency, Relations with the Courts and Democratic Memory, in the hands of Félix Bolaños after the renewal imposed by Pedro Sánchez, has not responded to the questions of this medium, but there are several the voices that demand that these titles also enter the package. “These are decisions made by a dictator, Franco’s decision-making power must be annulled because it is not only to which figures they were granted, which also, but who made it and in what context. It will also be necessary to see what kind of They carried out actions, even if they were of a non-military nature and in what way they participated in the dictatorship “, believes Emilio Silva, president of the Association for the Recovery of Historical Memory (ARMH).

He also agrees not to name the suspension of the distinctions Hernández, author of The last Spaniards of Mauthausen Y Franco’s concentration camps: “The dictatorship was an illegitimate regime, so the fact that Franco gave a noble title in that scenario was already responding to the interests of the Franco regime. In the same way that all the approved laws should have been repealed one by one, there are to annul all these kinds of decisions. ” The journalist bets to do it with all the titles, and “if there is any that in any case it makes sense to maintain, that it be eliminated and reinstated, but in a democracy.”

The Second Republic ended the granting of aristocratic distinctions through a decree signed on June 1, 1931 by President Niceto Alcalá Zamora in which it was said that they represented “a reminiscence of past social class differentiations.” A few months later, the Constitution made this measure official through Article 25, which stated: “The State does not recognize distinctions and titles of nobility.” This changed during the Civil War, and those who held a title recovered it in their official documents. In 1948 Franco recovered the practice by law: “The Spanish people, always a lover of their traditions and their history, at no time failed to recognize and identify their holders with the dignities they held, evident proof of the social strength of the tradition on the ups and downs of politics and times, “he justified.