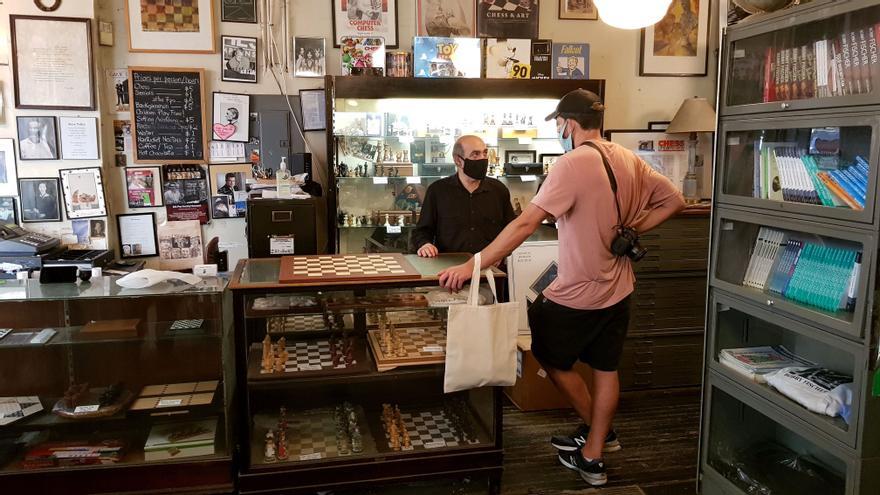 New York, Jul 19 (EFE) .- Two horse heads guard the entrance to Chess Forum in the south of New York’s Manhattan neighborhood, a business that is more reminiscent of an old antique attic than a store, a small kingdom of 64 boxes that barely resist the unstoppable siege of the internet.

“This is like a Jurassic park and I am like a dinosaur. There are many people who come in and say to me: Are you still here? And I don’t know whether to take it as a compliment or an insult. People are surprised that places like this still exist “, assures Efe Imad Khachan, the person in charge of keeping this business going since it opened its doors in 1995.

Polished wooden boards where the pieces slide almost without touching them and that Imad carefully keeps in a closet next to the counter, chess sets for all tastes that imitate WWII fighters or gods and warriors of ancient Egypt.

There are also pieces made in the image and likeness of fictional characters such as Alice in Wonderland or a game of Martians against humans.

There are designer chess pieces, pawns in the shape of Spanish buildings or rustic wood carvings, but the basic equipment, with which to start a game, a folding board with its 32 plastic pieces, can be purchased for twenty dollars.

But not all the premises are dedicated to the sale of books and boards, since half of the Chess Forum space is devoted to playing the game.

A dozen small tables line the back of the store, ready for anyone who wants to play a game with a partner or wait for a random opponent to accept the challenge of embarking on a new battle, explains Imad before complaining about that computers and mobile phones have been replacing tables and boards.

He charges five dollars an hour to play for adults and one dollar for children and retirees, prices that, he confesses, barely give him to keep the business open and that with the pandemic, which forced him to close for four months, they were close of forcing him to bow the king and close forever.

A LIFE DELIVERED TO CHESS

Imad is a Palestinian refugee born in Lebanon, who traveled to New York to study Literature, but life ended up leading him to open this business to which he has given himself body and soul, depriving him of achieving one of his greatest desires, that of starting a family, but giving him the opportunity to find a small homeland.

He remembers that the first time he saw chess was when he was five years old and that he was fascinated by the words used by the players, children of the same age, and also by the magnetic system of the board on which they played.

His memory also travels to the Lebanese civil war (1975-1990) and the Israeli invasion of 1982, when during the long nights of fighting, at home or in shelters, he remembers his father playing chess with a friend who put his life at risk. life on the streets of Beirut, just to sit in front of a board.

And he is proud that the place he runs belonged to the chess player Nicolás Rossolimo, who left his mark on a well-known variant of Sicilian defense, or that the teacher Fabiano Caruana played in his premises when he was 4 years old.

But, above all, that people of all conditions come to play, to be interested in the game and also simply to chat.

The boards are always available until 12 at night, but Imad confesses that the usual thing is to close well into the morning, something he would not do if he were married or had children, he says, while a gesture of resignation is drawn on his tired face.

“I live with two pieces of 99-cent pizza and a can of soda, but you can’t do that to a child,” he says before confessing that with the shock received by the pandemic crisis, the business was plummeting and now had made plans to close last December.

“We were dying until the Queen’s Gambit appeared (in October 2020), because nobody survives with this business (…) Suddenly, 62 million people watched the series and maybe one of them wanted to learn to play chess , increased the demand for books and boards and pieces, “he says.

“Lady’s Gambit”, the most watched miniseries in the history of Netflix and that became a worldwide phenomenon, tells the fictional life of an orphan girl who in the United States of the 50s and 60s becomes a great teacher of Chess.

However, he is aware that although this time he has dodged the check, the precarious balance of the business may force him to surrender to any minor setback.

“In the 20s it was a bakery, in the 40s a greengrocer, in the 70s a chess shop and then a printing company. We don’t live forever, I don’t know what it will be when I close, although I can see how everything turns into a Starbucks “He says with stoic bitterness, although deep down he wants the business to survive.

THE INTERNATIONAL DAY OF CHESS

“I think that every house, no matter how talented there is, has to have two things: a shelf with books of literature, history, whatever, and a game of chess,” a sentence asked about the importance of chess, whose international day It is celebrated on July 20.

For him, chess is an “essential part of the education of any child because it develops the imagination.”

“In front of a chess board is how original thinking is created, creative thinking. The thinking that they call ‘out of the box’ is on the board and you don’t necessarily have to be the next Bobby Fischer,” he declares.

From the game, he continues, you learn sportsmanship and above all to prepare yourself “to accept the consequences of your decisions.”

“Before making a move, think, and if you see a good move, don’t do it because there is always a better one. (…) Of course, time and life and the board are against you, but think before move and get ready to accept the consequences of your decisions “, he concludes paraphrasing the chess player and philosopher Emanuel Lasker.