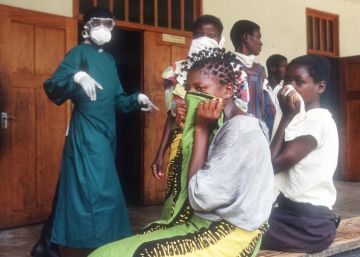 The narrative starring wars, violence, misery and despotism is quite common in Arab literature of the 21st century. They are too current realities, unfortunately. In this gloomy panorama there has been a great novel about the plague, another form of collective desolation that, at least in the West, seemed, until the Covid-19, rather a thing of the past. This was not the case in Africa, a continent with which the Arab maintains an ambiguous love-hate relationship.

Arabity has often turned its back on the decisive African component of its history, when it has not directly conflicted or denied it. Sudan It is the paradigm of this, and between the Sudan prior to the 2011 partition and the Zaire that since 1997 was called the Democratic Republic of the Congo, Ebola 76.

The novel’s title — very well translated by Rafael Ortega — speaks for itself: 1976 is the year of the first recorded outbreak of the Ebola virus, in the remote Congolese village of Kikwit. The author, Amir Tag Elsir, a prolific Sudanese doctor and writer, recreates the story of the transmission of the virus between Zaire and Sudan through the body of an unhappy worker, Nawa Lewis, a man of attributes marked by historical, social, and economic brutality. and psychological that in the last century has devastated this border territory. Nawa, like the prosopopean Ebola, wanders through Kinsasa and returns to his village, Nazara, across the border, crossing here and there with men and women as marginal as himself, whose inner lives portrayed Tag Elsir with surprising mastery in paragraphs resolved in few lines. Few such vivid descriptions of African people can be read in Arab literature, not even among the great masters of Arab Africanity, like the Sudanese also. Tayyeb Saleh or the Libyan Ibrahim al-Kuni.

The Ebola character who travels between Zaire and Sudan is an evil sorcerer, who laughs equally at his alleged counterparts – the tribesmen, who go out on their hunt – than the humans, with whom he coexists comfortably in crowded buses, alleys and shacks. Tag Elsir sharpens his particular magical realism in this work, at times naive but very little absurd and always effective, and which the author himself takes to remember Memory of my sad whores, from García Márquez.

Ebola is not a disease in Nazara, or it is not. It is above all a meticulous destination, which respects the status quo and traditions. Expats do not die, nor do francophone elites, artists, or Riek, the ex-guerrilla turned into an unscrupulous businessman who turns his factory production into masks with engraved amulets. The workers, their women, the prostitutes, the souk vendors die … And everyone has the opportunity to have their “swan song”, another non-human figure in this story. “The swan song” is what the locals call the last moment of freedom that the dying have, when what comes out of their mouth was what was ineffable, always shameful, sincere and, otherwise, bland. But Ebola is also capricious and allows false swan songs: those of those whom he decides to save. They are as useless in terms of personal salvation as the others, the true ones, with the difference that they are not forgotten and swarm among the living, increasing rumors, fear and false collective hopes.

In the end, the warlock Ebola grants a truce to this decomposing world. Waiting for a new opportunity for himself, as he had it in 2014 and 2018, several years after this work was published.