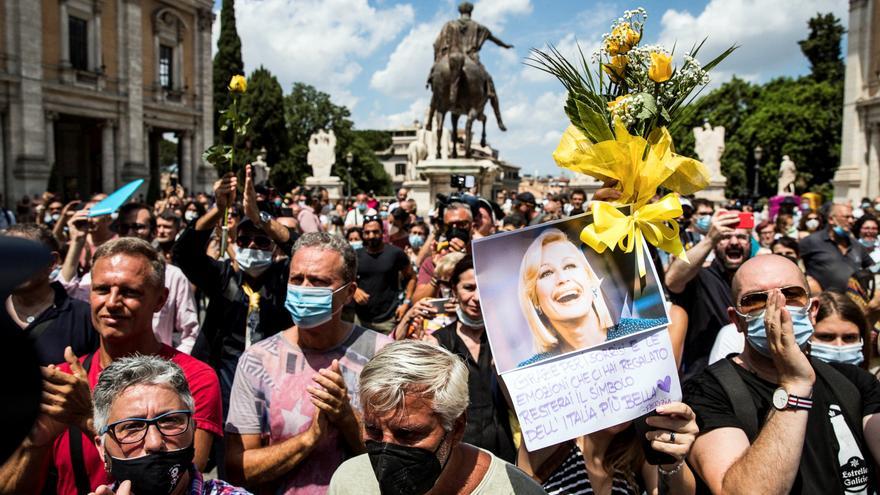 Rome, Jul 9 (EFE) .- The great diva of Italian television Raffaella Carrà, who died on Monday at the age of 78, received the last great applause at her funeral today, like the ones she used to arouse in all the shows with fascinated her whole world.

The funeral took place in the church of Santa María in Ara Coeli in Rome and gathered around two hundred people, among friends and authorities, inside the temple, as well as hundreds of admirers in the street, following him on screens and stoically enduring the Roman heat .

The coffin, exhibited in the last three days in the burning chapel in the Palazzo del Campidoglio, the city hall of the capital, entered the church on his shoulders, after having made a final journey in an escorted car bordering the Imperial Forums.

The ceremony revealed some tears among the attendees, especially in his partner and friend, Sergio Japino, but a long and heartfelt applause broke the solemnity of the moment, somehow remembering the star that he was.

“What a great woman, artist and person, she has been a symbol that has crossed a century and a millennium. Perhaps only now we see everything that was, a gift. This applause is everything for you,” he proclaimed from the altar of the church. the presenter and friend Lorena Bianchetti.

Raffaella Carrà’s funeral was experienced as a national event, bringing together authorities, friends, collaborators, dancers or followers, and, in fact, it was broadcast live on the first public television channel, RAI.

The church of Santa Maria in Ara Coeli, one of the most beautiful in the capital, on top of one of its hills, was adorned with yellow flowers, the artist’s favorite color, and her most iconic photos for this last goodbye.

Inside it, his closest friends, including the Spanish bailaor Joaquín Cortés or the Italian choreographer Carmen Russo, sat, duly distanced, while outside hundreds of admirers followed the ceremony on giant screens.

While the coffin was taken out of the temple, the faithful of the muse did not skimp on applause and sang some of his most famous songs; then they passed one by one to touch or kiss the simple wooden box in which it rested.

A PARTY IN HEAVEN

The funeral was officiated by Father Simone Castaldi and four Capuchin friars from the monastery of San Giovanni Rotondo, custodian of the remains of Italy’s most venerated saint, Padre Pio, of whom Raffaella was extremely devoted.

Castaldi praised his example of humanity and practical goodness as his was not a “rhetorical” life.

“Who knows if we realize the importance of artists, how much good they generate in people,” proclaimed the priest in front of the coffin, surrounded by flowers and photographs.

“Meeting again in heaven will be a party and I am sure that we will find Raffaella in it, in the front row,” he said.

Because, the priest explained, she, despite the doubts that arise before perishing, was aware of “all the good that she had sown”, a good “without flags or colors.”

FAITH AND HIS LAST WILL

Father Castaldi spoke of Raffaella’s deep faith, especially towards Padre Pio, a saint of great popular devotion. So much so that the artist often went to the monastery, had sponsored its new communications center and in 2002 presented a documentary about her figure.

For that reason he announced that one of the diva’s will was to “return” to the place where the saint’s remains are venerated.

Thus, the artist’s body will be cremated and then taken to the monastery of San Giovanni Rotondo, a “stage” prior to the transfer of the urn to the place where it will remain forever, her villa in Argentario, a mountain on a peninsula opposite the Tuscan coasts.

THE FAREWELL TO ROME, HIS ADOPTIVE CITY

Raffaella was not Roman, but Bolognese by birth, but the Italian capital became the place where she lived and made a career, rising as a universal Italian, face of the golden years of Italian entertainment.

For that reason, the mayor, Virginia Raggi, participated in the funeral, and visibly moved, she recalled the diva’s love for the city.