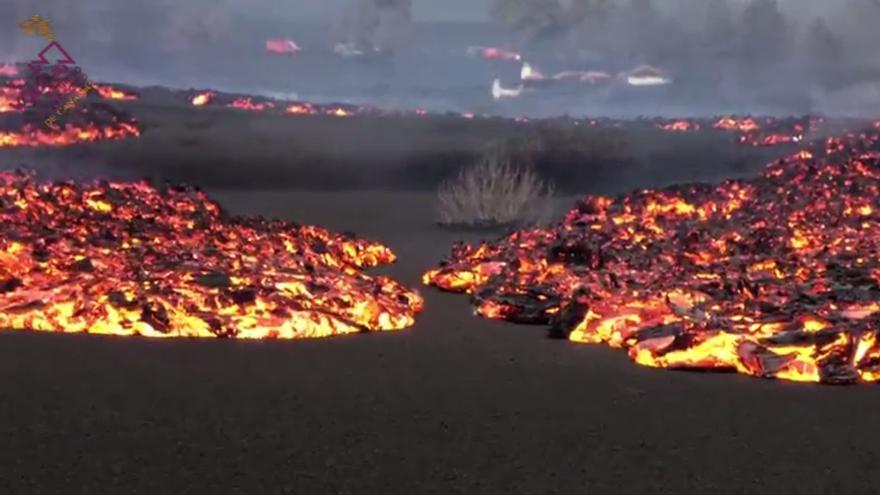 Located on the south side of the Cogote mountain, the cemetery had prevented the advance of successive streams ever closer since last September 19 until the new river of lava parallel to lavage number 10 has crossed this Thursday.

The Las Manchas cemetery had an area of ​​more than a thousand square meters and contained more than 5,000 niches and the only crematorium on the island, which made it one of the largest in the Aridane Valley.

The Los Llanos City Council had offered the families who so desired the exhumation of the remains of their relatives to rest in said cemetery, although the exact number is unknown out of respect for those affected.

On the occasion of All Saints’ Day, the so-called ‘Memory Corner’, an installation of panels with the names of the 3,610 deceased buried in the cemetery of the neighborhood of Our Lady of the Angels so that the relatives could remember them on said festivity.

After several days of decline in its activity, according to scientists from the National Geographic Institute, in the last hours there has been a greater emission of lava from the southwest mouth which has caused overflows and damage to lands that had been previously safe, as is the case of the Las Manchas cemetery.

The volcano of Old Summit has covered with lava flows a surface of more than 1,100 hectares and has destroyed a total of 1,484 buildings according to the Cadastre, of which 1,195 were for residential use.

The lava that flows from the new fissure located this Thursday to the south of the main cone of the La Palma eruption travels at about 600 meters per hour, as calculated by the Canary Islands Volcanological Institute (Involcan).

In a new video that Involcan has disseminated on social networks, you can see how the lava descends liquid and quickly on a blanket of ash.

In addition, this scientific body reports that the new wash has passed the Las Manchas cemetery and its front has been located on the Aniceto interior road.

Canarian Television has broadcast images in which it is appreciated how the lava has crossed the cemetery, destroying a good part of it, leaving an area of ​​niches standing.

#Direct | Our drone is currently flying over the area of ​​the Las Manchas cemetery, in Los Llanos de Aridane. https://t.co/V6YeAIPcPn

The lava that flows through this new stream that has reached the Las Manchas cemetery and the photovoltaic plant is causing concern because it is destroying everything in its path in an area of ​​scattered farmhouses and farmland.

It is “bad news” because the new river of molten rock runs through areas “not trampled” previously by lava “and is destroying what it finds in its path, it has passed the Las Manchas cemetery” and has flowed quite quickly, although it has subsequently slowed down because it is becoming slimy.

This is a consequence of the material that has dragged its way through areas of high urban concentration, and dispersed, which has slowed it at about 25 meters per hour, very different “from the highest rate of this morning, with a lava that probably emerges quite deep, very hot and fluid “, has added Morcuende.

Scientists and technicians are monitoring it is cast because “It is worrying” since it begins to enter an area of ​​steep slope, and in fact his trajectory will be the subject of a meeting in the early afternoon at the Forward Command Post.