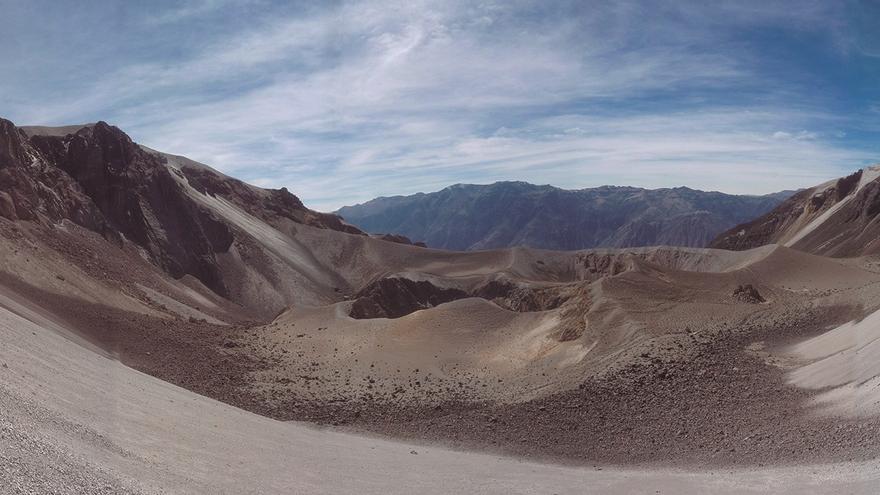 Lima, Feb 26 (EFE) .- The largest volcanic eruption in the history of South America occurred in February 1600, surpassed that of Vesuvius and featured the Huaynaputina volcano, nestled in the Andes of southern Peru, which released ash that reached Canada and even affected the climate and agriculture of Russia and Germany.

The explosion of this volcano, located about 4,850 meters above sea level and still active in the southern region of Moquegua, exceeded 30 kilometers in height and expelled about 14 cubic kilometers of volcanic material that, according to the Geophysical Institute of Peru (IGP), buried at least ten nearby towns and killed about 1,500 people.

“The year 1600 has been recorded for South America for having witnessed one of the most important volcanic explosions in the world, perhaps the largest eruptive process of a volcano, at least in South America,” the executive president of the IGP told Efe. , Hernando Tavera.

The Huaynaputina, whose name in Quechua means “young volcano”, erupted on February 19, 1600 and directly affected the Peruvian regions of Moquegua, Arequipa and Tacna, as well as other areas of the country and part of the current territory of Chile and Bolivia .

Pyroclastic flows and ash buried nearby towns and also polluted the important Tambo River, while large cities such as Arequipa and Moquegua were covered by a blanket of ash and smoke.

This phenomenon persisted for at least 30 days and the chronicles of the time indicate that Arequipa “was in the dark and they could not see the sun or the stars, they could not distinguish between day and night,” said Tavera.

Worldwide, the clearest evidence of its impact has been found in the forests of Canada, but there are also chronicles that describe that the famines that occurred in Russia between 1601 and 1603 “would have been related, because global temperatures decreased up to two to three degrees in some areas. ”

It is thus considered that it caused the drop in temperatures in the Northern Hemisphere and famine in Russia, by altering the atmosphere with the expelled pyroclastic material, in addition to reducing agricultural production in Germany.

BREAK UP GREATER THAN THE VESUBIO

Tavera explained that “if volcanic eruptions are measured on a scale from 0 to 8, the Huaynaputina explosion reached number 6” and the fumarole that it emitted at the critical moment allowed it to reach “the upper atmosphere zone.”

This caused the volcanic material, basically made up of ash, to remain for more than a year “going around the world without any problem.”

The blast left a large crater on a plateau at 4,200 meters above sea level and was higher than that of the famous volcano Vesuvius, which in 79 BC reached a scale of 5 and destroyed Roman cities such as Pompeii and Herculaneum.

Similar to that of the also famous Krakatoa and had such an impact that four centuries later pyroclastic residues have been discovered in trees in Canada that, according to research, come from the explosion in the distant Andes of South America.

“When they have cut down trees they have found that in some rings there is volcanic ash that, after dating, corresponds to this volcano,” said Tavera.

“I think that for us, having collected the greatest amount of historical information allows us to have a clear idea of ​​what the scene of volcanoes that may be similar could be,” said Tavera, referring to the importance of research on the great eruption of more than 10 years ago. of four centuries.

The IGP, a body created almost a hundred years ago, is currently studying “the dynamic behavior” of Huaynaputina through real-time monitoring and surveillance by the National Volcano Center (CENVUL), installed in Arequipa.

The volcano “is in full activity and with greater presence since 2016, registering at least one earthquake a day,” the agency detailed, while Tavera added that now it is possible to “make a fairly accurate forecast of an eruptive process,” which that it would allow “to evacuate the population and not have so many deaths when these dangers arise.”

The IGP, a body well-known in Peru for its monitoring of earthquakes in a highly seismic country, began to study volcanic activity from an explosion of the Sabancaya volcano, in the southern region of Arequipa, in the late 1980s.

In 2016, after other eruptions of the Sabancaya, it began the construction of a volcanic observatory and in 2019 created the CENVUL, from where it monitors Huaynaputina and twelve other active volcanoes in the country, among which is the famous Misti, the beautiful tutelary volcano of the city of Arequipa, one of the most important in Peru, with more than 1.3 million inhabitants today.

Tavera stressed that scientific work has already allowed to warn of imminent eruptions, such as the one of the Ubinas volcano in 2019, also located in Moquegua and the most active in Peru, which could be anticipated in ten days and allowed the inhabitants to be safely sheltered. from nearby towns.

Although that explosion reached a scale of 2 to 3, considered by experts “quite small”, the ash reached five kilometers in height and was carried by the wind to Bolivia.

Currently, the IGP maintains an intense scientific work, which in addition to dedicating itself to “earth sciences”, through the study of soils, earthquakes and volcanoes, also allows it to do work on oceans, landslides, floods of rivers, the upper atmosphere and astronomy.