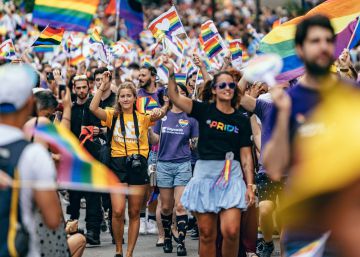 "I am gay and my brother is not," the psychologist often listens Juan Ramón Ordoñana in his interviews to the members of the only Spain's twin registry, a database of 3,500 Murcia adults. Twin brothers are a living laboratory to try to understand the influence of genetics in human behavior. The existence of people who share 100% of their genes and exhibit different sexual behaviors suggests that the key must be sought in other factors. But Ordoñana also hears the opposite phrase: "We are twin brothers and we are both gay." It is one of the most fascinating mysteries of human nature.

An international team of scientists presents today the largest study to date on the influence of genetics on sexual behavior. They have studied almost 500,000 people, 100 times more than the previous work. "Our research shows that there is no single gay gene, but rather many genes that influence the probability of a person having same-sex partners, ”explains the geneticist Brendan Zietsch, director of the Center for Psychology and Evolution of the University of Queensland, in Australia.

"There is not a single gay gene, but rather many genes that influence," explains geneticist Brendan Zietsch

Researchers have used two databases: 410,000 people between 40 and 70 years of age. United Kingdom Biobank and another 68,500 of the archives of the American company 23andMe, with an average age of 51 years. His first analysis showed that close relatives, at least cousins, were more likely to exhibit similar sexual behaviors. Through a complex statistical procedure, the authors estimate that a third of the differences observed in the sexual behavior of these relatives can be explained by inherited genetic factors.

The second analysis went further. A person's operating manual is written in 3,000 million letters in the nucleus of each cell. The Zietsch team has searched for minimal genetic variants – a single letter – correlated with homosexual behaviors. According to their calculations, the summed effect of all these small variations in the DNA sequence could explain between 8% and 25% of the differences detected in sexual behavior. The disparity of these figures with 33% of the first analysis could be due to the fact that the technologies used are not sophisticated enough to locate all the genetic variants.

The rest of the differences are due to the so-called environmental factors. “In this case, the word environmental only means that they are not genetic influences. It doesn't have to be anything related to education or culture. They could be non-genetic biological effects or the prenatal environment in the uterus. Our study does not shed light on these influences, ”said Zietsch, who signs the research with geneticists, psychologists, sociologists and statisticians from centers such as the University of Cambridge and the Broad Institute of the Massachusetts Institute of Technology and Harvard University.

The authors of the study, which is published this Thursday in the magazine Science, they have only identified five genetic variants correlated with homosexual behavior, but with minimal influence. Adding their effects, they would explain less than 1%. "It's basically impossible to predict a person's sexual activity or orientation because of their genetics," states the statistician Andrea Ganna of the Broad Institute.

“There is no gene for homosexuality or heterosexuality or intelligence. They are very complex behaviors, probably linked to hundreds or thousands of genetic variants distributed throughout the genome, ”says Ordoñana, a researcher at the University of Murcia who has not participated in this study. The combined effects of these thousands of genetic variants today unknown would add those influences detected of 33% or 8% -25%, depending on the type of analysis.

Of the five variants identified, two are shared by men and women, two are male and one is female. Its individual effect is so small that it can only be detected in investigations with hundreds of thousands of citizens. For example, 4% of people with a variant in the rs34730029 position of the genome exhibit homosexual behavior, compared to 3.6% who do not have that variant. In order to identify more relevant differences in DNA, millions of people will have to be studied.

Researchers have found "a genetic correlation" between homosexual behavior and depression.

Researchers have also found "a genetic correlation" between homosexual behavior and some personality traits, such as feelings of loneliness, openness to new experiences and risky habits, such as smoking and marijuana use. They have also observed a genetic correlation with some mental health problems. On a scale of 0 to 1, where zero means that genetic influences do not overlap in two different traits, depression reaches 0.44 in women and 0.33 in men, while schizophrenia reaches 0 , 17 in women and 0.13 in men.

“It is important to stress that causality is not clear. One possibility is that the stigma associated with sexual behavior with people of the same sex causes or exacerbates mental health problems, ”Zietsch emphasizes. "But we don't have enough data to untangle the different options," he admits.

The authors have tried to understand the biological mechanisms of the five genetic variants related to homosexual behavior. One of them is located in a stretch of DNA that houses genes related to the sense of smell, linked to sexual attraction. Another variant is associated with male baldness and a relevant gene in the formation of the gonads, which "supports the idea that the regulation of sex hormones could be involved in the development of sexual behavior with people of the same sex", According to the researchers. "Heterosexual genetic variants are the other side of non-heterosexual ones: in the same locations, but simply with other code letters," summarizes Zietsch.

The regulation of sex hormones could be involved in the development of homosexual behavior, according to the researchers

The investigator Simon Heath, however, believes that "there is no powerful scientific basis" that links the genetic variants detected with genes related to smell and baldness. “They are based on looking at nearby genes. And you can always build a good story wherever the genetic variant is, ”says Heath, of the National Center for Genomic Analysis, part of the Center for Genomic Regulation of Barcelona.

In the opinion of this expert, the new study is "well executed", but has some limitations, such as putting a person on the label of homosexual behavior simply because he had only one of these experiences in his life. "It is a very simple definition that hides much of the complexity of sexual orientation," he says.

In addition, Heath notes, there are other elements to consider. The 410,000 participants in the United Kingdom filled out a general questionnaire in which 4% of men and 2.8% of women claimed to have had at least one sexual relationship with a person of the same sex. In the US, that question was voluntary and those who responded positively reached 19%, "which may be because people with unconventional lifestyles are more willing to answer," Heath hypothesizes. "This difference in the data sets makes it difficult to interpret the results," he says.