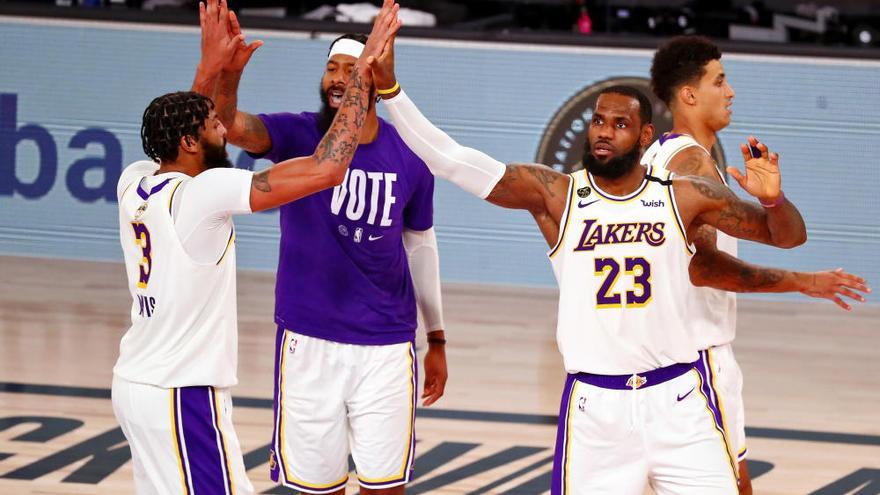 The eaves Lebron James already has in his possession a new title of champion of the NBA, the fourth of his brilliant career, after Los Angeles Lakers showed off against the Miami Heat in the sixth match of the Finals for 106-93 they won 4-2 to the best of seven.

The Lakers claim their 17th NBA championship title, their first since 2010, and tied with the Boston Celtics like the best dynasties in the league.

James achieves his fourth NBA champion ring with three different teams after having won two with the Heat, the third with the Cleveland Cavaliers and the fourth with the Lakers, after having played 10 Finals.

Although the match lasted 48 minutes, in reality the title was already defined from the first quarter (28-20), when the Lakers wanted to make a basketball really, after having been less competitive in the third and fifth, to overwhelm in all facets of the game a Heat with nothing to offer.

James, who finished with a triple-double of 28 points, 14 rebounds and 10 assists, which earned him his fourth Most Valuable Player (MVP) award in the 10 Finals he has played, had already defined the victory of the Lakers at the end of the first half with a partial of 64-36.

The star forward got his 11th triple-double in the NBA Finals, new mark in the history of the league.

James had already had 11 points, nine rebounds and six assists at the end of the first half, while the Heat had become a completely unrecognizable team, since all their attack was missing and their defense did not exist.

In this way, the pivot Anthony Davis, which also ended with a double-double of 19 points, 15 rebounds and three assists, and veteran point guard Rajon Rondo, who scored 19 points, 13 of them in the first half when he scored all six shots he made to the basket, including a triple, left the game sentenced.

The rest was nothing more than complying with the record and leaving more questions about everything that had happened in the two games won by the Heat - third and fifth in the series - especially when seeing that the third period concluded with another partial of 87 -58, with nothing changed in the game by the Miami team, despite the Heat regaining their starting point guard, Slovenian Goran Dragic, who had missed the previous four games of the series.

The Lakers returned to their traditional jersey after Game 5 they wore the so-called "Mamba" in honor of the former escort Kobe bryant, which was the last to give the Lakers a title, in 2010, along with the Spanish pivot Pau Gasol.

James and the rest of the Lakers players said that fighting for the title and getting it was the best tribute they could do to the spirit of Bryant, who died in helicopter crash last January with his daughter Bianca, 13, and seven other people traveling in the ship that crashed.

The pivot Bam Adebayo he was the only Heat player who remained competitive against the Lakers by posting a double-double of 25 points, 10 rebounds, five assists and two blocks.

But the guard-forward Jimmy Butler, who had been the best player of the Heat, in the two wins they had achieved, completely disappeared and finished the game with just 12 points, eight assists and seven rebounds.

The same points as forward Jae Crowder and guard Duncan Robinson, who in Game 5 had been decisive with his triples and scored just 10 points to complete the list of the four Heat players who had double-digit numbers.

The Heat at the end of the first half were the first to they gave up and still did not react while the only player fighting was Adebayo.

The final score was made up when the Lakers withdrew all their starters from the field before the end of the game and the Los Angeles team stopped defending.

The Heat, who played the sixth Finals in their history, the first since 2014 when James was with them, lost them for the third time, second in a row.

In this way the regular season of the NBA 2019-20 ended, which had to be played in the Orlando bubble to protect players of the coronavirus pandemic that forced since last March 11 to suspend the competition for more than four months.

The bubble set up by the NBA, in which there were no spectators, cost the league 150 million dollars, which they somehow recovered with the television rights, which in the end were able to broadcast six games of the series for the champion title .