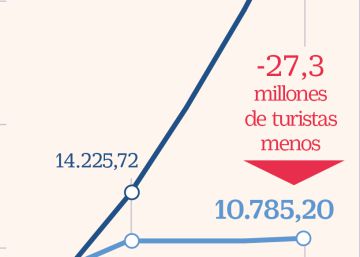 Dramatic. This is the situation depicted by those responsible for some of the best hotels in Spain. Many, after writing off the 2020 tourist season in an attempt to save furniture, rushed to open this summer in the hope that once the pandemic was under control, foreign customers would slowly return.

This is not the case, or at least it is not at the rate required by luxury hotels, where 65% of guests are foreigners, according to the latest report from the BNP Paribas bank. The latest data from the National Institute of Statistics speak of an accumulated loss for the year 2020 of more than 27 million foreign tourists until June, the last month available. The reports for the month of July, which are pouring in from the hotelier associations, are not much better. The Association of Hotel Entrepreneurs of the Costa del Sol, an area that includes towns such as Marbella, one of the national bastions of high-end hospitality, accounted for just over the 40% occupancy during this month, with an arrival of foreigners that does not reach 25%. This, in Andalusia, one of the favorite places of the Spanish traveler according to the BNP’s own report, because in 2019 the community accumulated 21% of the national overnight stays.

In Madrid, the situation is even worse. Of the 31 five-star hotels that are part of the Madrid Hoteliers Business Association, only four are open – the URSO Hotel & Spa Madrid, the NH Collection Madrid Sweden, the Hospes Madrid and the Barceló Torre de Madrid – and its occupation, they say from the organization, barely reaches 15%. “We have not even tried to open in August. We will do it in September, although without the Americans, who are large emitters, without the British, who have to quarantine when they return, and without the Asians, hardly any reserves enter. We trust in late check-ins ”, explains Verónica García, CEO of the Hotel Orfila Relais & Châteaux and the Heritage Madrid Hotel Relais, both five-star hotels.

Things are going somewhat better, for example at the Precise Resort El Rompido, in Huelva, a business that depends more on the French tourist than on the one who arrives from the United Kingdom and that is knowing how to exploit its immense golf course to attract fans of this sport . Even so, its percentage of reserves remained at 50% in July and in August it barely reached 60%, when in the summer months they tend to easily exceed 90%, explains Raquel Galván, its commercial director.

Towards a black autumn

“A 50% August like the one we have is a catastrophe”, says, less optimistic, Fernando Al-Farkh, director of Los Monteros, a five-star hotel located in Marbella. The void left by the lack of tourists from abroad, explains Al-Farkh, is for now too great in exclusive hotels to be filled by the attraction of national clients. In addition, he believes, it is a consequence of the uncertainty caused by misinformation: “The other day an Italian client asked me if it was true that she had read that 40% of Spaniards had coronavirus. The information is being handled very badly ”. As a result, the hoteliers explain, the months of September and October are adding almost one cancellation for each reservation.

This is also happening to Jorge Manzur, general manager of Anantara Villa Padierna, who accounts for only 10% of reservations for the autumn months due, above all, to the lack of large groups of conventions and weddings, which are the events that usually save those months. But Manzor is positive: “We are not giving security with the information and there is a lot of yellowishness about the cases of coronavirus in Spain, but, sooner or later, the English will have to return. Insurance”.

According to the airlines, there is twice the probability of hitting the primitive than of getting infected in a plane

Spain beats the daily record of infections for the second consecutive day with 20,986 new cases