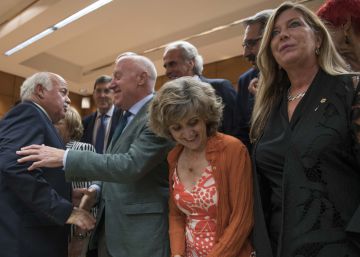 The different points where listeria has been detected within the Magrudis factory and the high concentration of the bacteria in the meat point to a failure in the self-control system to which the company is bound. This was recognized yesterday by the deputy director of Health Protection of the Junta de Andalucía, Jesús Peinado, who for the first time in crisis He pointed directly to the meat as the main responsible for the largest outbreak of listeriosis in Spain, which has affected more than 200 people and has caused the death of at least one person and the abortion of another woman. "The responsibility lies with the company that is the one who must guarantee that its product reaches the market in good condition," Peinado said.

Until now, the Board had always highlighted Magrudis' cooperation with health authorities. The Andalusian Minister of Health, Jesús Aguirre, came to affirm in an interview with the newspaper Abc that the company "has had bad luck in this contagion" and that "they had to be good because they started operating in 2015 and their production grew significantly."

The appearance of listeria in the baking cart – Found from samples taken in the post-cooking phase of the meat – it has led the technicians of the laboratory of the City of Seville to review the temperature of the oven, to verify that this is the one that was actually included in its self-control plan , in which it is certified that it warmed to 83.9 degrees. The bacterium dies at temperatures above 75 degrees. The Board has recognized another irregularity in the way Magrudis proceeds. The factory carried out in July some works to expand its facilities that required prior authorization. For its concession it would have been necessary to visit the ships and supervise their self-control plans, according to Peinado. The owners did not notify the reforms until July 31, when they had already begun to produce meat on the ships.

The experts consulted agree that the extensive presence of listeria in the factory shows a clear responsibility on the part of Magrudis. "This is not due to bad luck. Food contamination and poor conservation have caused a multiplication of the bacteria," explains Antonio Arena, Professor of Infectious Diseases at the University of Córdoba.

"If the self-control system has failed or there is any negligence of the company, that will have its consequences," said the Deputy Director of Health Protection. The true manager of Magrudis, José Marín, does not feel appealed. "Why are they going to punish me? I haven't done anything," he said yesterday to the media, after justifying in Abc that: "If there are bacteria in the operating rooms, how could I not have them in my factory?" His lawyer, Juan Antonio Romero, will come today to the headquarters of Magrudis to review all the documentation, as confirmed to EL PAÍS. "He says everything is in order," Romero said.

The acting Minister of Health, María Luisa Carcedo, acknowledged after the inter-territorial meeting with the rest of the Health Councilors to address the crisis, that in this outbreak "there has been a failure", but that "in Spain food security is very high "informs Celia Lopez. Magrudis has a self-control program to ensure that its products arrive safely to the market since 2017. Within that system, whose rigor is now questioned by the Board's researchers, it includes the obligation to make five samples per product. "Knowing how many were taken and the last time they were taken can indicate the degree of diligence of the company," explains Professor José Juan Rodríguez, head of Nutrition and Bromatology at the Autonomous University of Barcelona and member of the Spanish Security Society Food.

The listeriosis outbreak begins to remit and it has entered into what José Miguel Cisneros, spokesman for the monitoring group of the Board crisis, has defined as "inflection phase", a period with fewer cases, but with "a drip" until October. The Andalusian adviser said that "in 10 or 15 days we will have the outbreak controlled." Aguirre made those statements after the inter-territorial meeting in which he defended the efficiency of his crisis management.

The only new contagion confirmed yesterday raises those affected in Andalusia to 193. Of them, 83 are hospitalized and 28 are pregnant. Cisneros confirmed that one of the two abortions produced before the health alert was caused by the outbreak. Yesterday, the first infected abroad was also known, an English citizen who took infected meatloaf in Huelva and developed the symptoms in Paris.

As this newspaper already said last Sunday, the Police Unit attached to the Superior Prosecutor's Office of Andalusia has initiated a criminal investigation at the request of the Patient Advocate Association, which has requested that the responsibilities of the Magrudis company be cleared. The Superior Prosecutor's Office of Seville also investigates the repackaging of the company that sold La Mechá meat without a label, after being denounced by the Board.