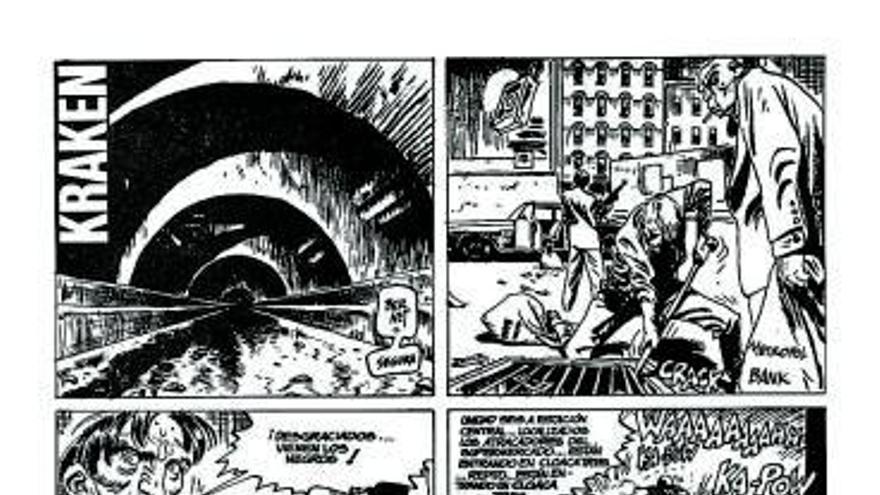 A fortunate conjunction that, added to the need to get rid of the infantilizing consideration that the comic had lived for decades, was embodied in an immense range of suggestive works, from those that drank from tradition to those that broke it from the most rabid avant-garde. The kiosks were filled with magazines aimed at an adult reader who was looking for a different comic: from the renewal of the TOTEM or CIMOC genre to the modernized tradition of 1984 or Creepy, passing through the aesthetic avant-garde of Cairo or Madriz.

The offer was so wide that proposals soon appeared seeking the riskiest pirouette, such as Metropol magazine. Born from a cooperative initiative of cartoonists, in the best tradition of TioVivo or Metal Hurlant, it differentiated itself by establishing an original offer in which all the stories took place in a single space, the imaginary city of Metropol. An authentic tour de force that was based on the unlimited talent of one of the best scriptwriters in the national comic: the Valencian Antonio Segura.

With a solid literary training and a deep connoisseur of the black genre, he proposed a complex choral work in which different stories were interrelated without damaging their individual essence. Each series was autonomous, but left small details and clues that allowed a second meta-reading, on two levels where not only the intelligence and imagination of the screenwriter shone, but also his political commitment. Although the experience barely reached a year of existence, some of the series drawn by renowned authors such as Manfred Sommer, José Ortiz, Luis Bermejo, Jordi Bernet, Leopoldo Ortiz or Leopoldo Sánchez managed to survive in other magazines. One of them was Kraken, drawn by Jordi Bernet and recognized as one of the best creations of the prolific tandem.

Segura presented a black genre story with sci-fi and horror edges that posed the Metropol sewers as an authentic circulatory system that gave life to the city, but with stinking vital fluids of misery, death and depravity. Lieutenant Dante, of the Krakan brigade, was the reader’s particular Virgil for the descent into the circles of a hell full of rats, rot, lost lives and a formless Lovecraftian monster, a mythological Kraken that left the oceanic waters to be confined in a sewer jail.

A perfect setting for the Valencian to unleash a depressing vision of the human being, where extreme violence becomes the only form of relationship between the inhabitants of a corrupt society. Each story delved into the monstrosities of the human being, the only true aberration of creation, with sour metaphors of reality that could be found in any newspaper, but without a hint of morality. On the contrary: Segura’s stories never had an ending that would allow an edifying reading and evil raged freely without punishment. Justice is just the corrupt face of a hypocritical system and goodness is just one more facet of the multifaceted reality of a human being with more shadows than lights.

A forceful speech that Jordi Bernet rounded off into a masterpiece with his impressive mastery of graphic narrative, with pages that ranged from expressionist terror to action scenes of a force that went beyond the vignette. Almost forty years after its conception, the DQomics publishing house publishes a comprehensive care of the entire work in its original and powerful black and white, which allows us to verify that its virtues not only remain intact, but that its message is worryingly recognizable today.