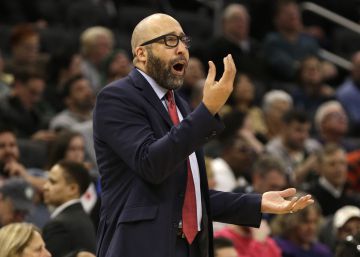 The Knicks find no remedy. There is no one to fix the mess of one of the most economically powerful franchises in the NBA. And, even less, David Fizdale. The club just fired him. He was serving his second season at Madison Square Garden. The team does not lift its head. He is last in the East with four wins and 18 losses. Rains, it pours. Fizdale has to leave and the balance cannot be worse. He is the coach with the worst winning percentage in the history of the Knicks, which is to say. 21 wins and 83 losses give him 20% success, less than 28% of Larry Brown (23-59) and 29% of Derek Fisher (40-96).

The Knicks have not qualified for the ‘playoffs’ for six seasons. The last time they got it was in 2013. With Mike Woodson on the bench and players like Carmelo Anthony, Amare Stoudemire, Raymond Felton or JR Smith were eliminated by Indiana in the Conference semifinals.

The Fizdale stage has influenced the errors. They allowed their franchise player, Kristaps Porzingis, will leave in January, in a multiple transfer in which they also lost Courtney Lee, Tim Hardaway and Trey Burke, to receive from Dallas DeAndre Jordan, Wesley Matthews and Dennis Smith, the only one still in the team.

The Knicks were very hopeful to be able to recruit two super figures last summer. Anthony Davis had already opted long before for the Lakers. The final blow for the Knicks was when Kevin Durant and Kyrie Irving They preferred to sign for Brooklyn Nets. Nor were they very lucky in the ‘draft’ lottery. They had to choose in third place. The star wanted by everyone, Zion Williamson, rose in New Orleans. Memphis, the second to choose, opted for Ja Morant and the Knicks took over the services of JR Barrett, an escort from Duke University, which averages 14.4 points, 5.1 rebounds and 3.3 assists. A veteran, Marcus Morris, is the top scorer of the team, who with Randle, Ntikilina and Gibson, and despite some good notes from Kevin Knox, is not able to be minimally competitive. It has been eight consecutive losses and the last two were against Denver, by 37 points of difference, and before Milwaukee, by 44.

Fizdale, before arriving at the Knicks in 2018 and with a four-year contract, had been fired by Memphis in November 2017 after an episode in which Marc Gasol was accused of having influenced the Tennessee franchise decision . The Spanish pivot has always denied such an extreme.

Since James Dolan became the owner of the Knicks in the 1999-2000 season, the team has had 12 coaches, a record he shares with Memphis, Phoenix and Detroit. Expectations were very high during the Mike D’Antoni stage, but they only reached twice the ‘playoffs’, in 2011 and 2012, and both fell in the first round. A short time came the stage of Derek Fisher on the bench, Carmelo Anthony as a reference player and Phil Jackson in the offices. Phil Jackson fired Fisher and after a brief stage of Kurt Rambis as interim he signed Jeff Hornacek. In 2015 he had chosen Porzingis in the fourth position of the draft. Nothing worked The franchise fired Phil Jackson in June 2017. And he relieved Hornacek for Fizdale in the summer of 2018. Now, he will look for a new coach for a team sunk in the table and with little prospect of being able to straighten the course.

“I have not signed any player with exorbitant salary”

Saudi Arabia like it, but the Dakar 2020 not so much | sports