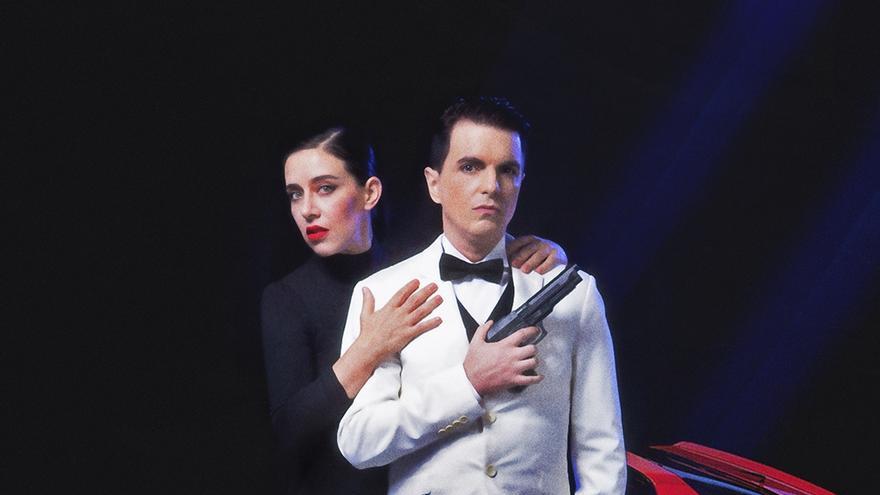 Buenos Aires, May 14 (EFE) .- Dressed as gauchos, drinking mate, milking cows and surrounded by black pudding and eggs. This is how the Miranda presents! more kitsch their eighth album, “Souvenir”, in which the Argentine duo makes use of the pop and electronic rhythms that have characterized their 20-year career and receives the Spanish Sidonie and the Chilean Javiera Mena as guests.

In love not only with making songs but also with creating delirious video clips, Juliana Gattas and Alejandro Sergi come back with ten new songs that synthesize their traditional sound: “We are inspired by ourselves,” the female part of the band tells Efe.

And that inspiration led them to once again trust the graphic designer Alejandro Ross, in charge of the album’s aesthetics, the same as the video of the song with which it is presented, “Por amar al amor”, in which they dress as country woman and man combining surrealism and color with the purest dance-pop style.

“It was looking for symbols that allow us to play a bit with the concept of the gaucho, which is so far removed from house music, electronic music, disco music. Black pudding, mates, rebenques (typical whip) and pop,” says Gattas.

It is, in short, the album cover in action: “That a cover art does not remain on Spotify or in the record store, but that we can take it with us everywhere,” he sums up.

Something that already happened with his previous work, “Fuerte” (2017), in which ‘Juli’ appeared dressed as a groom carrying ‘Ale’, disguised as a bride. Clothing that some fans came to emulate when attending their shows.

“Souvenir”, which went on sale a week ago, has been brewing for a long time. So much so that half of his songs were coming out as single singles in recent months, during the pandemic. Among those already known are “I like you so much”, which is now being reverted together with Sidonie, and “Between the two”, composed and performed with Javiera Mena.

“With Javiera we got together to compose for the simple fact of doing it in the studio, without project of making a song for anyone in particular, but simply of making it. And then it was saved in each one’s computers”, Sergi explains.

But time passed and they proposed to the Chilean to recover it and record it together, in the distance: “The only thing we did in person was the composition. But it was, I would almost tell you, that of all the stages of the songs in which it is most valued be face to face “, underlines the singer and songwriter, 49 years old.

With Sidonie it was different. On their last tour in Spain, Argentines were looking for groups that wanted to sing with them, and someone told them about the Catalan band, whose music they already knew.

“We wrote to them and proposed to them directly. And it turns out that they also liked our music. It occurred to us to do a reversal of ‘I like you so much’, and the truth is that their voices -also recorded in the distance- remained incredible in the song, it’s like a party, “says Ale.

ADMIRATION BY FANGORIA AND ANA TORROJA

Miranda’s bond with Spain is closely linked to her friendship with Alaska and Nacho Canut, members of Fangoria, with whom they have even recorded various songs.

“It has been our great beacon for many years,” says Juliana of the veteran duo, whom she admires from their philosophy as a group to their ability to stay modern.

“They continue to surprise me, and I hope that is what happens to us,” adds the 42-year-old interpreter.

When asked about whom they would like to collaborate with in the future, they name Guille Milkyway, from La Casa Azul, but also Ana Torroja.

“We met Ana once in ‘La Voz Chile’, where we had gone to sing and she was part of the jury. And we were like two fifteen-year-olds chasing her all over the dressing rooms,” recalls Sergi.

Alejandro met Juliana through mutual friends and they started out as a jazz duo before founding Miranda! in 2001.

Since then, the band, which for years had more members, has captivated with hits such as “Perfecta”, “Don” and “Yo te dice”, and received many awards.

“It is very surprising and gratifying to see all the way we have traveled and to feel the same, with our passion intact, with the desire to continue doing and with the same spirit of showing new music,” says Sergi.

With protocols and limited capacity, as they did in other recent concerts, this Friday they will take the stage of the Mercedes Sosa theater in Tucumán. Because without a doubt, the best way to celebrate 20 years of songs is singing with your audience.