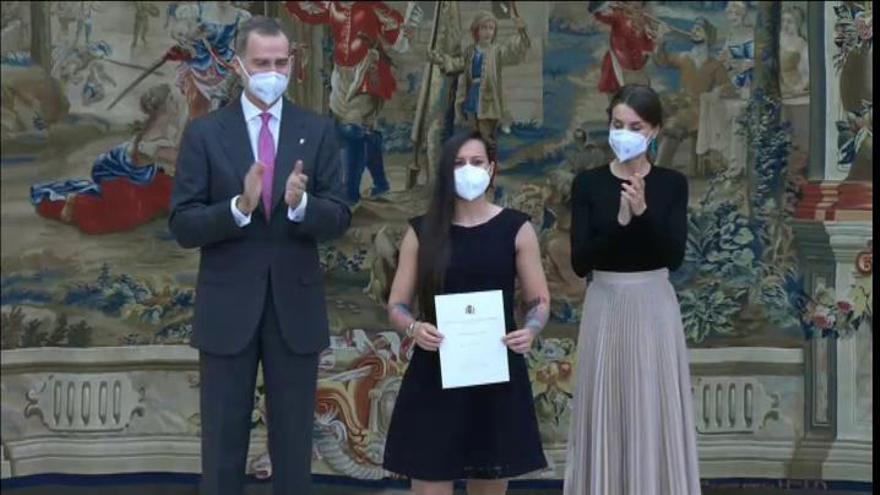 The snowboarder Regino Hernandez, bronze in the Olympic Games by PyeongChang, the cyclist Alejandro Valverde and the boxer Joana pastrana, both world champions, collected on Tuesday the National Sports Awards as the best athletes of 2018, an act that was postponed last year due to the coronavirus pandemic.

The ‘rider’ was the only one absent, and his trophy was received by his father, Regino Hernández, in a ceremony held as is traditional in the Royal Palace of El Pardo and presided over by His Majesty the King and Queen Felipe VI and Doña Letizia Ortiz. It was also attended by the Minister of Culture and Sports, José Manuel Rodríguez Uribes, and the president of the CSD, Irene Lozano.

These awards, which are held annually by the CSD and whose 2019 edition has not yet been failed, they recognize the people and entities that have contributed in an outstanding way to promote or disseminate physical-sports activity.

Thus, the Rey Felipe Award for the best Spanish athlete it was delivered jointly to Regino Hernández and Alejandro Valverde. The ceutí conquered a historic bronze in snowboard in Pyeongchang 2018, being then the third Spanish medal in a Winter Games, after those of the brothers Paco and Blanca Fernández Ochoa in Alpine ski, and the Murcian achieved the first World Cup gold of his career by winning the Road World Championship held in Innsbruck (Austria).

For his part, Queen Letizia Award it was for the boxer Joana Pastrana, the first Spanish to win the European Championship of the minimum weight and that in 2018 achieved the IBF world title, while King Juan Carlos to the revelation fell to the pilot Ana Carrasco, first woman to win a World Championship in Speed, the Supersport 300 category of the World Superbike.

The Canarian chess player Sabrina Vega Gutierrez received the Reina Sofía Award for the especially relevant gesture of nobility or fair play in sports for his resignation to play the World Rapid Championship in protest of the playing conditions for women in Saudi Arabia, and the Princess Leonor, for the athlete or the most outstanding U-18 athlete, was for the athlete and soccer player Salma Celeste Paralluelo Ayingono, U-17 world champion in 2018 with the women’s team, who was awarded the Barón Güell Cup.

The rest of winners they were the Sanitas Foundation (Infanta Sofía Prize); the University School Real Madrid-European University, collected by the Director of Institutional Relations of Real Madrid, Emilio Butragueño, and Fundación Ecomar (Copa Stadium); the Don Benito City Council (Superior Council of sports); the University of Jaén (Joaquín Blume Trophy); and the General Council of Official Associations of Graduates in Physical Education (COLEF), National Award for Arts and Sciences Applied to Sports.