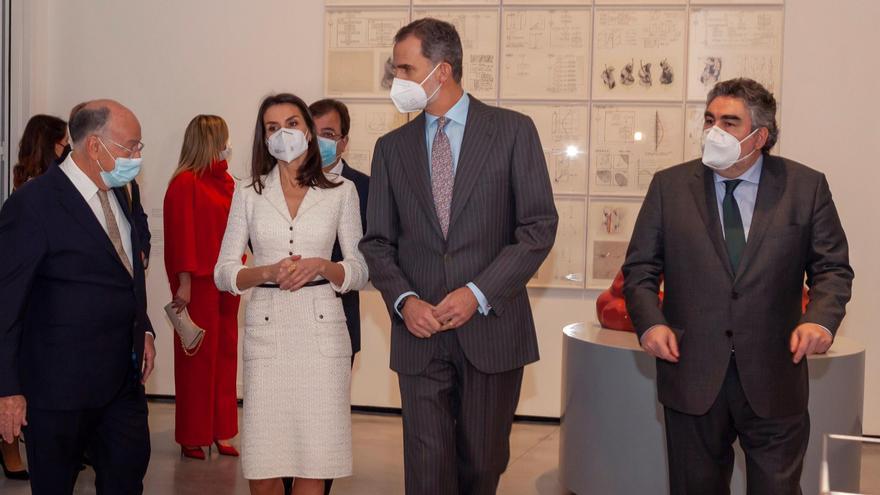 The Kings have underlined this Thursday, at the inauguration of the new Helga de Alvear Foundation Museum of Contemporary Art, in Cáceres, the necessary and priority nature of culture, especially in the current context derived from the pandemic.

Don Felipe and Doña Letizia have inaugurated this new museum space, which opens its doors with 200 works of contemporary art of the 3,000 that this founding entity has, and which bear the signature of Picasso, Eliasson, Kandinsky and even Goya.

The Kings have been received, around 11.30 am, by the Minister of Culture and Sports, José Manuel Uribes; the president of the Junta de Extremadura, Guillermo Fernandez Vara; the government delegate, Yolanda García Seco, and the gallery owner and vice president of the Foundation, Helga de Alvear, among other authorities.

After discovering a commemorative plaque outside the enclosure, the Kings have signed in the museum’s book of honor. In his dedication, Philip VI Y Mrs. Letizia have expressed that “In times as hard as we are living with the pandemic, it is great news that culture continues to be necessary and a priority for society“.

Cáceres and Extremadura, as they have reflected, “are in luck for having here this great museum that will be home to one of the most extraordinary art collections in Spain.” Likewise, they have thanked and congratulated all the people and institutions that have contributed “for a long time and overcoming many difficulties so that today -the museum- is already a happy reality.”

After five years of works and an investment of 10 million euros, contributed 50 percent by the regional government and the Foundation, the new museum space, the work of the architect Emilio Tuñón, not only unites the old city of Cáceres with the widening of the urban fabric, but also links Helga de Alvear’s desire to bring culture closer to citizens.

The Kings have toured this new property, which is competing for the ‘Mies Van de Rohe 2021’ European Architecture Awards, built with a design of “simple volume, from the formal and constructive point of view”, and whose exhibition halls are grouped by means of an “orderly and flexible” structure organized on four levels, as described by Tuñón.

Curated by José María Viñuela, the exhibition reflects and exposes the passion for art of Helga de Alvear, who at all times and together with Viñuela himself, have detailed and exposed its content to the kings.

The sample includes outstanding pieces by fundamental artists of the 20th and 21st centuries that make up the Helga de Alvear Collection, such as Goya, Picasso, Kandinsky, Ai Weiwei, Olafur Eliasson, Dan Graham, Joseph Beuys, Thomas Hirschhorn, Tacita Dean or Katharina Grosse, among many others.

During their visit, Don Felipe and Doña Letizia have been able to observe, among others reference works, Chinese artist and activist Ai WeiWei’s lamp, ‘Descending Light’, composed of 60,000 red crystals; the first work that was mounted in the new museum and the first that the visitor discovers when stepping on the main hall.

They also welcome Goya’s ‘Caprichos’, a series of 80 engravings in which the painter from Fuendetodos satirically illustrated the society of the late 18th century. One room shows the facsimiles of the original work acquired by the gallery owner. Although the original book is also exhibited, exact reproductions have had to be made since the engravings cannot be unbound.

In this same space, in a more humble way, the chromatic richness of Yves Klein shines at the top of a corner with his famous miniature cast of “The Victory of Samothrace”.

Also on your visit, The Kings have visited the room dedicated to the work ‘Power Tools’, by the Swiss artist Thomas Hirschhorn, an installation with an extension of 80 meters and that includes videos and various materials, and the work “Used Korean Bedding”, a textile sculpture by the artist Kimsooja.

They have also toured the various video-art projection rooms, where works such as ‘The Confetti Piece’ by David Claerbout (the latest acquisition that the gallery owner made at the Arco fair in February 2020) and a video-installation by filmmaker Steve are shown. McQueen.