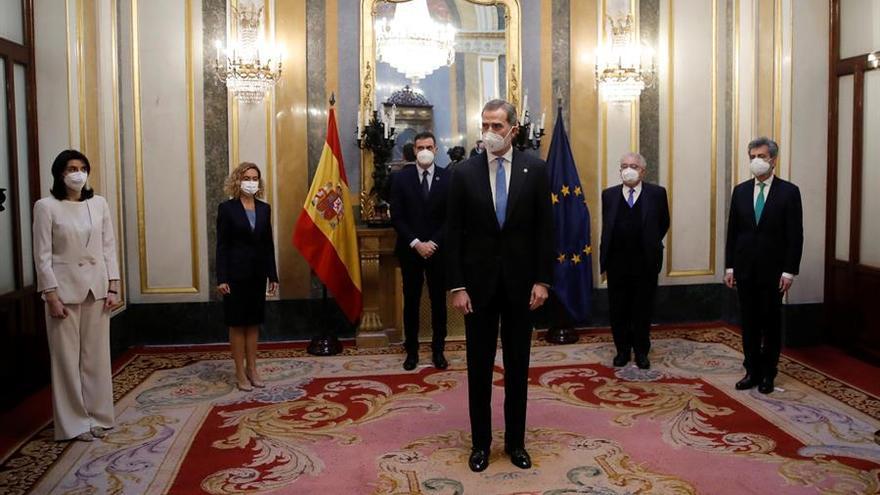 The emeritus king Juan Carlos I was the main absentee this Tuesday from the act of commemoration of the 40 years of the coup attempt of 23F that has taken place in the Congress of Deputies. Fled to the United Arab Emirates since August due to the investigations of the courts on his finances, his name has however been mentioned both by the president of the Congress of Deputies, Meritxell Batet, and by his son, King Felipe VI who, following the Official account of the last four decades, they have vindicated their role so that that coup that led to the entry of Lieutenant Colonel Antonio Tejero into Parliament, gun in hand, failed.

“King Juan Carlos I assumed as head of State his responsibility and his commitment to the Constitution so that – and I quote – ‘all the necessary measures to maintain constitutional order within the current legality’ be taken. This was communicated to all the Spaniards in a televised message that is already part of our collective memory. Their firmness and authority were decisive for the defense and triumph of democracy, “the current monarch highlighted.

His words were just a three-page paragraph of speech, but they acquired a special relevance due to the procedural situation of Juan Carlos I, his departure from Spain since last summer and the questioning of the parliamentary monarchy and the Constitution by the left and nationalism, –which has supported the recent street protests that emerged after the imprisonment of rapper Pablo Hasel– that has absent himself from official acts. “It is very difficult to say that the monarchy is a necessary condition for democracy,” Pablo Iglesias, the vice president of the Government and leader of United We Can, had said minutes before the king’s speech.

In this context, Felipe VI has claimed “respect for the social and democratic State of Law in which Spain has been established since 1978” and which has been built “for more than four decades, step by step and shoulder to shoulder, is a precondition and necessary for that coexistence and for the progress of our society “. “Hence, we all – citizens and institutions – must feel committed and obliged to defend, protect and preserve our coexistence in democracy and freedom,” he added.

The “new challenges” of democracy

“Defend it, because we know how difficult it was to achieve it and that there are always risks that can threaten it. Protect it, because we have learned that democracy is a delicate asset that requires the greatest care and permanent respect and dedication on the part of all; because We are aware that its erosion puts in question and, therefore, endangers, the rights and freedoms of citizens. And to preserve it, because we also know that, in accordance with our values, it constitutes an inalienable premise for the full development of our country and for the progress, well-being and prosperity of our citizens “, has settled.

Democracy, the monarch concluded, “through its representative institutions, must always know how to face, with a constructive spirit and without losing its foundations, the new challenges that society faces.”

Previously, Batet had also made a brief mention of Juan Carlos I: “We thus commemorate the determined reaction of our public institutions that, led by His Majesty King Don Juan Carlos, assumed the defense of democracy in the face of the threat of the coup and effectively used their constitutional capacities to defeat the coup plotters “, he assured in his speech.

In the opinion of the president of the Congress, the act of this Tuesday tried to reaffirm “the firm commitment” to “constitutional democracy” that the king pronounced during his proclamation, in 2014. “At a time of pandemic, economic crisis, of social suffering, Spaniards need certainty and hope. Today all the institutions of this great State are here to show our strength and also to reaffirm our commitment to democracy and our constitutional system and, with this, offer certainty and hope “, said Batet first of all the Government.

With her message, the president of the Congress wanted to reaffirm her commitment to the monarchy and clear up any type of doubt about the quality of Spanish democracy: “We proclaim that Spain is a rule of law willing to move decisively in the recognition of rights and in the social justice, a modern and fully democratic country. There is no democracy without institutions, there are no institutions without politics, nor politics without respect and trust. Ladies and gentlemen, it is time to continue winning the future for Spain, “he concluded.