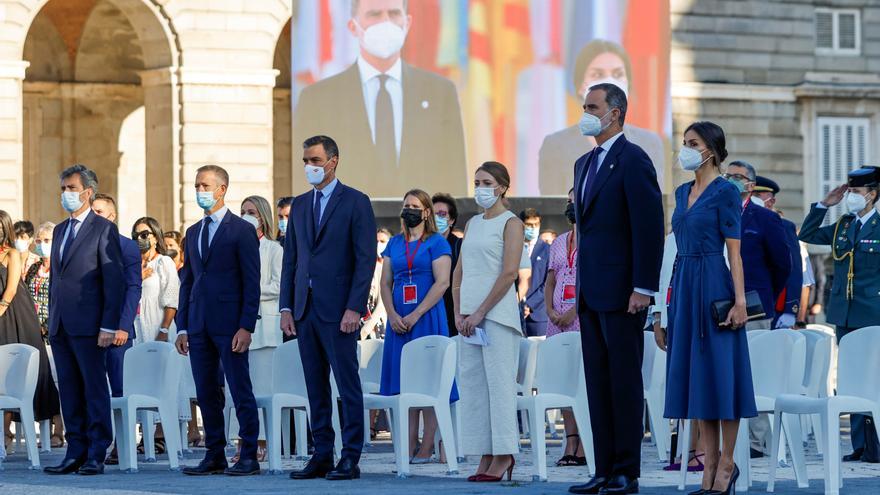 45 minutes without political and partisan controversies with a new call for unity by the king in full opposition war against the government. The powers of the State - with the exception of the Lehendakari, Iñigo Urkullu, and the Presidents of Catalonia and Extremadura, Pere Aragonès and Guillermo Fernández Vara - have once again paid tribute to the victims of COVID-19 and, especially, to the deceased health workers in service during the pandemic, they have received the Grand Cross of Civil Merit. The head of state has been in charge of delivering four of those medals in the presence of 102 families. "You are an ethical and social reference, and a reason for hope for all citizens," said Felipe VI after presenting him with the medals posthumously as a sign of the "infinite gratitude" of the country.

"The evolution of the pandemic constantly reminds us that we must continue with health precautions and that recovery depends on everyone. But we must also have confidence," said the king, who has referred to as axes of that confidence "the best values ​​that have emerged in our society during this crisis —solidarity, generosity, dedication—, and which are equally justified by the continuous advances in scientific and medical research ". "No one should remain indifferent," said the monarch at an event in which all the parties were present, except for Vox and the Catalan independentists - the PDeCAT was represented.

The king has assured that the pandemic "has put all societies to the test" and has "marked a before and after." "It has irrevocably demonstrated how necessary cooperation is in all areas of our coexistence and that, in the face of such serious challenges as this, unity is essential," he said as a message to politicians.

That "society take care of the caregivers" is what María Díaz Diñeiro, pediatric surgeon who has intervened as representative of the families of the deceased health workers, has asked. "I'm here today because my father is gone, as there are no more children, siblings couples ...", he recalled when the first tears of the attendees began to appear. In addition to the medal for his father, Joaquín Díaz Domínguez, the relatives of Jesús Algaba, the oldest doctor who died at the age of 79 in service, and Pablo Riesgo, who, at 26, was the youngest health worker who has died from the coronavirus. It has also been received by the relatives of the gynecologist Nedialka Veleva, born in Bulgaria but of Spanish nationality, who worked in a private clinic. After the deliveries there was a minute of silence.

But the intention of the Government -which opened in this act with its new composition and only Fernando Grande-Marlaska was missing, who had an appointment with the European Interior Ministers- is that this tribute also show the "hope" of exit from the pandemic when there is a week left for 50% of the population to be vaccinated, as the host of the event, the journalist Fernando Ónega, recalled. And the one who has put a face to this new reality has been Araceli Hidalgo, who at 97 was the first person to receive the vaccine in Spain on December 27, 2020, a year after COVID-19 appeared in the city Wuhan china.

"I want to send a message to all health groups that your work and effort have saved and are saving many lives and are saving," he began in his speech, in which he also sent a message to youth, which is the sector of the population that remains to be vaccinated and in which infections are now skyrocketing after a year and a half of restrictions. "I tell young people to respect the pandemic," said Hidalgo, who wanted to remember his colleagues and the workers at the Los Olmos residence (Guadalajara) where he lives.

Between the interventions and the music of the RTVE orchestra and the Orfeón Pamplonés, Moncloa has projected a video in which he tried to show the stories of overcoming that have occurred during the worst pandemic that Spain has suffered in a century. From a young woman who got a 13.96 in the EBAU to a woman who was about to die, like her newborn baby, because of the coronavirus, to a lawyer who decided to change her profession to be a pastry chef because that was what it made him happy.

"Let us honor on this day the memory of those who did not survive this time, keeping intact what every crisis reveals to us, individually and collectively. Let us continue to build in their absence, but with their memory, a better country for the next generations", they have been the king's last words in an emotional act in which avoiding "forgetting" what happened was the main message.